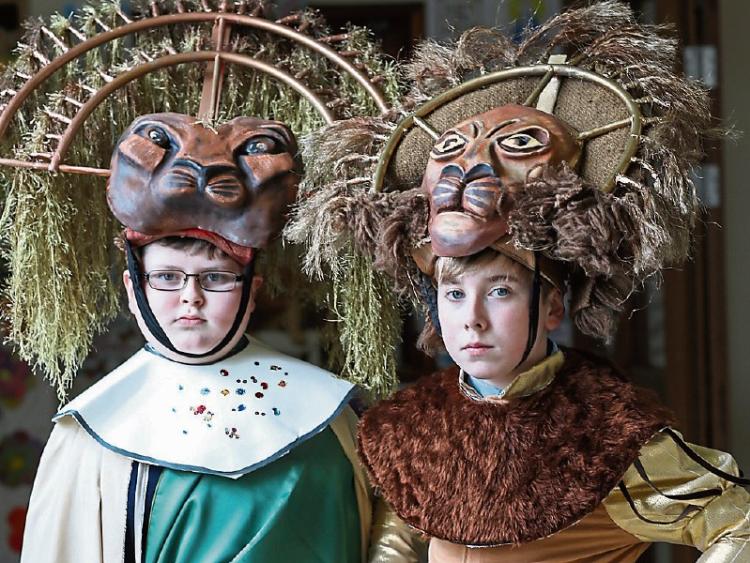 Cathal Walsh as 'Mufasa' and Harry McMahon as 'Simba' in 'The Lion King' by St Mary's CBS pupils.

St.. Mary’s CBS Clonmel is producing the musical ‘The Lion King’ in St. Mary’s Church from Wednesday 16th May to Friday 18th May.

It promises to be a very enjoyable show and is suitable for all ages.

It follows on from last year’s very successful production of ‘Godspell’.

The boys have been very busy in rehearsals since Christmas and are now putting the finishing touches on what promises to be a real treat.

The Lion King has captivated the imagination of audiences around the world both as a film and musical. The African savannah comes to life on stage with Simba, Mufasa, Rafiki and an unforgettable cast of characters as they journey from Pride Rock to the jungle... and back again, in this inspiring, coming-of-age tale.

With classic hits such as ‘The Circle of Life’, ‘I Just can’t wait to be King’ and ‘Hakuna Matata’, there is something in there for all the family. Tadhg O'Donnell Jones as 'Scar' and Ciaran Cotter as 'Rafiki' in the St Mary's CBS pupils' production of 'The Lion King'.

The cast is made up of the boys from the school choir, mainly from 3rd to 6th classes.

However the 1st class pupils will make an appearance also.

Simba, an adventurous and endearing cub who can't wait to be king of the Pridelands, is played by Harry McMahon.

The part of his father, Mufasa, the strong, honourable, and wise lion who leads the Pridelands, is taken by Cathal Walsh.

Tadhg O’Donnell Jones plays the part of Scar, the antagonist of the show, who becomes overcome with jealousy of his brother, Mufasa, and nephew, Simba.

The wise mandrill, Rafiki, who acts as healer of the Pridelands and guides Simba on his journey home is played by Ciarán Cotter.

Zazu, the anxious yet loyal red-beaked assistant to Mufasa will be played by Sam O’Sullivan.

Other parts include Peter Carroll as Nala; Jake Byrne as Sarabi; Seán Wall and Seán Darody as Timon and Pumbaa; and Briain Hickey, Caileann Morrison and Nikita Kovacsinov as the three silly Hyenas.

Early booking is advisable to avoid disappointment. The show promises to be a real crowd-pleaser so come along and support the boys of St. Mary’s C.B.S.