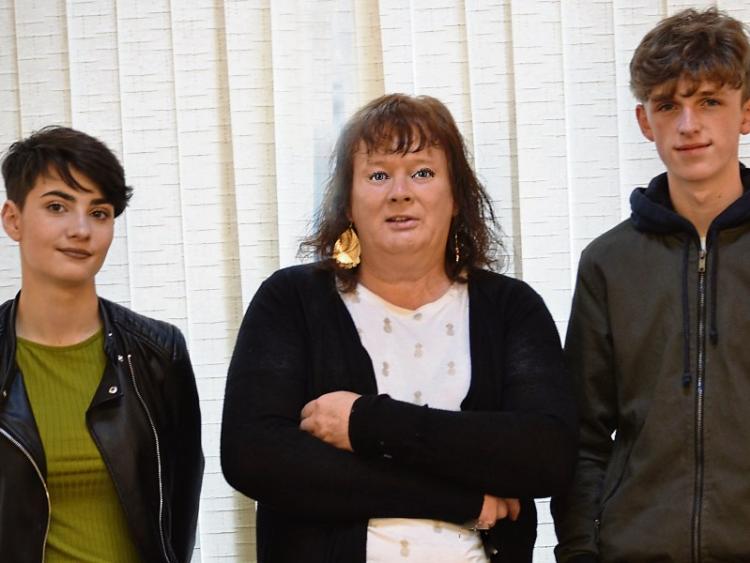 Sarah Berry, Jane Houlihan and John Carey are the principal exhibitors in an exhibition that's currently running at Clonmel Library. The exhibition continues until Friday, June 8

An exhibition of painting, photography and sculpture is currently running at Clonmel library and continues until Friday, June 8.

In the following article Sarah Berry, one of the exhibiting artists, discusses comfort zones, being a young artist and taking yourself seriously –

“Hi, I’m Sarah. I’m eighteen and I’m an artist. Yeah, an artist, I know. Not the most secure career option, right?

“Some of you may be thinking something along the lines of ‘ah, she’s young, she’ll find a real job in time’, or maybe (hopefully) something more like ‘wow, good luck with that, it’s not easy but I’ll support you’.

Honestly, I expect the former from most people, and that’s said with as little judgement as possible.

“I can see why people might think it, art, is notoriously a dead-end job, a pipe-dream. More often than not an artist is portrayed as tormented and lost, failing and working a soul-crushing nine-to-five in a cubicle.

“Hardly ever do you actually see an artist (of any kind) portrayed as successful and living a fulfilling life.

“There have been times in my ‘artistic journey’ when I’ve given up, not touched a pencil and paper for months at a time, except for when in art class in school, where I didn’t really have much of a choice.

“Those times were some of the worst for me, and that’s because art is so much more than just painting some pretty pictures.

“From a young age I have been described as the artist of the family. Each of my siblings had their ‘thing’ that they would do, for my sisters it was photography and sports, for my brother it was computers or martial arts.

“I never saw art as my ‘thing’, I never took myself seriously as an artist because for so long I was lead to believe that art really isn’t a viable career. It would take me months upon months just to fill a small sketchbook, and I never felt like I was improving. Spoiler alert: it’s because it was taking me months to fill a sketchbook.

“It’s only in recent months that my mindset towards art has shifted, and I can see myself making something of it. For once, I’m taking myself seriously. Now I just need other people to do the same. It’s not helped by the fact that I’m so young, people still often see it as me chasing a pipe-dream.

“I often feel a need to prove myself to people, which isn’t the easiest of things after years of stagnation, but this exhibition feels like my opportunity to change that. The deadlines and pressure, and belief from just one or two people, were what I really needed to get myself in gear and go for it, and what better place to hold it than in the local library?

“I have always been unreasonably happy when surrounded by books. As a child I used to escape away into them for hours at a time, losing myself between the pages and diving head-first into the vivid worlds created in my mind.

“I find a lot of comfort in bookshops and libraries, I could spend hours just roaming through the shelves, making mental notes of which titles to pick up next. I find a lot of inspiration from books too, and have often considered freelance illustration.

“Often when I was younger I would draw my own versions of characters from stories. Now, I use books for inspiration somewhat differently - don’t know how to draw birds? Library has books filled with birds. Plants? Library has that too. Any kind of reference or information you could possibly need, you can find in a library.

“This isn’t of course just in relation to art - make use of them for projects or research work, or even just a quiet place to relax and be alone, when the outside world gets to be too much.

“Holding the exhibition in the library makes me feel so at ease with the whole event. Normally there wouldn’t be a chance that my art would see the outside of a drawer in my bedroom, but somehow this feels  different, almost like I’m showing it to an old friend that I know won’t judge me too harshly.

“Exhibiting my work feels like a step in the right direction; a step towards taking myself seriously, other people taking me seriously, and proving that art is more than just a hobby and can be a real, fulfilling career”.