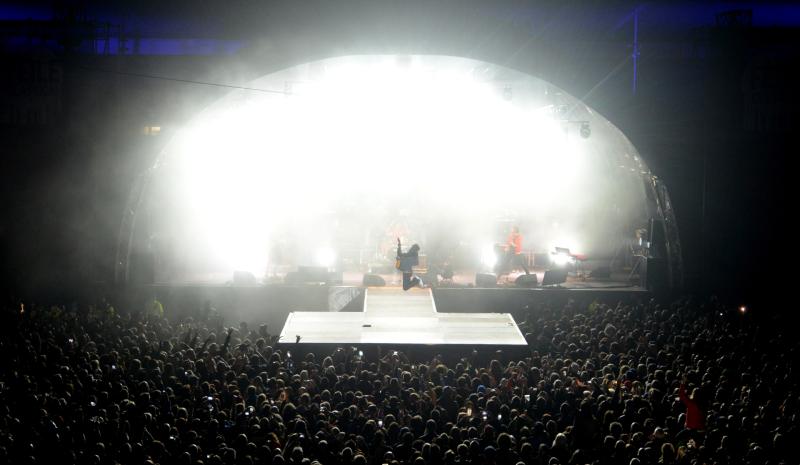 The Stunning's Steve Wall performing at Feile Classical at the weekend

Thurles could be set to welcome a host of big name music acts in the future following the success of this weekends Feile Classical which saw nearly 20,000 music fans descend on the town for a two day festival.

Semple Stadium Chairman Con Hogan said he was “delighted with the two day event" adding that it “exceeded all expectations.”

“We owe a lot to CWB Management who put on a fabulous show and having Tom Dunne on board was a key component. He was a great guy to work with,” Mr Hogan told the Tipperary Star.

The chairman said that the Semple Stadium Committee will now carry out a complete review of the event in October before making their final decision on whether to stage a similar music festival in 2019 but that he felt positive the venue will play host to big name acts again in the future.

“We've tapped a certain market age group with Feile and the demand is certainly there. My view is that we will hopefully run something similar again next year. We had in excess of 20,000 people in Thurles over the weekend and every sector felt the spin off. The hotels and B&B's, restaurants and pubs benefited greatly,” he said.

The event, which hosted big name Irish acts The Stunning, Something Happens and An Emotional Fish, is estimated to have brought a socioeconomic boost of €18 million to the region.

Speaking following the success of Feile Classical Paul Boland and Joe Clarke of CWB.ie said: “Bringing Trip to Tipp back was a long time dream of mine and for the first production to land with such success is a tribute to the Irish Chamber Orchestra, all of the legendary bands, all of the crew who had our backs 24/7  the statutory bodies, all at Semple Stadium and the people of Tipperary who pulled together to make it such a great weekend”.

“Feile Classical was a celebration of all things from the FMC music trail of Thurles town to the eco-glamping, from Late night partying in the Premier to raving to The Prodigy at the Greyhound Stadium, from the pitch invasions to the soulful performance of Linger! Now, we are going to take a brief pause to take it all in and plan what happens next live at Semple Stadium but in the meantime watch out for a live album of the show  to be announced and the in-demand merch is available from our website," continued CWB's Joe Clarke.