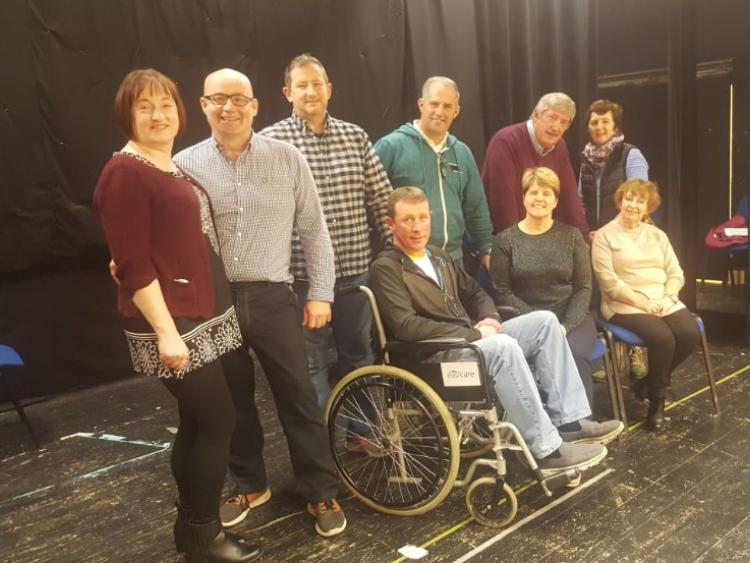 Moyne Drama Group stage the hilarious Out of Order

Moyne Drama Group will take to the stage with their 2019 Production of the hilarious Ray Cooney comedy Out of Order on Thursday night, January 24 and running until Sunday, January 27 in Moyne Community Centre.

When Richard Whilley (Ger Jones) a Government Junior Minister, plans to spend the evening with Jane Worthington (Geraldine Delaney), one of the Opposition’s typists, in the Westminster Hotel, things go disastrously wrong beginning with a body (Ailbhe Hayden) trapped in the hotel’s only unreliable sash window.

Desperately trying to get out of an extremely sticky situation, Richard calls for his hapless private secretary, George Pidgen (Ken Murphy) who, through Richards’ lies, sinks further and further into trouble with everybody, and ends up going through an identity crisis.

Things go from bad to worse with the arrival of Jane’s distraught husband (Seamus Doran) and with the addition of an unscrupulous waiter (Liam Troy), Chamber Maid (Maureen Claffey), Hotel Manager (Mary Leahy) and the Minister’s wife Pamela (Mary Campion), things really come to a head!

The talented cast have been rehearsing since early October under the direction of Joanne Bannon.  The set is nearing completion under the watchful eye of Jason Moore ably assisted by Tony Leahy, Michelle King and Liam Troy.  We acknowledge, in particular, the assistance of Loughmore Drama Group and their stage manager, Tommy Sweeney, for providing the very essential “sash window” to complete the interior of Suite 650 at the Westminster Hotel.

Tickets will be available on the door priced at €12 and concessions are available for OAP’s and children.

So, if you’re sick of talk of Brexit, come and enjoy some true British humour at its finest by one of the masters of farce. Curtain goes up at 8.15pm nightly and we hope to see you all there.