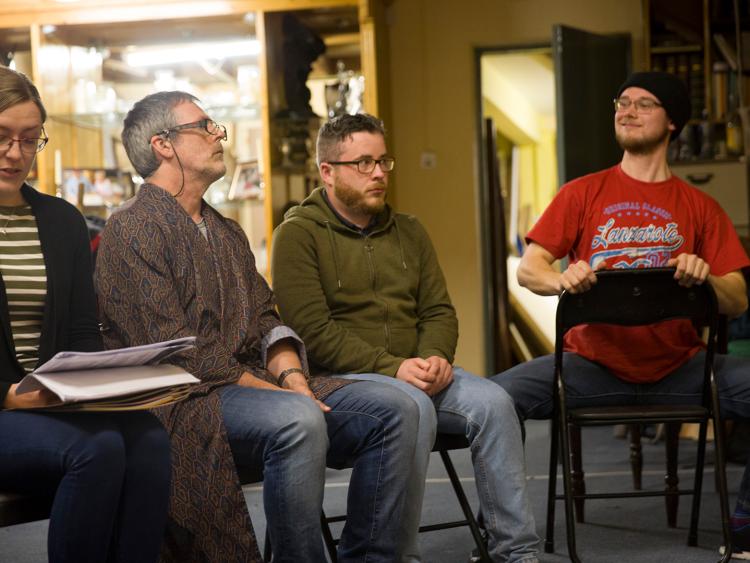 Heather Broad as Candy, Donal Bray as Harding, Joseph Mulcahy as Scanlon and Adrian Fahy as McMurphy in the Nenagh Players production of One Flew over the Cuckoo’s Nest

Nenagh Players are delighted to present One Flew Over the Cuckoo’s Nest written by Dale Wasserman (an adaptation from the 1963 novel by Ken Kesey) and directed by Kevin Whelan at Nenagh Arts Centre from Wednesday, November 13 to 17 nightly at 8pm.

One Flew Over the Cuckoo’s nest was also made into a film in 1975 directed by Miloš Forman and starring Jack Nicholson.

The play tells the story of Randle Patrick Mc Murphy, a crook about to face a short prison sentence, who claims insanity in a plan to escape prison labour. His plan backfires when he is sent to a mental asylum where he befriends the other patients, tries to liven up the place and rebels against the oppressive iron fisted Nurse Ratched.

Long standing member of the group, Kevin Whelan, will direct his first full length play this year after successfully directing many one acts and dinner theatre short plays.

Kevin previously directed Brian Friel's hilarious comedy The Communication Cord with Lissenhall Players in 2018 and he will bring a great level of expertise to the role.

A gala night will be held on opening night, Wednesday November 13, in support of Nenagh Special Summer Camp.

There will be a cheese and wine reception from 7pm to 7.45pm in Rocky O’Sullivan’s Bar, Kickham Street, Nenagh prior to the performance.

Tickets for the gala night cost €20 and can be purchased from any Nenagh Special Summer Camp or Nenagh Players Committee member.

Tickets for the remainder of the performances cost €16/13.