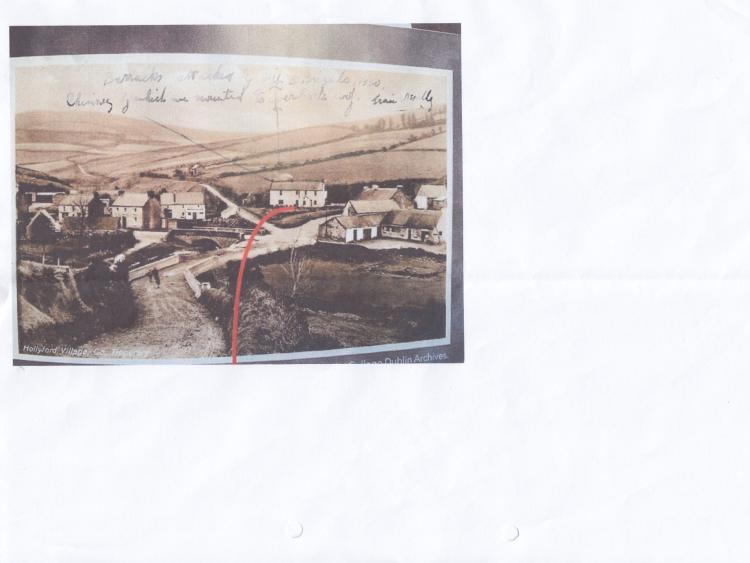 Hollyford Barracks as depicted in an old postcard

Commemoration of the burning of Hollyford, Drangan, and Rearcross barracks postponed

The members of the Third Tipperary Brigade were ordinary law-abiding men and women – unless, of course, they were engaged in the fight for their country’s independence.

Once they donned the mantle of rebel they actively engaged in all types of seditious and rebellious behaviour. They interfered with the Royal Mail. They blocked or cratered the King’s highway. They stole explosives and military equipment. They ostracised and attacked members of the crown forces, his majesty’s keepers of law and order. They sniped at RAF planes. And they enthusiastically indulged in bouts of arson and pyromania – on his majesty’s police barracks.

Beginning in January 1920 the Volunteers began a series of armed attacks on RIC barracks. The assaults began in the Second (Mid) Tipperary Brigade area. But they quickly spread to the East Limerick and the other two Tipp Brigade areas. The attack on Hollyford RIC barracks on 10/11 May has a special place in the annals of the Third Brigade. That was because it was their first such operation, new tactics were utilised, and the attack was relatively successful. So, who were the men who planned and carried out the operation?

Brigadier Séumas Robinson, the Third Brigade’s Commander, authorised the action on his own authority. He also led it, taking a very active part and placing himself in the most exposed and dangerous position.

He was ably assisted by his Vice Brigadier, Seán Treacy. He accepted the perilous task of leading the squad of rifle-armed Volunteers tasked with suppressing the fire of the besieged Peelers.

The Brigade’s Intelligence Officer, Tom Carew, Anacarty, was present. That was understandable as he had founded the Anacarty Volunteer Company in 1917 and had been active locally for three years previously.

The fourth involved Brigade officer was Ernie O Malley. He carried a lot of authority as he was GHQ’s man in South Tipp. But he was also a very hands-on leader.

Hollyford was situated in the area of operations of the Brigade’s Third Battalion (Dundrum). The Battalion Commandant was Tadg Dwyer, Grovestown, Dundrum. He was an astute commander and Robinson entrusted him with the task of organising the particulars and logistics of the action.

His Vice Commdt. was Ned O Reilly, Rossmore, a very active, ruthless Volunteer. Earlier on the morning of 10 May himself and a fellow Rossmore Volunteer, Jack Ryan (Master), had ambushed a RIC patrol and killed a sergeant near Clonoulty.

Phil Fitzgerald, Glenough, was the Batt. Adjutant. He kept a record of all the Batt’s operations and of its members and their activities. He also helped store and transport rifles and revolvers.

Present too was the Batt’s Quarter Master, John C, Ryan, Anacarty. He had responsibility for storing the available weaponry and explosives. An accomplished rifleman, he was also well experienced in sniping at barracks in Clonoulty and Anacarty. In Hollyford he fought sa bhearna baoil beside Seán Treacy.

The Batt’s Intelligence Officer, Patrick Quillinan, Anacarty, transported arms from the Tipperary Town Battalion to the site of the action.

There were 111 members in the Hollyford Volunteer Company. All of them, with one exception, participated in the operation. Ironically enough, the exception was the Coy. Captain, Patrick O Dwyer, Gurth. He’d been arrested during the second week of the previous March. He’d been sent to jail in Cork for possession of seditious documents.

The local Volunteers were led by the Coy.’s First Lieutenant, Jim O Gorman. He’d served in the Australian army during the Great War, and was a crack marksman. He was also one of the few professionally trained soldiers in the Batt. He organised the local Volunteers and allotted their duties to them. He also convinced Séumas Robinson to change the method of attack. Previous efforts to breach barracks’ walls had been unsuccessful. He pointed out that the weakest part of the fortress-like building was its roof. Robinson accepted his reasoning. Tadg Dwyer contrived the means of getting the attackers up the forty feet onto the roof.

While no woman actually participated directly in the attack, a number of them played an indirect part. In her submission to the Military Services Pension Commission, Catherine McGrath, who was Adjt. of both the Anacarty Company and the Third Battalion of Cumann na mBan, stated that she stored arms and ammunition and billeted men before and after attacks on local barracks.

Bridget Heffernan, President of the Rossmore Coy. stated to the MSPC that she regularly stored weapons and explosives for the Batt. Adjt. Phil Fitzgerald. In her submission she wrote,
“In May 1920 Hollyford Barracks (about 2 miles from my home) was attacked. The following morning P. Fitzgerald and R. Hanly gave me 2 rifles, 1 revolver and about 10 hand grenades. These remained in my possession until late in July when they were removed by same men to go to attack at Rearcross. I still had detonators and crude bombs.”

In fairness to him, Fitzgerald appreciated her dedication to the fight for freedom – he later married her.

The “Comóradh na nÓglach” group had detailed and interesting plans to commemorate the burning of the barracks in Hollyford, Drangan, and Rearcross with a number of activities scheduled for the second weekend of next May. However, due to the Covid 19 emergency all those plans and commemorative activities are now definitely cancelled and shelved.