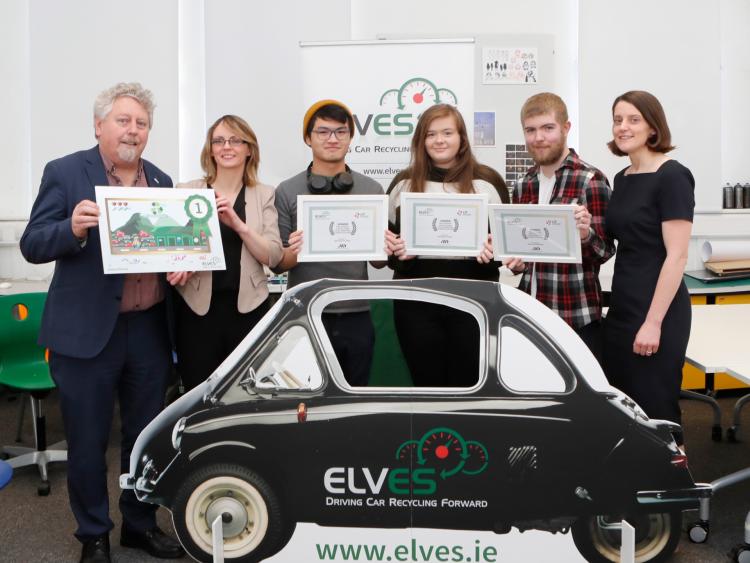 Samantha O’ Keeffe from Tipperary Town and Conor Burke from Thurles were both named winners in the motion design competition which helped to raise awareness about how End-of-Life Vehicles (ELVs) in Ireland should be processed correctly.

As the compliance scheme for the End-of-Life Vehicle sector, part of ELVES remit is to create public awareness about how people should correctly scrap their cars and small vans, once they are no longer roadworthy.  To help achieve this aim, ELVES partnered with Limerick School of Art and Design LIT to task some of its students with creating commercial standard video animations which would best convey this message.

Through a collaborative process including briefing, research, brainstorming and refinement the gifted third year LSAD Animation & Motion Design Students met the challenge with talent to spare.

After intense deliberation by ELVES, the winners were announced.

The overall winning animation is entitled ‘8-Bit’ and is a team effort by students David Ng Yee Shian, Limerick, Michael McNamara, Askeaton and Samantha O’Keeffe, Tipperary Town. Their inspiration comes from portraying the journey of an End-of-Life Vehicle as an 8-bit video game, a message format which resonates with many younger age groups as well as older ones.  The quality of this winning video was exceptional and was deemed to be of the standard of a professional design and animation studio.

Two runners-up groups were also awarded prizes and the judges were generous in their praise for the distinctive animations.

The animated video created by Conor Bourke, Thurles and Sinead Mitchell, Limerick is an extraordinary 3D animation which visually and vividly explains the process of what to do when your ELV reaches the end of its road and what parts of the car can be reused and recycled.

Commenting on the project, Elena Wrelton, Compliance Manager ELVES said, ‘ELVES’ objective is to promote and improve the processing of End-of-Life Vehicles in Ireland. The reason we linked up with Limerick School of Art & Design (LIT) was that we were intrigued to see how these talented students would look at the ELVES message in a fresh way and so through their animations, help us to communicate to the public about how to correctly scrap an ELV. The students and the lecturers certainly didn’t disappoint. We at ELVES have been very impressed by the calibre of the entries, all so different, all so accomplished.  We could only pick one overall winner, but it was a very difficult decision. The future of animation is safe with these students.”

David Phelan, Animation & Motion Design Lecturer at Limerick School of Art and Design (LIT), added, “Having the opportunity to work on an industry brief, which has to achieve real life objectives for a client is an invaluable opportunity for our students.  Seeing what works and what doesn’t, where you can be creative and where you have to fit into certain parameters are valuable skills. A competition such as this challenges the students and helps to equip them with these skills into the next stage of their experience. We were delighted to partner with ELVES on this project.”