Tipperary Museum of Hidden History is delighted to welcome visitors back

The Tipperary Museum of Hidden History in Clonmel has reopened its doors to the public.
Since closing last December due to the Covid-19 restrictions, staff at the museum have been working tirelessly, assisting the public with queries and creating online content, which has received rave reviews.
Marie McMahon, curator, is delighted to open the long-anticipated and brilliant new War of Independence Exhibition, which will be available to view inhouse and online in the coming weeks.
“We are delighted that our Covid-19 safety protocols are in place and we are so looking forward to greeting both new and loyal visitors to the Tipperary Museum of Hidden History in Clonmel,” she stated. 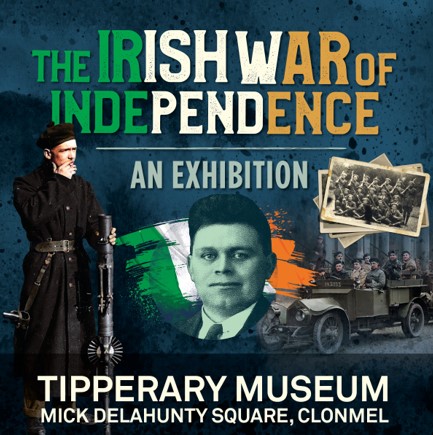 Above: The poster for the Irish War of Independence exhibition, which will be available to view online and inhouse at the Tipperary Museum of Hidden History in Clonmel in the coming weeks

The Tipperary Museum of Hidden History is this year celebrating 21 years at Mick Delahunty Square, Clonmel.
To mark the occasion the museum have placed additional artefacts relating to the late, legendary musician Mick Delahunty on display and relaunched its CD Rediscovery of Mick Delahunty’s Lost Recordings with Clonmel Community Garda Kieran O’Regan.
The recordings of several Mick Delahunty shows in Clonmel and Waterford, which hadn’t been heard in over 73 years, were discovered on four vinyl discs at the Tipperary Museum of Hidden History during renovations.
The tracks were recorded in 1948 but never released to the public and were forgotten about until recently.
Since The Nationalist covered this project in the past year, Marie McMahon says “we have been inundated with requests for the CD and to date we have sent over 3,000 copies to people across the world”.
“They have been sent to China, Sweden, Australia, England, Scotland, USA, Canada, France, Italy, Switzerland, Holland and of course every corner of Ireland.
“If you would like to receive a CD please send us your name and address and we will post it to you anywhere in the world,” she stated.
The ten tracks include many standards that Mick Del made his own including Little Brown Jug (with a spoken introduction), You Made Me Love You, I Wonder Who’s Kissing Her Now, Danger Ahead and American Patrol.
Based in Clonmel, Mick Delahunty and his big band were one of the country’s most popular acts and a fixture on the Irish ballroom scene for 50 years.
Contact museum@tipperarycoco.ie or call 076-1065252 to book a time to visit the museum or order a CD.
The Mick Delahunty CD project was jointly funded by Creative Ireland and Age and Opportunity.