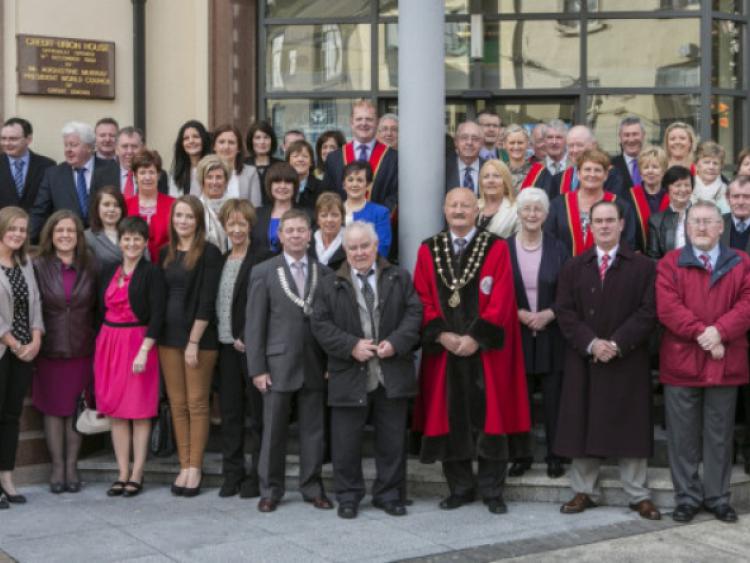 CLONMEL CREDIT UNION which this year celebrates the 50th anniversary of its founding in 1963 was accorded a civic reception by Clonmel Borough Council at the Town Hall on Friday night last.

From its humble beginnings in August 1962, amongst a small group in the Clonmel Mental Hospital Benefit Society, to the proud institution that it is today, the journey of Clonmel Credit Union was deservedly honoured before a widely representative attendance in the Council Chamber.

Mayor Councillor Billy Shoer, in bestowing the highest honour that the Borough Council could give, paid tribute to the present and former voluntary members, and permanent staff alike, recognising their commitment and contribution to the financial wellbeing of the membership and also delivering a great service to the community over the past fifty years.

In glowing appreciation, Mayor Shoer said: “The Clonmel Credit Union is the singular most important organisation to be established in Clonmel over the past 50 years, and we can attribute the success of the Credit Union to the quality and dedication of the people entrusted to carry on the aims and vision of the movement over the past half century.”

The Mayor detailed the progress in all aspects of the community-based body from its St. Luke’s Hospital inception to the Boys Club in Sarsfield Street, later on to 17 Irishtown, later still to the old CIE Depot at Nelson Street, before eventually moving to its magnficent offices on the site of the old Ritz Cinema in Parnell Street, now under the management of Paul Davey.

In all that time, each year saw progression in every sense, membership numbers, savings, loans, so that today Clonmel Credit Union proudly stands with 25,000 members and E140 million in assests, serviced by 29 permanent staff and 19 volunteers.

But the Mayor was quick to point out that “the Credit Union can never be measured by statistics alone in how well it has served its members and the wider community. Over 50 years in existence you have never lost sight of your motto - ‘Not for profit nor for charity - but for service’.”

It was a sentiment expressed by speaker after speaker, each praising its community base, the volunteers, the excellent staff, the willingness of the movement to step in when no one else would, the sponsorships and promotions, the talent and art competitions, and everything else that made Clonmel Credit Union much much more than any ordinary High Street financial institution.

The official motion: “That we the members of Clonmel Borough Council, acting for and on behalf of the citizens of Clonmel, hereby accord a civic welcome and reception to Clonmel Credit Union in recognition of its 50th anniversary and its contribution to Clonmel, and environs since 1963” was proposed by Cllr. Siobhan Ambrose and seconded by Cllr. Darren Ryan.

Reflecting on the esteem in which Clonmel Credit Union is held, Deputy Hayes aptly described it as “among the finest movements with the best group of volunteers in the country.”

Accepting the honour on behalf of the Credit Union, President Seamus Moore, acknowledged the appreciation of the organisation for the exceptional generosity bestowed on them by the Mayor and Borough Council.

In a wide-ranging speech the president covered many areas but was at pains to state, first and foremost, that the Credit Union organisation was about putting people before finance. He went on to praise the massive contribution of all volunteers, many living some now deceased, over 50 years. In a specific reference to the founders 50 years ago he said “The Credit Union today is their legacy and I salute them.”

At risk of selecting individuals, Seamus Moore gave special mention to three individuals on the night:

The late Paddy Watchorn, president for four years and ILCU board member for 18 years. Paddy was held in high esteem at national level culminating in his election as President of the League. This bestowed a great honour on Paddy, his family and indeed Clonmel Credit Union.

Kathleen Halpin, president on five occasions, more than any other, and involved for 37 years with Clonmel Credit Union.

The president also praised the manager Paul Davey and staff whom he said “have been a critical success factor in maintaining and building the relationship with our members. It would be hard to imagine the Credit Union with its 25,000 membership if it wasn’t for the ongoing efforts of the team,” he added.

Referring to the membership in more detail, Seamus Moore stated that “the members of the Credit Union are what it is all about.... they are the owners of the Credit Union and like any co-operative it is run for their benefit.” Proudly he stated, “Each and every year our membership has grown even when there were nine more banks on the high street than there are today.”

Turning to social responsibility the president spoke of an “ongoing struggle with illegal moneylenders and those that seek to profit by preying on the more vulnerable.” Quickly adding “It is precisely at such times that we should extend a helping hand to those that particularly need it.”

Over its first half century of existence in serving this local community, many have given great service to Clonmel Credit Union from St. Luke’s to Parnell Street. However, if one individual was to deserve special mention it would be someone whose name is now synonymous with Clonmel Credit Union.

First as a volunteer, then long-time employee and manager, and again now as volunteer, no one has given more to this success story than Tony Brosnan.

Every member who spoke at Friday night’s reception lauded Tony for his management and leadership of Clonmel CU over a 30-year involvement.

Mayor Shoer regaled the Chamber gathering with anecdotes of financial dealings in the early 1970s with a younger Tony Brosnan, but on a more serious note he stated that the town was honoured to select Tony as Grand Marshall for this year’s St. Patrick’s Day Parade, a personal honour but also an honour for the movement in general.

Referred to as “St. Anthony” by Cllr. Ambrose, as “Uncle Tony” by Cllr. Ryan, and by MEP Phil Prendergast with a song of his own “There’s Only One Tony Brosnan,” it seemed each speaker had a special little story to tell of the long-time manager of Clonmel CU. However, all were singing from the one hymn sheet in acknowledging that Tony Brosnan had played a huge and significant part in the growth and development of the organisation over a working lifetime and still today in to his retirement. Hopefully that will continue well into the future.

Finally towards the end of the formalities, gifts were exchanged and the Mayor presented a magnificent framed photograph of St. Patrick’s Well, magically illuminated at night, which will be given a place of honour in the Parnell Street headquarters. The photo was taken by Clonmel Camera Club member and Borough Council staff member John Fogarty. The Mayor quipped that “it is said that St. Patrick’s Well never runs dry and we are sure Clonmel Credit Union will never run dry either.”

The Mayor then invited all present to join him for refreshments.

Footnote: Earlier in the evening a plaque to commemorate the golden jubilee of Clonmel CU was unveiled at the Parnell Street office by the Mayor. Cllr Shoer. Following the unveiling, Mayor, Borough Council members and Credit Union staff were led from the Clonmel Credit Union offices up Parnell Street by Banna Chluain Meala with a colour parade. It was a lovely gesture by one proud local organisation to another, epitomising the community spirit that both proudly stand for. Take a bow BCM.

The names behind the early days of Clonmel Credit Union

In total there has been 22 presidents of Clonmel CU.

The full-time managers of Clonmel Credit Union down the years have been Tommy O’Keeffe (R.I.P.), Brian Walsh, Danny Marshall (R.I.P.), Tony Brosnan (1980 to 2010) and Paul Davey.