Our Tipperary series: Borrisoleigh - a small town with a big heart 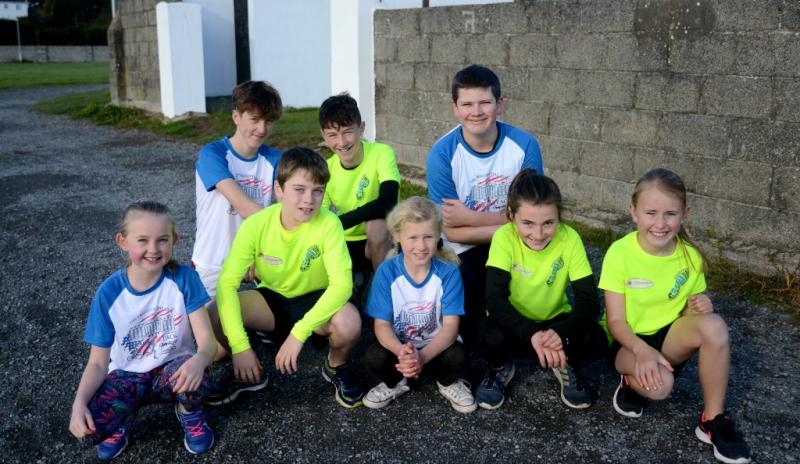 It’s a mark of a community’s strength when an entire town lines out on a cold and wet November night to lend their support to a family in their time of need.

Last weekend, thousands gathered in Borris-Ileigh’s GAA grounds for a charity fundraising match in aid of 31-year-old teacher Amanda Stapleton, who was diagnosed with an inoperable brain tumour last summer.

For those who had travelled from neighbouring towns and counties to watch the game between legendary Tipp and Kilkenny hurlers it was a prime opportunity to see old rivals battle it out on the pitch once more, but for the locals it was an opportunity to show the strength and resilience that lies within the parish and support the Stapleton family.

Steeped in history, the parish of Borrisoleigh has produced everything from famous Saints and church missionaries, artefacts of great historical importance (a 12th Century bell shrine, now housed in the British Museum, was rediscovered in a tree trunk in the townsland of Kilcuilawn after being hidden for centuries from looters) to sporting greats and an internationally renowned drinks brand.

With a population just shy of 800 people, Borrisoleigh falls somewhere between a small town and a big village. It has its own industries, including Oscar Wilde Water, a refrigeration company and a thriving sportswear and equipment business. Its education system is second to none, with an impressive secondary school known to deliver a slew of Young Scientist winners and a primary school catering for 184 local children.

On the day I visit Scoil Naomh Cualán National School, Kay Ryan is finishing up her tenure as principal, having helped educate two generations in Borrisoleigh over her 35-year career.

The school, which amalgamated St. Patrick’s Boys NS, St. Theresa’s NS and neighbouring Fantane NS in 2014, is spread across two separate buildings into a junior and senior school as well as an ASD unit. However, plans are in place to create a single building to cater to the area’s growing population.

“It’s an emotional day leaving after all these years but I had a wonderful time teaching here,” says Mrs Ryan, surrounded by the multiple bouquets and gifts from her esteemed colleagues and friends.

“I started teaching in the boys school in 1983 so now I’m meeting the parents I would have taught starting out at the school gates collecting their own children, which is just lovely,” she adds.

Mrs Ryan says one of her proudest legacies from her time at the school is the recent creation of a nature play trail which she hopes will help foster a love of the outdoors in future generations of Borrisoleigh. 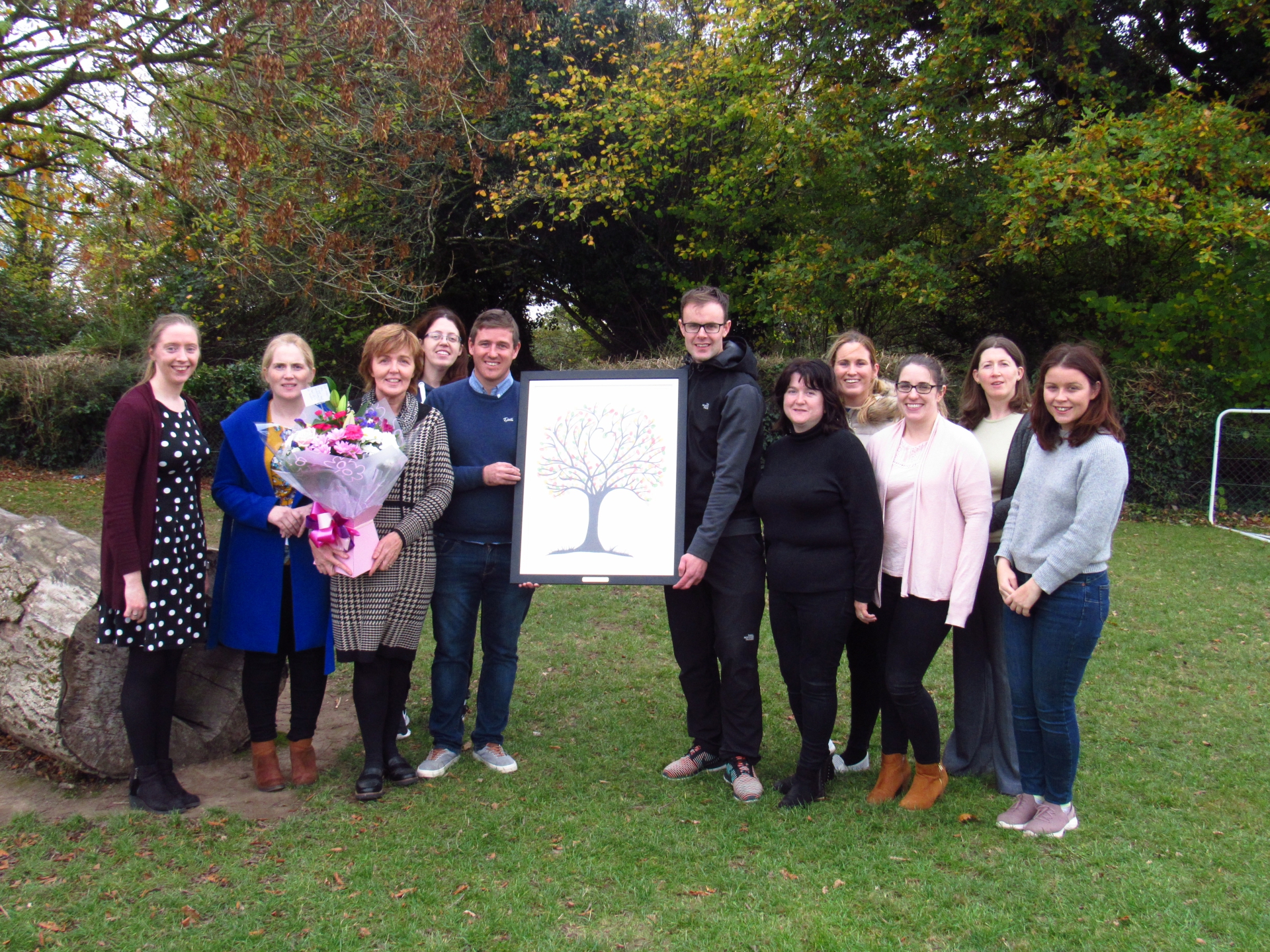 Like other small towns and villages, the landscape of Borrisoleigh’s main thoroughfare has experienced significant changes, most notably in the loss of small family-run businesses and shops.

In the past Borrisoleigh’s main street counted over a dozen pubs, grocery stores, draperies, a sweet shop and a blacksmith according to local undertaker Seamus Kennedy.

“That was in the 50s but they’re nearly all gone now,” he says sadly.

In 2016 the town was dealt a sickening blow following the closure of the C&C Gleeson water bottling facility, resulting in the overall loss of more than 200 jobs and ending a near 60-year tradition of drinks manufacturing in Borrisoleigh.

However in June this year the fortunes of the town looked to be revived following the announcement that a Mayo-based company, specialising in glass bottled water for high end restaurants and hotels, would move into the disused plant.

Oscar Wilde Water pledged to invest €3 million in developing the brand, creating up to 100 jobs for the area. To date the company employs a workforce of 20, many of whom worked at the former Gleeson site.

“The plan is to have 100 people working here within the next 18 months,” explains director of operations Frank Cooney, another former C&C employee.

“I added up the years of experience of our staff the other day and between the 20 of us we had a combined 285 years of knowledge between engineering, manufacturing and production experience,” he says, acknowledging the innovation of entrepreneurs Rory McLoughney and John Hegarty who decided to move their business to the Tipperary beauty spot to avail of its award-winning water source. 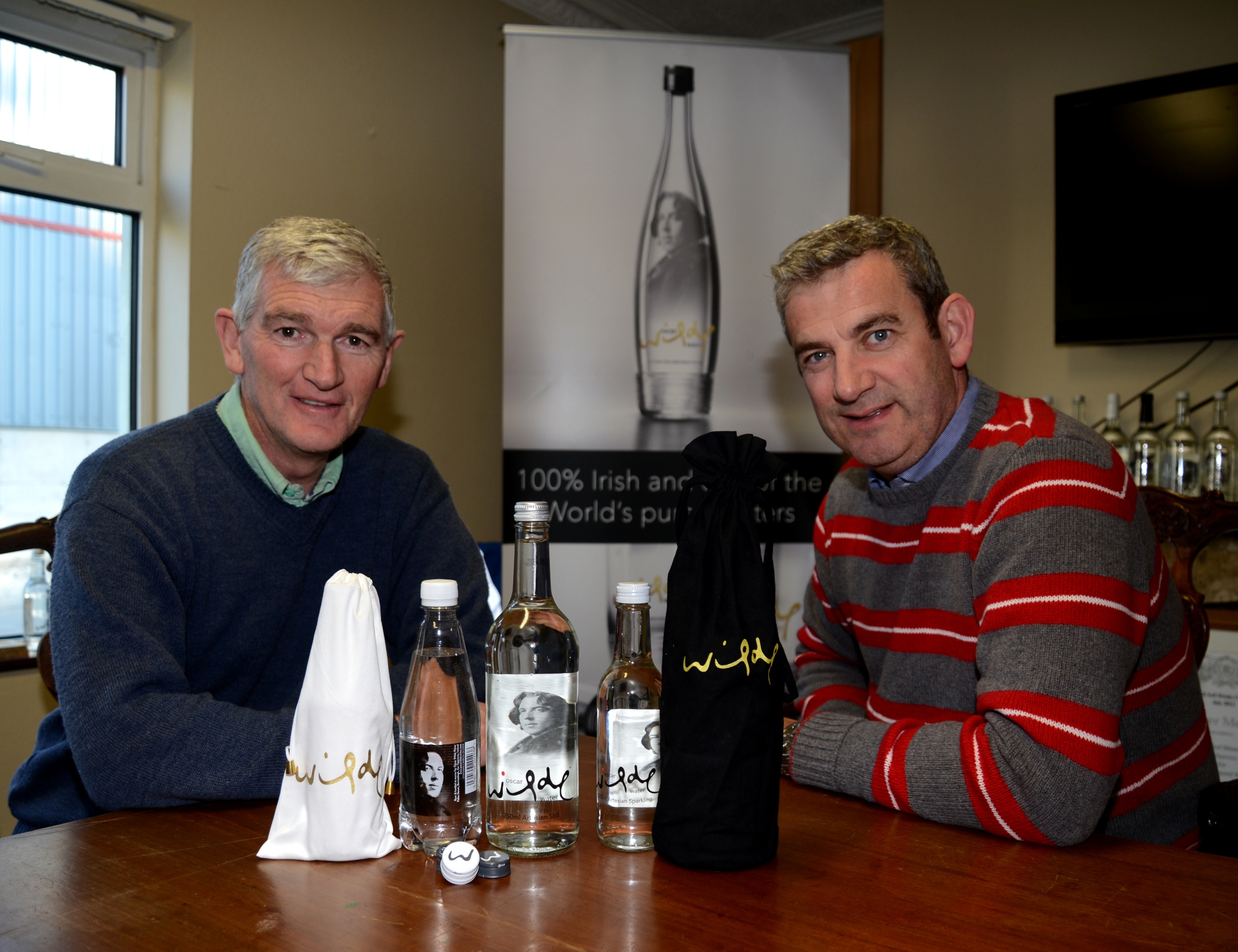 While the parish has long boasted a successful GAA scene, the town has also launched a hugely successful festival in recent years which has become a highlight in the parishes summer calendar attracting upwards of 2,000 spectators annually.

In July 2013, the year of The Gathering, local publican Joe Loughnane called on the wider community to come together and host their own event.

Following that initial meeting in Finn’s pub the Borrisoleigh Festival Committee was born.

“That first Gathering event was a real turning point for Borrisoleigh because it helped pave the way for the annual festival every summer, then we saw the Track Attack forming and a brilliant historical group which are one of the most active societies in the county,” explains festival committee member Fiona Max.

“The whole concept of bringing the community together just clicked immediately with everyone and we had this huge volume of people willing to volunteer and get involved.” 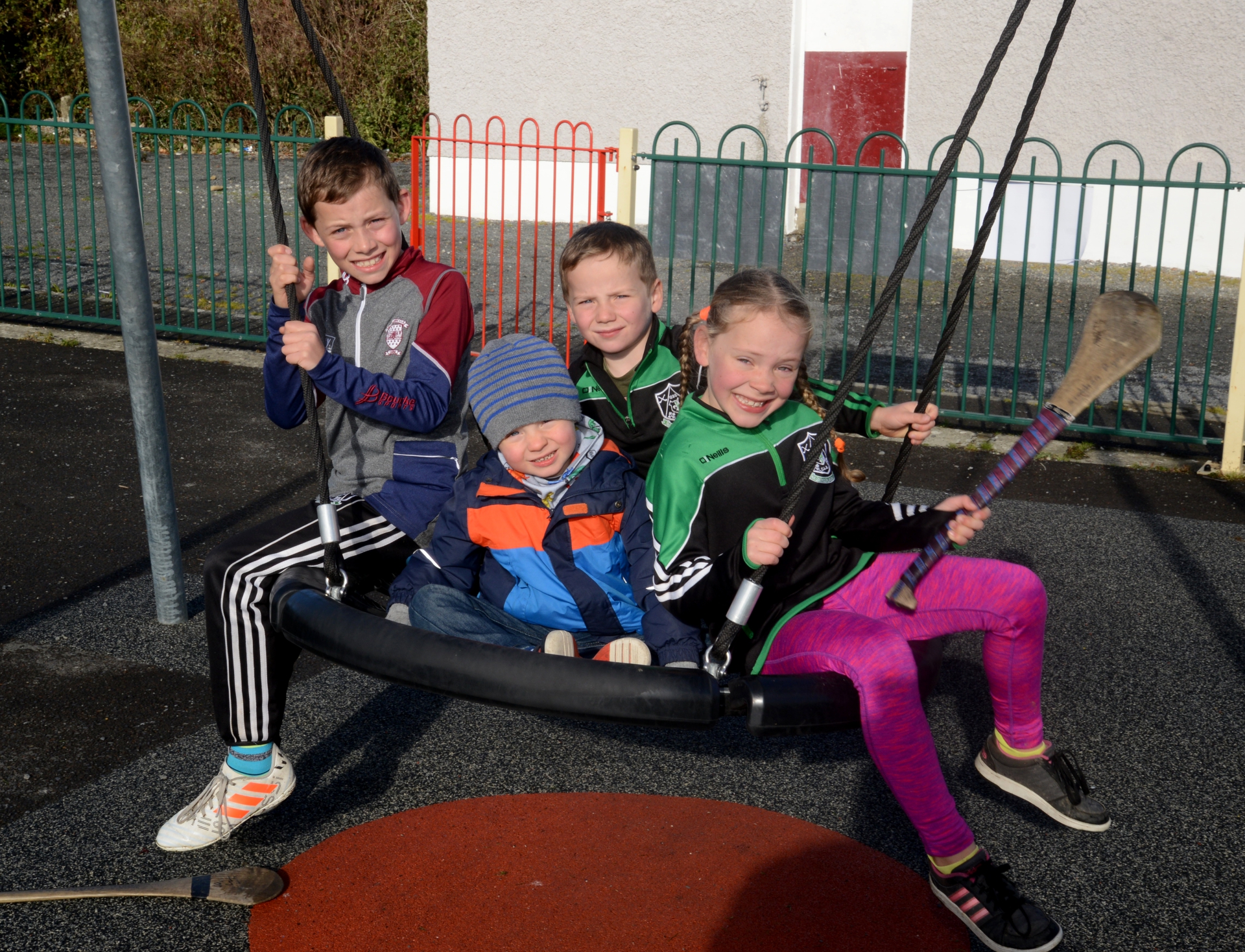 Another hugely successful initiative of recent years was the ingenious Borrisoleigh Track Attack. Since its inception in 2014 this fun fitness challenge has grown beyond the wildest beliefs of its founders Declan Maher and Pat Keane.

Their premise was simple, yet highly effective. To promote the use of a new running and walking track at Borris-Ileigh’s GAA field, an open invitation was extended to the entire parish to complete 3km, 4km or 6km routes every Monday night, earning points if they knocked a few seconds or even minutes off their timed loop.

The first Track Attack night brought some 39 participants to the GAA field, followed by 66 fitness fans to their second event.

By the end of the first season in 2014, the weekly meetings were attracting up to 100 people. By this October that number had more than doubled when close to 270 people were counted lacing up their runners every week.

“It’s safe to say the whole thing snowballed. We hoped for maybe 20 people on our first night but our main reasons for setting it up was to provide a safe space for people to walk in the winter,” explains Declan Maher.

“The whole concept certainly brought out a competitive streak in our fun leagues but the beauty of it was that it depended on how much you improved yourself. You couldn’t rely on your teammates, it came down to you,” offers Pat. 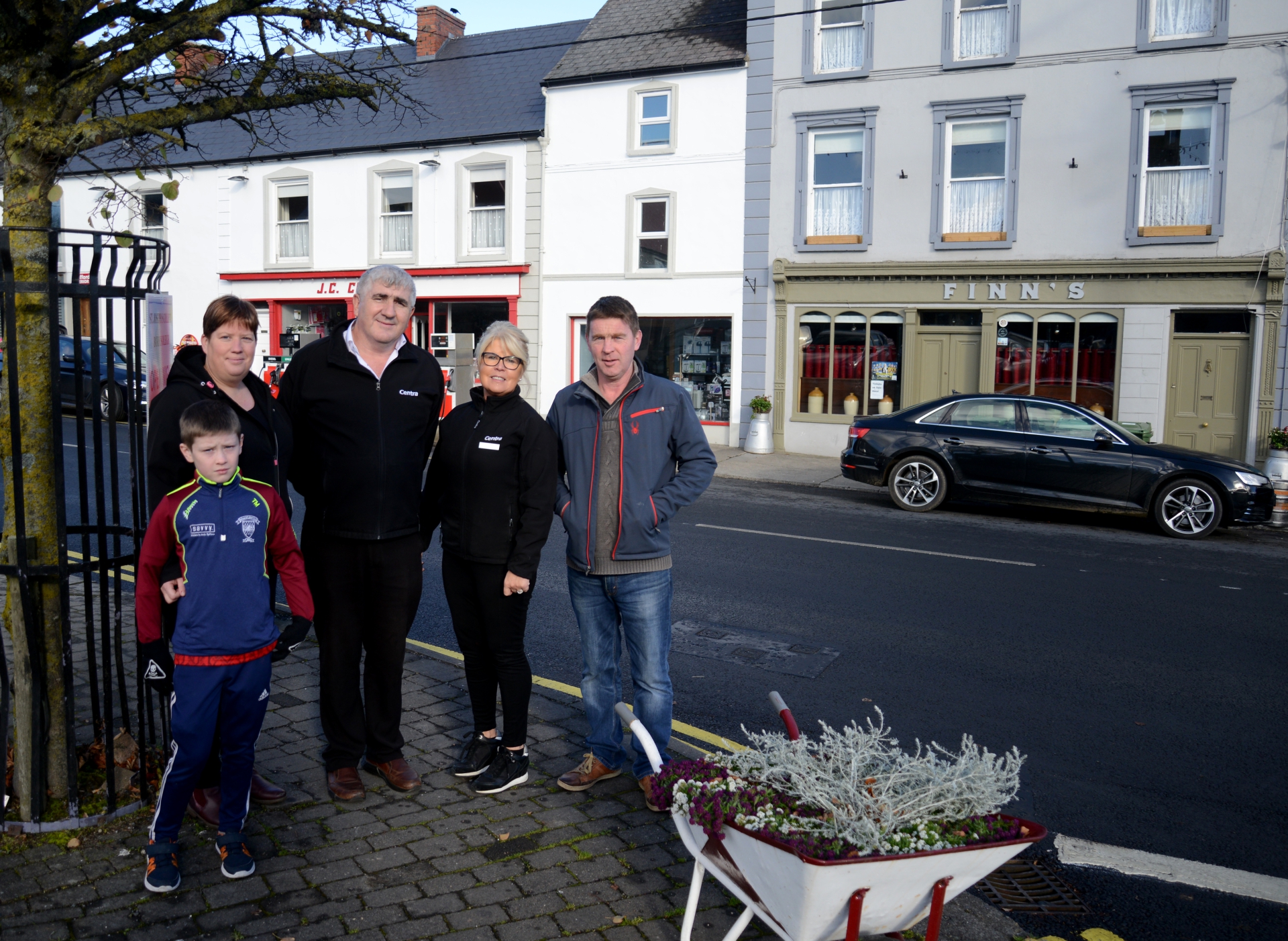 PICTURE: Fiona and Tomás Max, Seán and Marie Shanahan and Joe Loughnane of the Borrisoleigh Festival Committee, which has gone from strength to strength

The sheer success of the Track Attack alone has since helped pave the way for a host of community driven events and was also the turning point in helping revive the lost ‘Borrisoleigh Mile’ race that sadly faded in the 1960’s.

In July 2018, Track Attack members undertook their biggest challenge to date when they set on holding a “Presidential Run” relay challenge visiting the ancestral homes of three American presidents in aid of the Autistic Unit in Scoil Naomh Cualan and Teach Saoirse in Nenagh which provides respite care for families with disabled children.

The outcome was a resounding success, not only in organising the logistics involved to stage such an event which saw relay teams swim, cycle and jog the 500 km route within 49 hours, but also for bringing together every member of the community.

“We’re planning our next big event for the summer already. Some might say it’s even madder than the last one but we have to keep pushing it and seeing what we come up with,” he adds.

This can do attitude and willingness to get involved was replicated once again when the Stapleton family decided to hold a fundraiser for Amanda back in September.

While old sporting foes gladly donned their respective county colours for the game, the backroom team on the committee got to work organising marquees, lighting, parking and sound systems to help stage the event which is said to have brought the biggest ever crowd to Borrisoleigh on Saturday.

“It’s been overwhelming to say the least,” says Paddy Stapleton, who on the day I visit was busy making sure everything was in order at the GAA field ahead of the game.

“We wouldn’t have experience in putting on anything like this so it’s been a process figuring out what we need as we go but that’s where the local community groups and volunteers just jumped in and looked after things. For example we’ve had people come in and just take charge of stuff we never would have thought about.

“The support from everyone has given such a lift to the family and especially Amanda,” he adds.

PICTURE: The Tipp team that drew with Kilkenny at the All Ireland Legends game in Borrisoleigh

This small town, nestled at the foothills of the Devil’s Bit mountain, has always claimed a strong sense of community spirit and activism and it’s clear from speaking with anyone on the street that there is a real sense of pride among the locals who proudly call Borrisoleigh home.