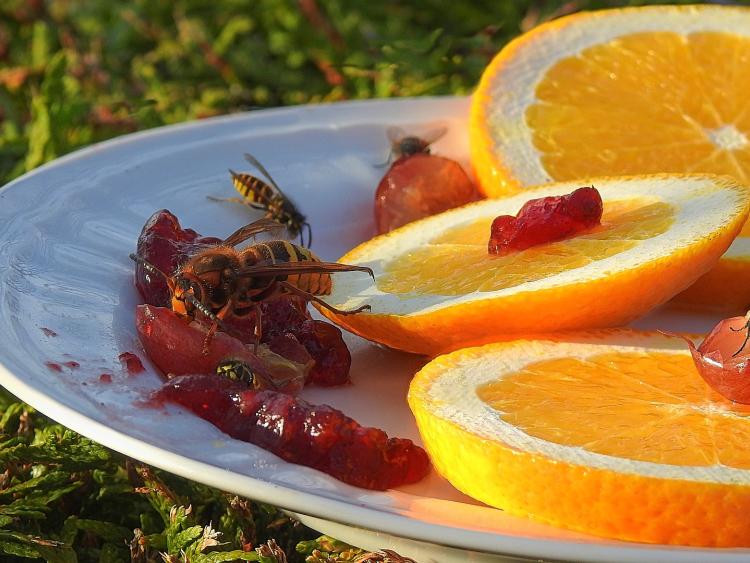 This time of year, colours seem so important and the human world seems populated by the ubiquitous blue and gold, blue and saffron, primrose and blue and of course the dreaded but universally respected, albeit grudgingly, black and amber. In the natural world at this time of the year colour is also important even in the basic matter of survival and just as successful G.A.A. managers have held the hallowed jerseys aloft in dressing rooms all over the country,so too the starkness of colours like black and orange send their respective messages to friend and foe alike.
Take for instance the insects and butterflies. The cinnabar moth has acquired the perfect recipe to avoid being eaten - they taste disgusting and their brightly striped black and amber jersey advertises the fact that they feed on a toxic plant, the buachallán buí and is therefore toxic itself. Many beetles, including ladybirds, also use chemical defence and many insects mimic poisonous insects in the same habitat and fly at the same time of the year. Another, more subtle line of defence is a type of camouflage to set up a decoy for a potential predator. Many butterflies, including meadow browns, so numerous in Cabragh, use false eyes on their wings to distract attention from the vital areas of their bodies. Experiments show that birds, their main predators, do actually attack the eyes and leave the main parts intact. If the eye is big enough, it can look fearsome as in the gigantic eyes of the peacock butterfly. The caterpillar of the elephant hawk moth has huge false eyes and a habit of rearing up impressively.
But of all the insects that elicit mixed feelings, surely the wasp is the greatest object of hatred in the insect world. Of course this hatred is wildly exaggerated. For much of the year, we scarcely notice them and they spend an idyllic life visiting flowers for nectar to keep them healthy. They collect aphids, caterpillars, etc with a single nest of wasps disposing of half a million insects in a year. The problem with wasps occurs in July or August and is caused by unemployment. Early in the year, the workers are feeding and looking after grubs that will eventually replace them. Around mid-summer they are taken up with bringing up queens to be strong and robust and to leave the nest and mate. They will eventually form next year’s colony. When the last queen departs in late summer, the workers find they have nothing else to do and the old queen’s influence is waning. In early summer, she gives orders and her subjects obey without question. A substance on her body suppresses aggression and keeps the workforce busy and peaceful. But as this chemistry fades, life becomes a free for all and they begin to fight. Riots may occur with many casualties. They head for human barbecues and picnics and solitary wasps attack caterpillars and flies, paralysing them and carting them off to their nests to feed their young when they hatch. The wasp carefully hides its paralyzed prey while it digs a nesting burrow in the soil with its legs and jaws. Its long legs are equipped with stout bristles which help with raking in earth. When the burrow is complete the wasp hauls its prey such as a spider into it. Then the wasp lays a single egg in it and covers it up and repeats the whole procedure about ten times. The egg hatches in two to three weeks and the larval wasp feeds on the prey which in many cases is still living but in a state of helpless paralysis. Having fed on the meal provided, the larva over winters and emerges as an adult the following spring. All this helps the gardener as many of the insects are those the gardener loves to hate. However, it doesn’t take the sting out of it for humans who more often than not will remember the wasp for all the wrong reasons. Incidentally the paper nest of wasps is an amazing construction and if you ever come across one we would love to have it in Cabragh to show the children.
The wonderful world of butterflies, insects etc. will feature in our annual summer camp this year at Cabragh Wetlands Centre from August 12 to August 16 from 9:30am to 1:00pm daily. Details from Cabragh Wetlands at 0504 43879 or Maura at 085 7748177. The week also features aspects of mindfulness, yoga, etc. There is hardly a better place in Ireland for a summer camp of this nature.
Slán go fóill.