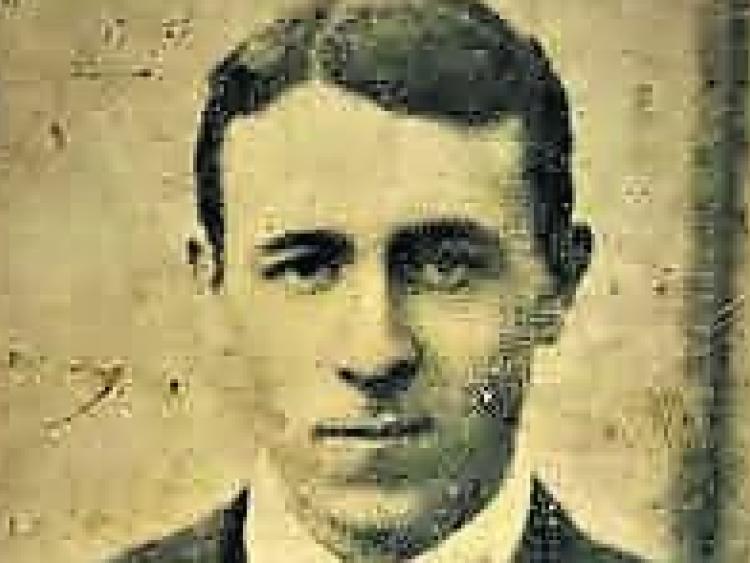 The group of about 20 men were under the command of Dinny Lacey, pictured, when they engaged with a lorry load of British soldiers at Thomastown on the morning of October 28, 1920

On the morning of October 28, 1920, a military lorry carrying about twenty soldiers of the Northamptonshire Regiment set out from their base at Richmond Barracks at Templemore.

Their intended destination was the army’s rifle range at Ballyglass, situated on the Aherlow road out of Tipperary Town.

However, the journey ended in Tipperary Town for eight of those on board, where the dead bodies of three of their number were unloaded at the military barracks, along with five others who were wounded and taken into the military hospital. This was one of the first of this type of ambush by the IRA’s newly created Active Service Units.

As the month of October 1920 was in its last few days the conflict, that in time would become commonly referred to as the War of Independence, was about to enter its bloodiest phase. Already in October, west Tipperary had experienced or been touched by more than its share of violence.

The killing of Sean Treacy on Dublin’s Talbot St on October 14, 1920 was a major event, as was his funeral to Kilfeakle.

It was followed five days later by the brutal killing of the Dwyer brothers, Ned and Frank who were dragged out of their home at Ballydavid in the Glen of Aherlow and shot dead by policemen. The death of the Lord Mayor of Cork, Terence McSwiney in Brixton prison after a 74 hunger-strike, and the looming execution of 18 year old Dublin student Kevin Barry raised international awareness of the conflict in Ireland.

At home, emotions were running very high and the escalation would lead to a spate of IRA attacks on police and other Crown Forces, and the inevitable retaliations that ensued, guaranteeing the downward spiral to chaos and mayhem.

October 1920 was also the month that heralded the formation and deployment of IRA Active Service Units, more popularly known as ‘Flying Columns’. These units were drawn from the various IRA battalions and consisted mostly of young IRA men who were already ‘on the run’ and could commit full-time to guerrilla activity.

The strategy was to bring together the IRA’s very scarce military weapons and mount quick sharp attacks on police or military patrols and installations, inflict whatever damage was possible and then withdraw to safety, using the terrain with which they were familiar and relying on the support of the population to feed and keep them.

The IRA’s 3rd (South) Tipperary Brigade Number 1 Flying Column was amongst the first of such units to step into action.

The group of about 20 men were under the command of Dinny Lacey, when they engaged with a lorry load of British soldiers at Thomastown on the morning of October 28, 1920.

The ambush party, led by Lacey, consisted of three separate units that came together to mount the attack. Along with Lacey’s Column, a group from the IRA’s Third battalion under the command of Ned O’Reilly, together with a group of active volunteers from the Hollyford company was also present.

According to IRA witness statements, the intended target was a police patrol that passed regularly between Golden and Tipperary Town and the attack was conceived, in part at least, as a retaliation for the death of their comrade Sean Treacy in Dublin two weeks earlier.

The ambush party were in the process of setting up their positions on the Cashel –Tipperary road, just west of Thomastown where the walls of the Castle estate and the quarry adjoining the road provided a suitable site for an attack, when the lorry transporting the military came into view.

The horse’s cart that was hastily drawn across the road to act as a roadblock warned the approaching military of some danger ahead. Instead of attempting to drive through the ambush position, the lorry came to a halt and the soldiers dismounted and took what cover they could before they had reached the IRA positions.

The IRA men, now in a somewhat less than ideal situation and without the element of surprise, manouvered into positions closer to the military and opened fire. The ensuing gun battle continued for about forty-five minutes, but the IRA could not force the troops to surrender and thereby capture their weapons and precious ammunition.

Despite suffering a number of casualties on the road, IRA accounts credit the young officer in charge of the military with preventing their surrender. On hearing the sound of a lorry approaching from the Kilfeakle direction, the attack was called off and the IRA men who had been behind the walls of the Thomastown Castle estate re-crossed the main and retreated across the fields to the north.

One IRA volunteer, Michael Fitzpatrick, received a bullet wound to his hip, but his colleagues succeeded in getting him away from the scene with local assistance. Lacey’s Flying Column, famed after in song and story, had succeeded, with the aid of Ned O’Reilly’s unit and the men from Hollyford, in their first engagement with Crown Forces.

About mid-day on the 28th, an army ambulance which had been dispatched to the scene of the ambush returned with its sorry cargo and headed to the hospital in the military barracks at Tipperary. Along with five wounded soldiers were the bodies of the slain soldiers, Privates Frank Shortt and Thomas Crummey and also the mortally wounded Lance Corporal William Hobbs.

Seeing their colleagues, and the death and mutilation in their presence, one can only surmise as to the mood that would have prevailed among the soldiers in Tipperary military barracks on that afternoon and evening of the 28th. Certainly, in the town that lay outside the perimeter wall of the barracks the mood would have been one of fear and foreboding.

In Templemore town, some forty miles distant, they had good reason to fear what would happen. Soldiers had inflicted major damage in the town after a previous IRA attack had killed RIC District Inspector Wilson on August 16, 1920. IRA outrage, followed by Crown Forces reprisal, had by now become the predictable pattern of the conflict.

On the Saturday evening of October 30, both Tipperary and Templemore towns were subjected to a reign of terror in which shops and pubs were looted, windows broken and citizens searched and beaten. The damage to property in Tipperary Town was extensive and only came to an end when Col. Wilson of the army and the local RIC DI George Gallogley succeeded in their orders to all troops to return to barracks. The story in Templemore was no different.

Here, ironically enough, the damage inflicted would have been much worse but for the intervention of the local police, including the much maligned ‘Black and Tans’ who succeeded in controlling the rampaging military and returning them to barracks. As a local woman, Mrs Brennan, speaking with a newspaper reporter remarked, “you could not but admire their pluck”. 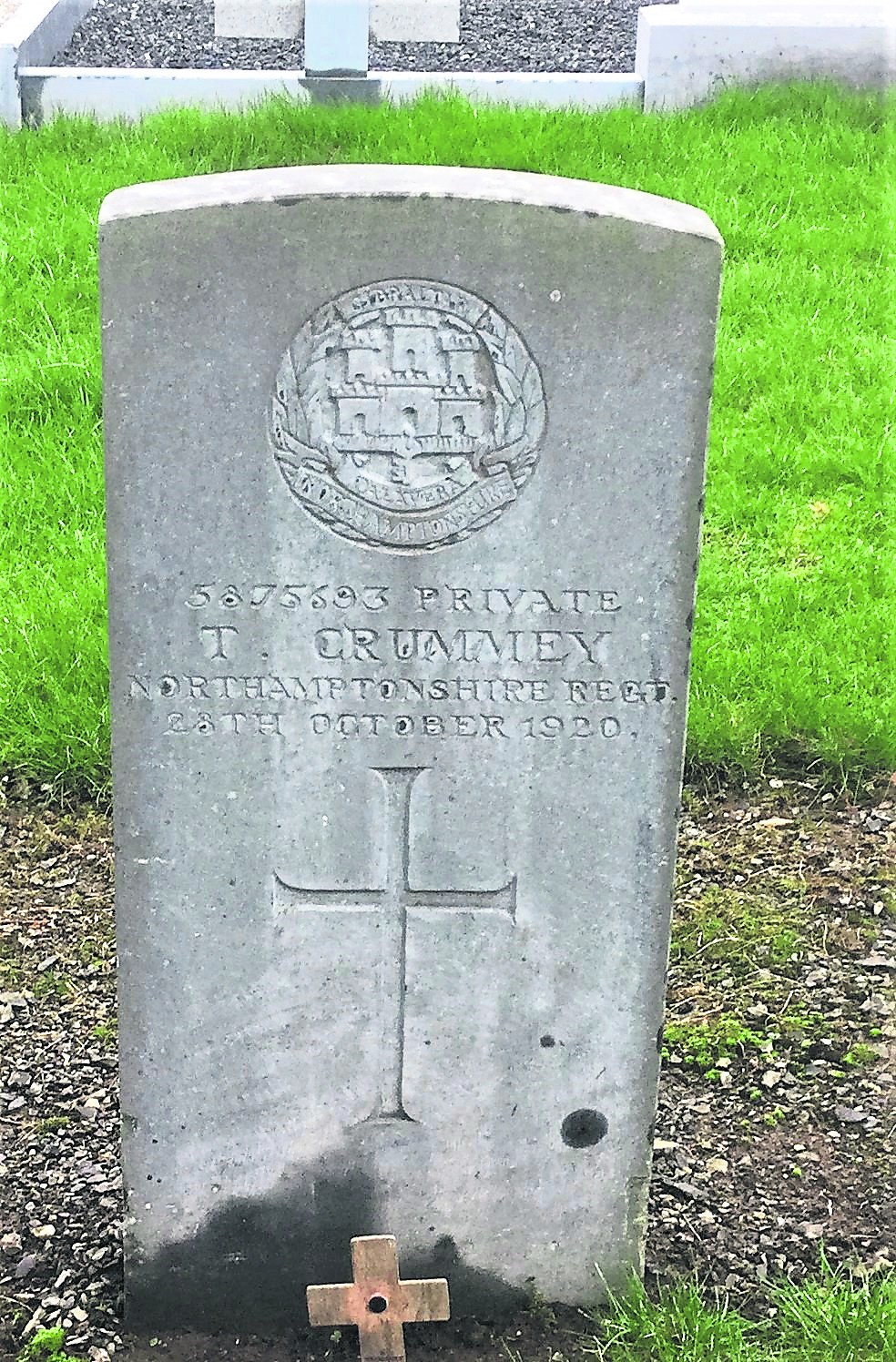 The remains of two of the dead soldiers, Lance Corporal William Hobbs and Private Frank Shortt, were removed to Limerick Junction and ultimately transported to England for burial. However, on Monday November 1, Private Thomas Crummey was laid to rest in St Michael’s cemetery, Tipperary.

The press reports at the time state that he was buried with military honours and that prayers at the graveside were recited by the town’s Parish Priest, Monsignor Ryan and his curate Rev. S Ryan.

At Thurles Quarter Sessions of June 1921, a number of compensation claims were processed arising out of the ambush at Thomastown. The driver of the lorry, Private Charles Murison was awarded £3,200 in compensation for injuries he sustained. Likewise, Lance Corporal William Needle was awarded compensation in the sum of £1,000.

In comparison, the family of Lance Corporal William Hobbs was awarded the paltry sum of £450 for the loss of their son’s life. The newspaper reports contain no reference to any claim for compensation from the family of Private Thomas Crummey and a look at his background might reveal the reason why.

Thomas Crummey is recorded as being born in Newport, Co Tipperary in 1903 to Kate Crummey. The 1911 census sees Thomas as an inmate of the Nenagh workhouse, along with his mother Kate and a sister, Mary Anne, four years his junior. Although not featured in the census of 1911, another daughter, Margaret was born to Kate in 1907 at the workhouse hospital. The census of 1901 shows the Crummeys living in Newport town.

The slain solder’s grandfather, also Thomas, is registered as a “pedlar” and in other contemporary records of the time, he is referred to as a “dealer” and being a native of Belfast or on some records, Newry. Between his entry in the census of 1911 in Nenagh Workhouse and the Thomastown ambush of October 1920, no information can be found on the life of Thomas Crummey.

The only thing that we can say about the seventeen year old soldier with any degree of certainty is that coming from the workhouse in Nenagh and born to an unmarried mother, life would have not been easy for Thomas Crummey. Indeed everything would have been stacked against him. Perhaps, we can also surmise that it was not out of any sense of love for King or empire that Crummey joined the British Army.

The motivation for moving from one institution (the Workhouse) to another (the army barracks) was most likely to provide himself with a bed to lie in, three meals a day and to keep himself out of the poverty which was the lot of people like him. A commonwealth headstone marks his resting place in St Michael’s cemetery Tipperary, the only memorial to the name of Private Thomas Crummey.

The only other reference to his life and death is to be found in some of the Bureau of Military History statements on the Thomastown Ambush.

“The enemy suffered three fatal casualties”, “we killed three of the enemy” or phrases of a similar tenor, is how the unfortunate Crummey and his colleagues are referred to.

Lacey’s Flying Column were soon in action against the Crown Forces. In just two weeks, on November 13 they struck at Lisnagaul, near Bansha, in the Glen of Aherlow.

In this ambush, they inflicted four fatal casualties on an RIC group who were delivering pay to police barracks around west Tipperary.

The predictable retaliation which followed led to wholesale destruction again in Tipperary Town.

Despite attempts in the background to broker peace, the violence was to continue unabated for another eight months until a Truce was eventually agreed for July 11, 1921.