Albert Nolan: Exploring the wild side of Tipperary town 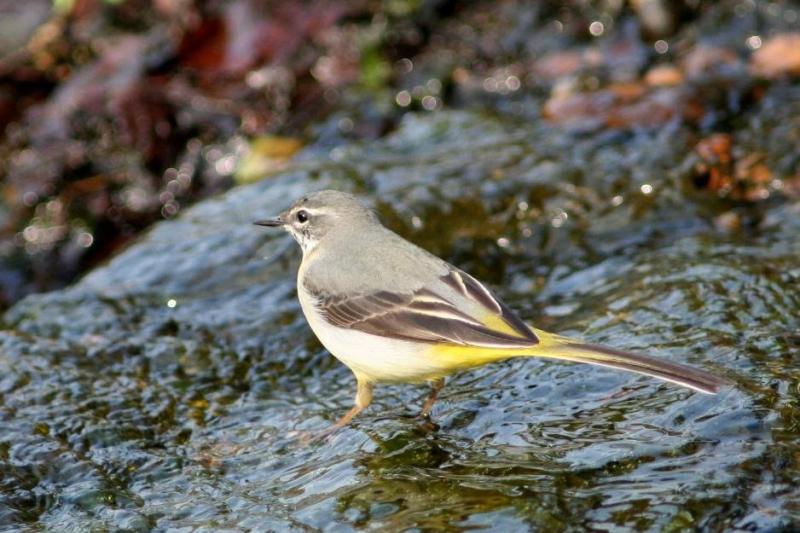 Spring is really advancing in the town as birds, plants and insects prepare for the most important season of their year. Their lives are lived right alongside us and rival any documentary on TV. I was also keen to see how wildlife has adapted to urban living in corners of buildings and streets.

I paused at the River Ara Bridge near the creamery and watched a pair of Grey wagtails perched on the large stone in the middle of the River.

Their name is misleading as they are brightly coloured birds and have a lot of yellow on their body and wings. Every so the male would fly up and with a flick of his tail grab an insect. He returned to the stone and presented his catch to his mate who gratefully accepted his gift.

Among the unused headstones at Kelly’s memorial works a mini woodland has developed. Sycamore whose catkins are good for bees, bramble supports butterflies, caterpillars and insects and ivy for shelter, flowers and berries.

An ash tree has grown to 10 meters high and will become the dominant tree if left and protected. The pollen filled catkins were out on the branches of the willow.

These are packed full of food for pollinators and I have also seen birds like house sparrows sipping the energy rich nectar.

These mini habitats are a very important habitat for nature and support wildlife in our town. Trees provide a safe resting spot for birds and also a perch when they can sing during the day. These are great areas to map and protect as part of an overall biodiversity plan.

A mature woodland edge borders the car park of the railway station. This consists of no native trees or shrubs but is still beneficial for wildlife. Many of the plants are evergreen proving shelter from the elements throughout the year.

Shrubs like cotoneaster, St John's Wort and Mahonia also produce flowers and berries that feed insects and birds. Loniceria has been trimmed into deep and high hedge and this will support the nests of wrens, dunnocks and robins. Behind the hedge there is a large open space and this would make place to sow trees or plant wildflowers.

I climbed the green bridge to listen to a male blackbird singing. He was perched in a tree along the railway line. I could clearly make him out and his song was loud to compete with the traffic and the noise from the creamery.

I turned onto the slip road and the disused parts of the yard are slowly developing into a woodland. Sycamore, elder and flowering currant are already high enough to provide plenty of perches for flocks of birds.

The willow trees were full of catkins and hungry house sparrows were pecking them open to get at the energy rich nectar.

Down on an abandoned metal railway a robin was caustically watching me. Robins can be early nesters and I think his nest was nearby. What we often see as overgrown is prime urban habitat for nature .

The entrance road to the housing estate is bordered by a mature hedgerow and a large field. This is an interesting habitat where the edge of the town meets the countryside. The main tree species is hawthorn and this supports dozens of species of moth caterpillars. These caterpillars are gathered up by birds like great tits in the spring and fed to their chicks.

There is a profusion of wildflowers from lord and ladies, ivy, cleavers, dandelion, bramble creeping buttercup, cow parsley, lesser celandine, bittercress, red dead nettle and groundsel. Our pollinators are in decline and the succession of wildflowers found along the base of a native hedgerow feeds bees throughout the spring, summer and early autumn.

I got a real surprise when three little egrets fly by. These birds are a brilliant white colour with a black beak and legs. They were heading for the River Ara on the Golden road.

Here the river is fast following but shallow and makes a good feeding ground for birds.

I followed the road and the hedgerow consisted mainly of ash. This is very unusual as most hedgerows are hawthorn and blackthorn. It might have been planted years ago by a long gone enterprising soul who wanted to grow them for hurley’s or perhaps they just liked nature.

In a mature garden I watched a beautiful male bullfinch disappearing into a garden hedge. A weeping willow was full of yellow catkins and I saw my first buff tailed bumblebee foraging for nectar and pollen. I was so engrossed I forgot I was looking into someone’s garden, till a curious face appeared at the window but after a few seconds gave me a friendly wave. Perhaps they are also bee lovers.

I left behind the quiet road and emerged on the busy road into town. A new block wall has been built along the path and it is completely barren of life. This is stark contrast to the old stone walls that are full of flowers, mosses, lichens and insects.

The one break in the desert was a field gate. Here a mini wildflower garden had developed.

Nettle, red clover, dandelion, cow parsley, groundsel and Meadow buttercup. All of these flowers provide food for insects that in turn are eaten by birds.

The gardens have plenty of colour. Cherry blossoms were in bloom and red berries on the cotoneaster. The first tulips were out, three yellow flowers in a tall pot. Alpines with pink flowers tumbled over a stone and these are excellent for bees. One gardener had created a woodland walk. Tall beech trees lined the path with a carpet of lesser celandine growing underneath.

By the entrance to Sean Tracey Park there is a fine stand of birch trees and the pink flowers of common fumitory were growing along the base of the tall wall. Even on the shortest of walks there is bountiful life waiting to be discovered.

Comments/ questions to albert.nolan@rocketmail.com or 089 4230502. Albert is also available to give walks/talks to schools, tidy towns, youth and community groups.