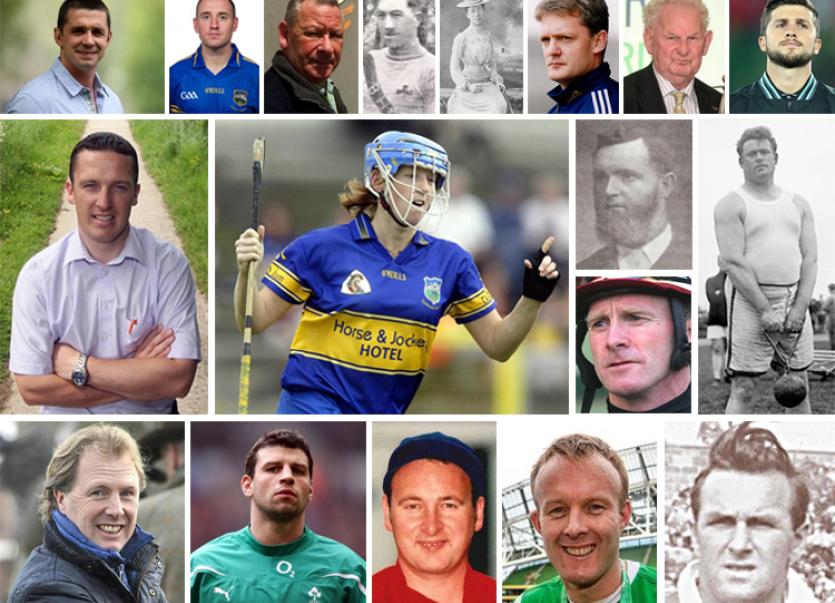 So, who will get your vote?

Here at the Star we are endeavouring to find out who the Tipperary public regard as the county's greatest-ever sportsperson. We have pulled together twenty nominations and now all we need you to do is give each of the following some considered thought before voting for who you think the winner should be.

Declan Browne is regarded as Tipperary's greatest-ever Gaelic footballer. With Moyle Rovers Declan has won seven county senior football titles and played in 25 championship games for Tipperary (1996-2007). Declan represented Ireland as part of the international rules series in 2003 and 2004 and inspired Tipperary to a Munster minor football title in 1995. In 2005 Declan captained Tipperary to win the Tommy Murphy Cup at Croke Park.

Carrick-on-Suir's Maurice Davin (1842-1927) was the co-founder of the Gaelic Athletic Association, the first President of the GAA and the only man to serve two terms as president of the association. Davin was also a supremely talented athlete who held numerous records during the 1870s for running, hurdling, jumping and weight-throwing. Indeed, Maurice Davin was once regarded as the finest athlete on the planet.

In an extraordinary career Jimmy Doyle won ten county senior hurling titles with Thurles Sarsfields. Jimmy played 39 times for Tipperary (1957-73) scoring 18-176 and winning nine Munster titles, six All-Irelands and seven National Leagues. Doyle also captained Tipperary to All-Ireland success in 1962 and 1965. In the colours of Munster Jimmy won eight Railway Cup medals and was named on the Hurling Team of the Century in 1984.

Holycross-Ballycahill's John Doyle is a legend of Tipperary hurling who played 54 times for his county between 1948 and 1967. Indeed, during a glittering inter-county career John Doyle won eight All-Ireland medals, ten Munster titles and ten National Leagues. John also won six Railway Cup medals with Munster and three county titles with Holycross-Ballycahill. In 1984 John Doyle was named on the Hurling Team of the Century.

Lattin-Cullen's Nicky English won five Fitzgibbon Cups with UCC and played 35 times for Tipperary (1982-96) winning five Munster titles, two All-Irelands and six All Stars. English was a thrilling forward who was often referred to as “God” by supporters and scored 20-177 during his inter-county career. Then, as manager of the Tipperary senior hurling team, Nicky guided the Premier County to All-Ireland, Munster and National League success.

Deirdre Hughes is regarded as Tipperary's greatest-ever Camogie player. Indeed, the Toomevara woman was selected on the team of the century in 2004 and helped Tipp to win All-Ireland titles in 1999, 2000, 2001, 2003 and 2004. Deirdre won an All-Ireland junior title in 1991 and also inspired Tipp to intermediate All-Ireland success in 1997. Finally, Hughes reached the promised land two years later when Tipp won the O'Duffy Cup in '99.

Mullinahone's Eoin Kelly won five Munster titles, two All-Ireland titles, two National Leagues and six All Stars during a glittering inter-county hurling career (2000-14) He made 63 championship appearances for Tipperary and scored 21-368. Eoin won a Croke Cup with St Kieran's College, Kilkenny in 2000, captained the Limerick Institute of Technology to a Fitzgibbon Cup in 2005 and inspired Mullinahone to a county title in 2002.

Tom Kiely was an extraordinary athlete from Ballyneale who competed in 1904 Olympic games in the all-round event (100-yard dash, shot putt, high jump, 880-yard walk, hammer throw, pole vault, 120-yard hurdles, weight throw, long jump and one-mile run) in which he won the gold medal. Although approached by both the British and American teams Kiely fund-raised himself and competed at the games under the Irish flag.

Johnny Leahy was born in 1890, made his debut for the Tipperary hurling team in 1914 and won two All-Irelands and five Munster championships in the blue and gold - Leahy captained the Tipp team to the All-Ireland title in 1916 and 1925. At club level Johnny won nine county titles with Boherlahan-Dualla. Following his playing career Leahy involved himself in the coaching of hurling before becoming chairman and secretary of the County Board.

Denis Leamy played 145 times for Munster (2002-12) and 57 times for Ireland (2004-11). The back-row forward launched his rugby-playing career at Cashel RFC alongside brothers Ed and Kevin before featuring for Rockwell College. He won his first Munster cap at the age of 19 before collecting the Heineken Cup in 2006 and 2008. Denis was named captain of the Munster team for the 2010-11 season. Leamy retired in 2012 due to a hip injury.

Gortnahoe's Shane Long made his debut for the Republic of Ireland in 2007 and has, since then, won 71 international caps for his country. Long started his soccer career with Borris-St Kevin's before signing for St Michael's. Next came moves to Cork City, Reading, West Bromich Albion, Hull City and Southampton. Indeed, Shane Long featured for Southamption in their recent EFC Cup final clash with Manchester United at Wembley, London.

A native of Cloneen Frank Meagher was a rally driver of international renown. He first came to prominence on the motor sport scene during the 1980s. Frank won the Circuit of Ireland Rally Championship in 1992 and the Tarmac Championship in 1995 while he claimed the Tipperary Stonethrowers Rally a record nine times. On March 10th 2002 Frank was testing his Sierra Cosworth near Slievenamon when he crashed and tragically lost his life.

Seán Naughton is regarded as the “father of athletics” in Tipperary - the Nenagh Olympic AC stalwart has made a staggering contribution to Irish athletics for more than fifty years. In his athletic prime Seán reach the Olympic qualifying standard for the 100 yards on grass in 1956 and would go on to dedicate himself utterly to the coaching and administration of athletics in Ireland. He was also a founding member of Nenagh Olympic AC.

Alan Quinlan played 212 competitive games for Munster (1996-2011) and on 27 occasions for Ireland. The former Abbey CBS student and Clanwilliam FC blindside flanker won Heineken Cups in 2006 and 2008 with Munster. Indeed, Alan Quinlan collected the man of the match award when Munster beat Toulouse 16-13 in the 2008 Heineken Cup final. Quinlan was a member of the Irish world cup squads in both 2003 and 2007.

Helena Rice, more commonly known as "Lena", was born in Marlhill (near New Inn) in 1866 and won the ladies singles title at Wimbledon in 1890 (the only Irish female player to ever win a singles title at Wimbledon). In her Wimbledon singles final Lena Rice beat May Jacks when winning 6-4, 6-1. Rice died of tuberculosis in 1907 and is buried at the New Inn cemetery. Lena was a member of Cahir Lawn Tennis club.

Thurles' Paddy Ryan (1851-1900) was a boxer who won the world heavyweight title on May 30th 1880 when he beat Joe Goss - Paddy retained the title for two years before surrendering his belt to John L Sullivan in 1882. In New York Paddy Ryan was nick-named the 'Trojan Giant'. Paddy launched his heavyweight career in 1877 and ultimately beat Joe Goss three years later after a grueling 87-round battle which lasted 90 minutes.

Charlie Swan was crowned Irish National Hunt champion jockey for nine consecutive years and is now a trainer based in Cloughjordan. Charlie, of course, is best remembered for the partnership he struck up with the wonderful Istabraq, on whom he won three Champion Hurdles at Cheltenham. Swan holds the Irish record for the most winners in a season (147 in 1995-96) and the most in a calendar year.

Cashel's James ‘Chalky’ Walsh is player-manager with St Michael's FC and is the Republic of Ireland’s most capped junior international (won 80 caps over 12 years). Walsh, of course, has won numerous titles with St Michael's including the FAI Junior Cup in 2014 having previously lost four finals of the prestigious competition. St Michael's are the defending Munster Junior Cup and Tipperary South & District League Premier Division champions.