Templetuohy coursing was a great success 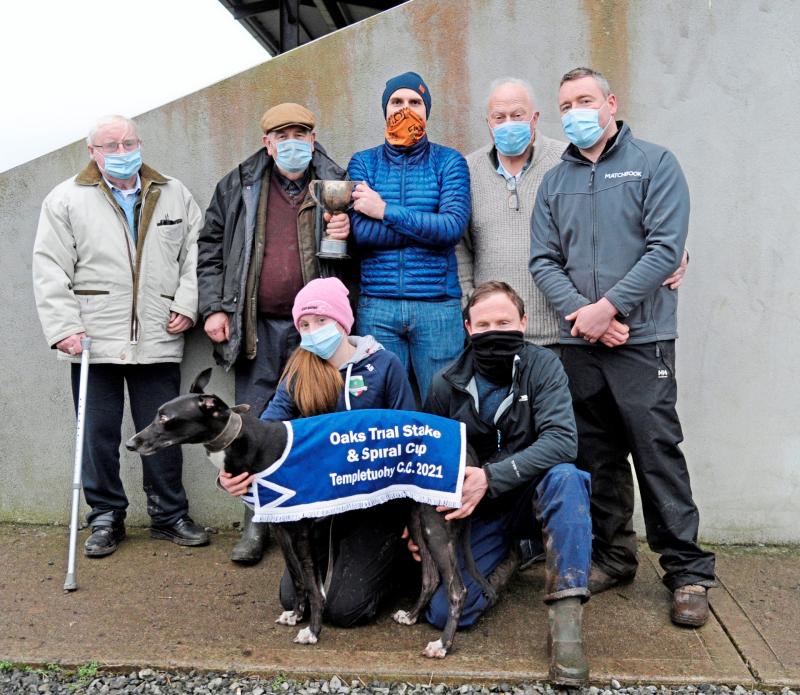 There was a tremendous crowd in attendance for the three days of Templetouhy’s outstanding 3 day Coursing meeting which concluded last Sunday.

Despite some testing weather conditions the Club saw perhaps their largest ever attendance at their well-appointed Longorchard Grounds for what was the 50TH running of the Premier Cup Meeting.

Templetuohy Coursing club was established in 1928 and has a long and proud tradition in the local area and has always been deeply embedded in the life of the community especially over the winter months when the netting of hares comes into full swing and preparations kick off for the annual meeting. The establishment of the Premier Cup in 1971 as a 32 runner, nominator event for All-Aged greyhounds as the feature event of the meeting was a notable departure and the club has proudly maintained that tradition over the intervening 50 years.

Indeed, this year the Premier Cup was the only 32 runner All-Aged event to take place across the Club season and was also the most valuable with €4,000 going to the winner. Also on offer were 9 Champion Stakes qualification points to the winner which would almost certainly guarantee the winner entry into the elite 8 runner All-Aged event at the National Coursing Meeting in Powerstown Park in Clonmel at start of February. 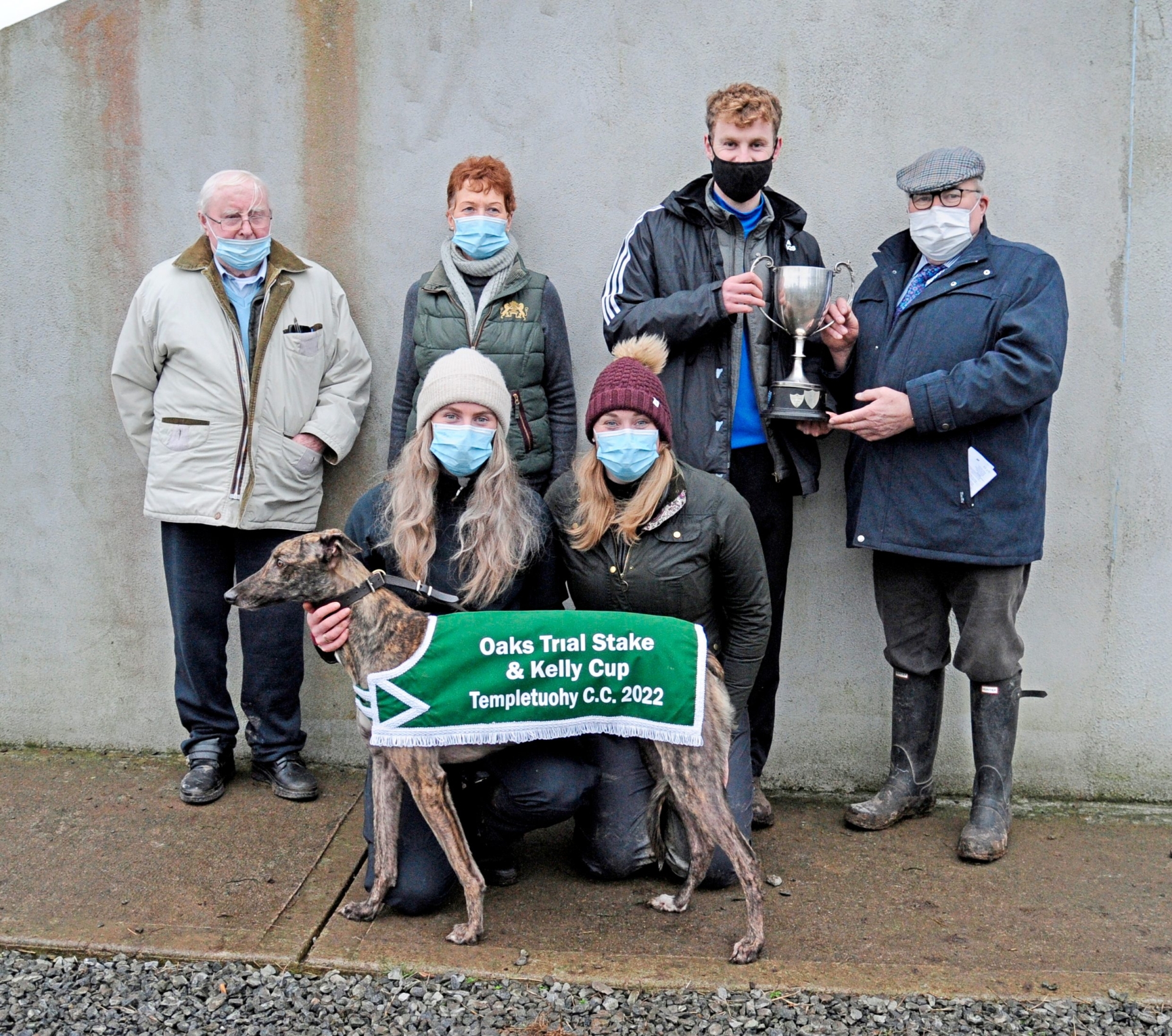 Needless to say, the attractive prize pot saw a very strong field assembled to claim this prestigious Cup and there were a lot of previous Cup and Trial Stake winners in the field on Friday morning. 20 dogs took their chance with 12 bitches making up the full complement of 32. The bitch’s section of the event incorporated the Templetuohy Champion Bitch Stake and Hennessy Cup and there was an additional €700 on offer for the last surviving bitch left in the Stake provided she wasn’t withdrawn.

In the event, the final pairing after some outstanding Coursing over Friday and concluding on Sunday saw Bexhill Flare, owned in Glin in Co. Limerick by John Barrett & Con Sheehan and trained in Newry in Co Down by the legendary Brendan Matthews represent the males and take on Shes Invincible in the final. Shes Invincible is owned by Portlaoise men Raymond Conroy and Ollie Dunne and is being trained in Athenry by Matt Harte. Many punters were surprised at the bitch taking her chance in the final as she’d had a bit of extra work in her semi final and shipped a heavy fall in her 3RD round victory over Breska Life. However, her connections are nothing if not sportsmen to their core and decided to take their chance against the dog in the final. 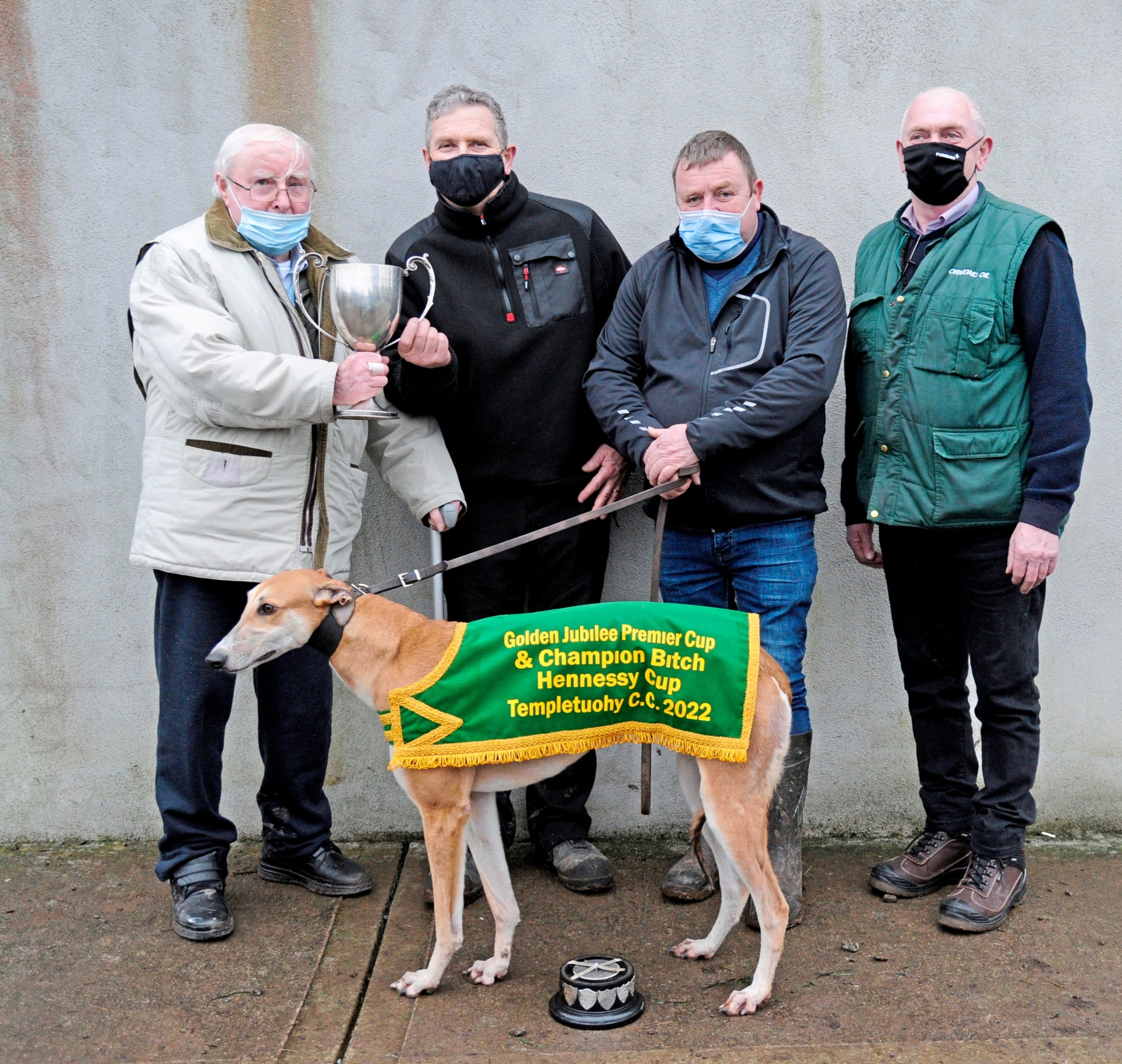 Proved too much
In the event however the handicap proved too much for the bitch and Bexhill Flare ran out the comfortable winner taking the laurels to go with the Desmond Cup he’d already annexed earlier in the season at the Glin meeting. The runner up having won a Trial Stake in New Ross earlier in the season is now in the enviable position of holding entries in two Classic events following her outstanding performance in reaching the final here given that she is now qualified for both the 2021 Oaks and the Champion Stakes. The winner was nominated by popular Working Member of the promoting Club Eamonn Kelly who is the groundsman for the beautifully appointed stretch in Longorchard whilst the runner up was nominated by Ann Maher of Thurles.

There were in total 4 Trial Stakes down for decision promoted by the Templetuohy Club at the meeting, a Derby and Oaks qualifier for last season’s Classics which weren’t held due to the pandemic and obviously 2 more qualifiers for this seasons Derby and Oaks. 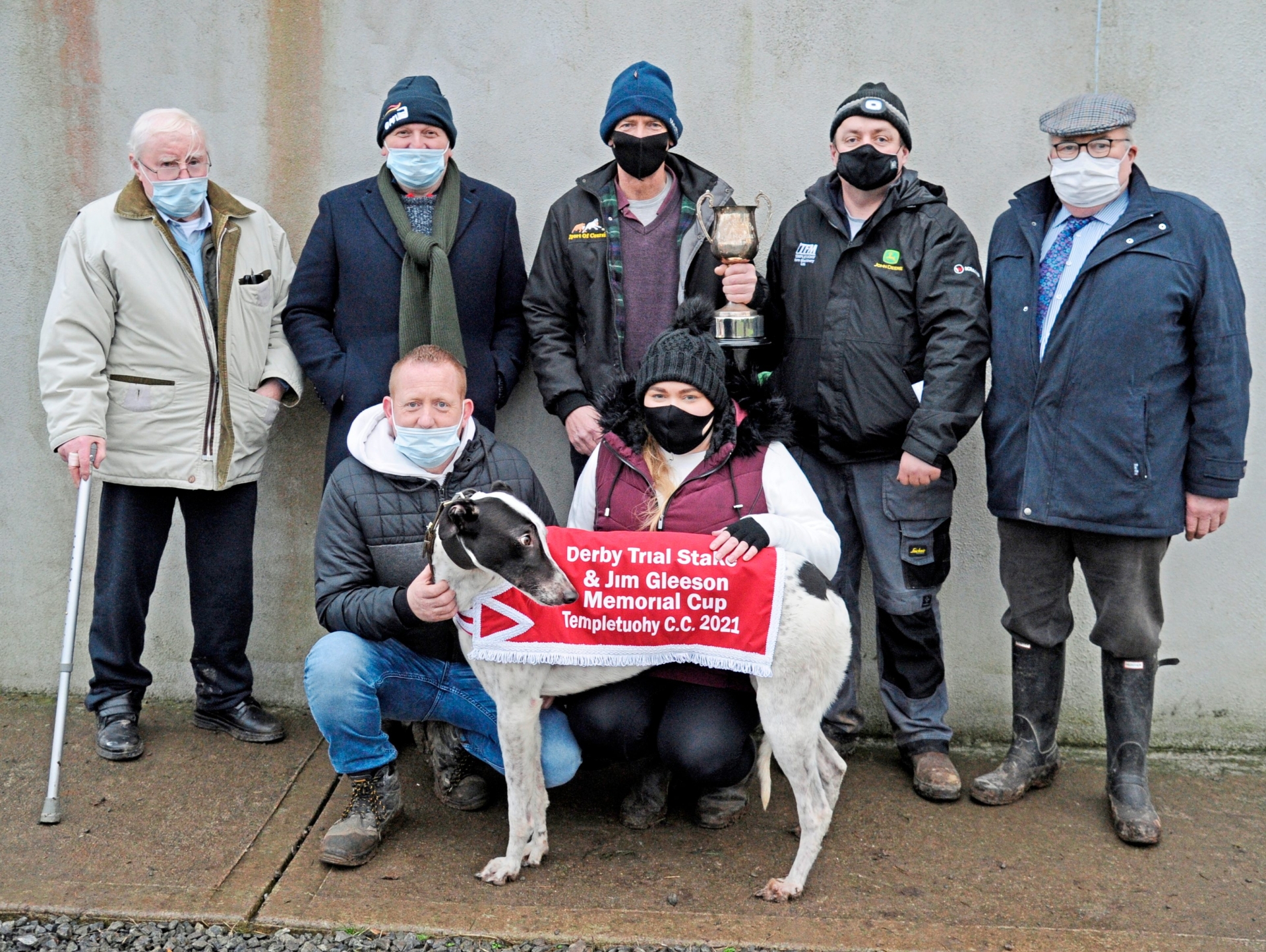 The Derby ticket for 2020/21 Derby went to the very impressive Icehouse King which Matt Harte of Athenry trains for Mrs Maura Collins and her husband Bobby. In the final he defeated the Newpark Stud Syndicate’s runner Rampant Star by 2 lengths. The Oaks Qualifier for bitches born in 2019 saw a double for Glin, Co.Limerick owners in the shape of Corbraighe Belle who is owned in that coursing mad enclave by Con and Kieran Fitzgerald and trained by Declan Byrne in Windgap in Co. Kilkenny. This lady is very well above average and will have a big chance in the Oaks in the final she proved 3 lengths too good for Cahir man William Lonergan’s bitch Tree Top Daisey by 3 lengths.

Moving to the Classic qualifiers for greyhounds born in 2020 there was a notable victory in the Derby Trial Stake for Missing Pounds. This fellow was most impressive throughout the Stake and was being handled by the very astute Michael O’Donovan in Tipperary Town for his owner the well-known UK based racehorse trainer Sir Mark Prescott. He had his closest call in the final when he was pushed all the way by Timeforachat which Seamus Bourke of Oola trains for his son James.

The Oaks ticket saw a very popular and convincing winner in the shape of Tactical who is owned jointly in Co Carlow by Damien O’Shea and his daughter Dayna and trained by the well-known former Judge Tom Lawler. Unfortunately, both Damien and Tom had to stay home from the coursing due to Covid, but the rest of the Lawler clan did a fine job to produce this very fast bitch to register a first ever Trial Stake winner for her popular owners. In the final she proved 6 lengths too good for the runner up Getupyoudaisy owned in Ennis by genial bookmaker Sean Doyle and his daughter Sarah Jane. 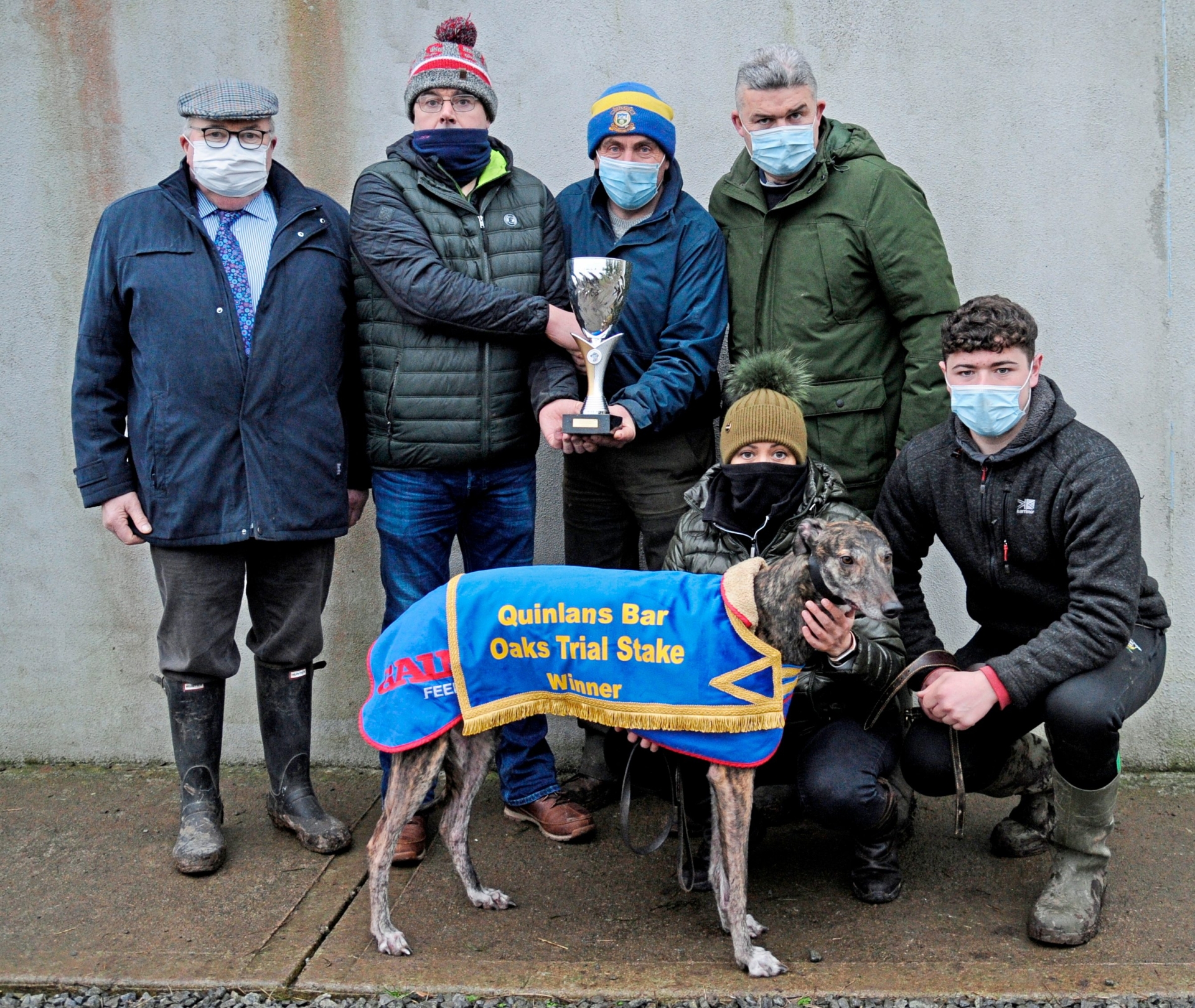 Local Stake
The all-important Local Stake confined to Working Members for the Everard Cup went the way of the H and L Syndicate when their Sendmeapicture was triumphant over Ma Teine in the final. The H and L syndicate comprises of members of the Healy and Leahy clans of Loughmore, long time supporters of the local club and is trained by syndicate member, young Dermot Leahy in Loughmore. The runner up is owned by Club working member Brian Kelly and his brother-in-law David Moloney and is trained in The Curragh by Brian’s uncle Seamus. 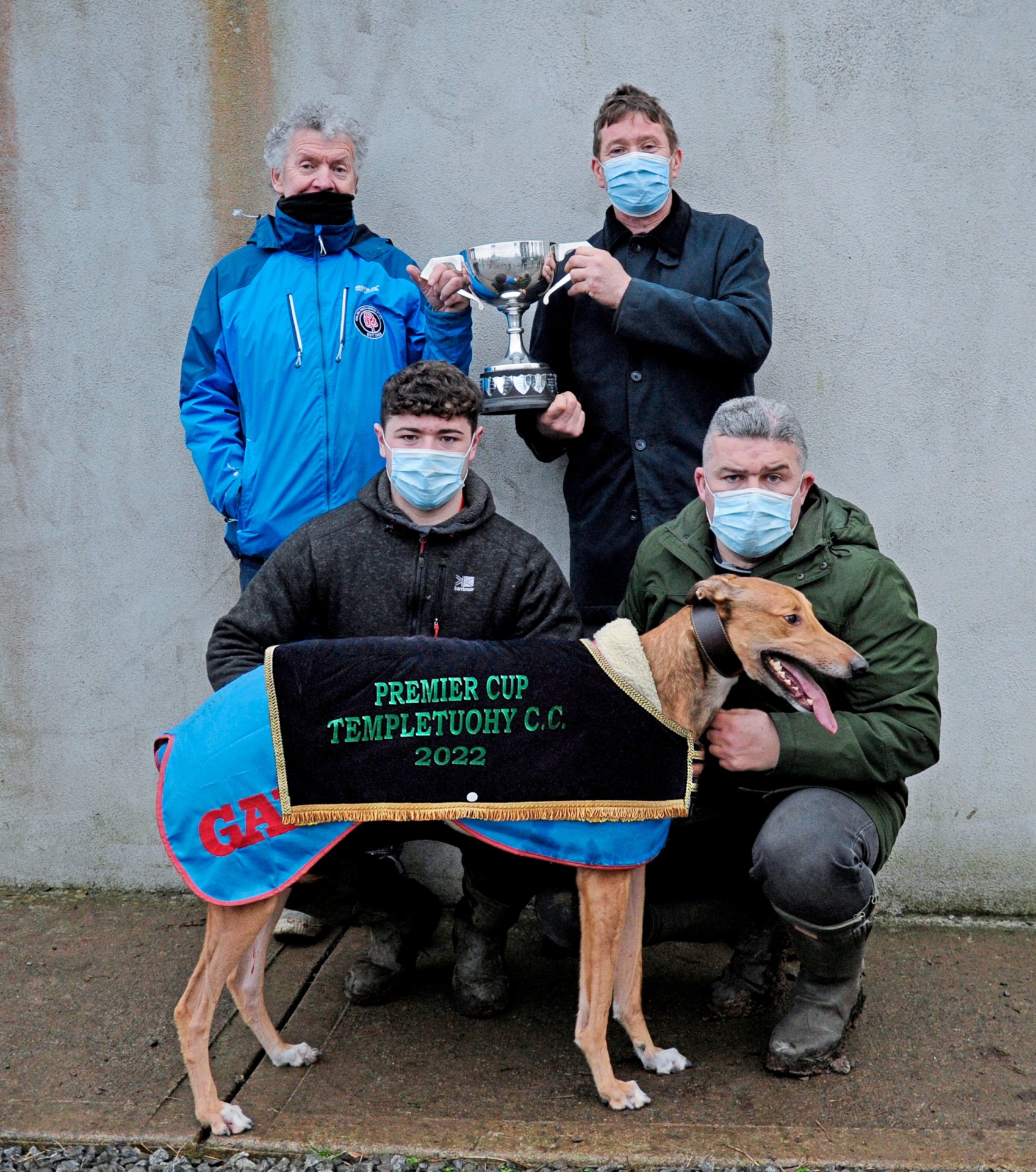 Tipperary and District Clun ran two Trial Stakes at the meeting for the 2021 Classics and victory in the Derby qualifier went to Hows Bobby which John Kelly of Nenagh trains for his nephews living in Toomevara Jamie and Darragh Meagher. The Oaks Trial Stake provided an across the card double for the Matthews kennels when Foxhollow Dame emerged victorious. This lady had to do it the hard way coming from behind to defeat In The Mood in the final by a very tight length at the top of the field. Dan Brassil trains the runner up for a Syndicate involving the promoting Club’s Chairman Mick O’Connell and others.

And so concluded a highly successful and really well supported meeting at Templetuohy. The promoting Club can certainly take a bow as the quality of coursing, the strength of the hares and the top-class facilities and running surface left nothing to be desired. Good hares will make for top class coursing is an old truism of the game and the stock assembles by Templetuohy were of the finest order and as a result it was a meeting to remember by all in attendance.