A dark cloud enshrouded the life of a popular Cahir man 15 months ago.

Tim Shanahan’s world came crashing down around him after being diagnosed with motor neurone disease (MND), a  progressive neurological condition that is weakening and wasting away the 58-year-old’s muscles.

Tim health has worsened in recent months, suffering choking neck pain that goes down his Adam’s apple and side neck agony that feels like a needle being rammed into him on a daily basis. The skin between his index finger and thumb on his left hand has wasted away. He has no strength in left forearm which makes everyday activities like washing, getting dressed and holding a cup of tea a nightmare. Tim gets tremendous back pain when sitting and walking his labrador Jack for anymore than 20 minutes leads to complete burn out. 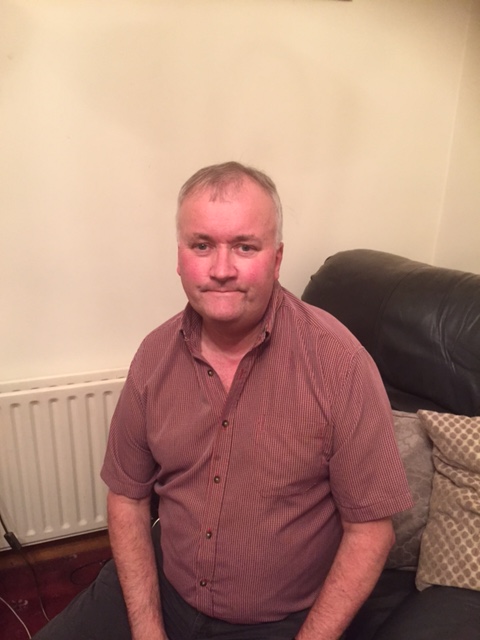 Tim studied business at Waterford Institute of Technology and later got a degree in management from Trinity College Dublin.

But Tim, a Rockwell College graduate who moved to Tipperary from Ballybofey in Co. Donegal 50 years ago, is determined to fight until the very end.

He is undergoing clinical trials in Beaumont Hospital in Dublin every two months to find a cause and a cure for MND. “I’m 46 weeks into a 56 week trial and have to take medication everyday.

“I’d rather be out doing something positive that gives me focus than sitting around moping the cards life has dealt me,” Tim tells The Nationalist.

MND forced Tim to retire from his managing role at a community childcare centre in Newcastle. Prior to that, he was general manager for Cahir Development Association for 19 years, responsible for identifying projects including childcare, enterprise and leisure centres for the town.

Tim has given up playing golf because he no longer has the strength to swing a club. He was president of Cahir Park Golf Club in 2014, chairman in 2015, and secretary last year until MND played havoc on his literacy. “I never thought for a second that I’d be the way I am today when I done the Ice Bucket Challenge as part of my president’s  prize back in 2014. It was all over Facebook at the time, but I still  hadn’t a clue what it was for,” Tim admits.

Tim, who has two grandchildren - Meadow (5) and Morgan (4) - can no longer play squash and all-weather football with his friends, but despite his heartache continues to hold a degree of positivity.

“I consider myself fortunate because 70% of people with MND die within three to five years, but my consultant neurologist Orla Hardiman believes I’m currently in the 30% bracket and hopefully I’ll stay there.

“I could walk out this door and get hit by a bus; you never know what’s around the corner. I want to die the way I am right now because the thought of me being in wheelchair and my wife Loretta looking after me kills me,” an emotional Tim highlights.

Tim has taken measures to combat the inevitable changes lying in wait.

“Breaking the news to my only daughter Nicole and mother Patricia was the hardest thing I’ve ever done. I also told friends because I was conscious of my slur and didn’t want them saying ‘Shanahan’s been out on the lash again’.

“We have built an extension to the house that is near completion. We felt the time was right to do it now, just in case I’m in a wheelchair in the future, and we got a grant off the local authority which was helpful.

“The support from the HSE and the Irish Motor Neurone Disease Association (IMNDA) has been unbelievable. Nurses come to the house and see if I need anything from crutches to cutlery or bed supports,” he underlines.

Tim is determined to give back to the IMNDA, with two local upcoming fundraisers in the pipeline. Music with The Cedartowns takes place at his beloved Cahir Park Golf Club at 8:15pm on May 13, with doors opening at 7:30pm. Admission is €15. A night of music with the best of local talent will also take place at Cahir House Hotel on July 14 at the same time. Admission is €10.

“I followed the late South African rugby player Joost Heystek van der Westhuizen’s life of two halves closely. It really hit home and has given me the drive to take positive steps in tackling MND.

“I’m not going to waste my time feeling sorry for myself. There is a huge need for funds to allow the Beaumont team to proceed with their research and studies. I want to make some contribution towards the money required, and hope that the local community come out and support the fundraisers to help us find a cure for MND.

“You never know who’s going to be diagnosed next with this killer disease,” he adds.