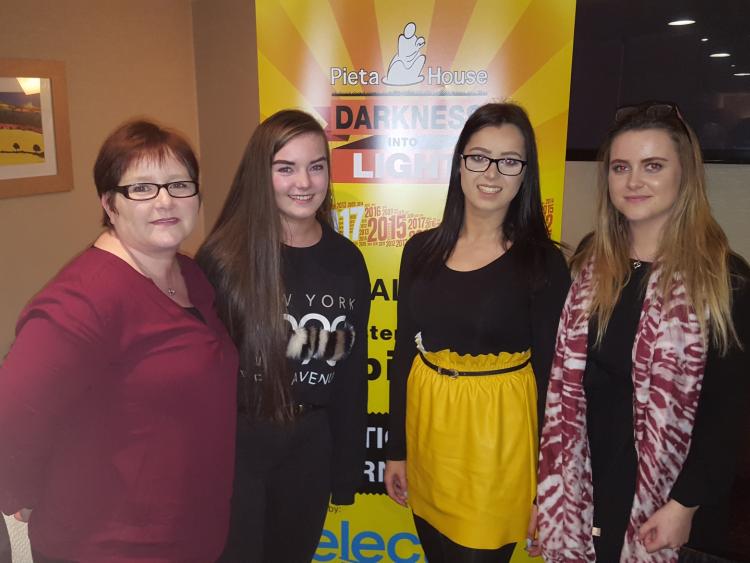 ‘We can win the wars against suicide and self-harm’ was the message delivered at the launch of Carrick-on-Suir, Dungarvan and Waterford city Darkness Into Light walks at the Tower Hotel in Waterford recently.

Darkness Into Light, which accounts for nearly 40 percent of Pieta House’s budget, takes place across the globe on Saturday 12th May at 04.15am.

Now in its 10th year, the flagship fundraiser has blossomed from humble beginnings into a global movement against suicide and self-harm. Darkness Into Light kick-started when Joan Freeman led approximately 400 people through the Phoenix Park in Dublin in 2009, and it now takes place in around 180 locations worldwide, including in Carrick-on-Suir, Cashel, Tipperary Town, Thurles, Nenagh and Roscrea.

“Suicide and self-harm are problems in Waterford and the South East and we need to face them together and that is what Pieta is all about,” explained Waterford city committee chairperson Des Purcell.

Des praised Joan Freeman’s vision and said the concept encapsulated what Pieta House is essentially about. “If I was in the room when she got the brainstorm that she was going to convince young people to get out of the feathers to walk at 04.15 in the morning, I have told her since half a dozen times that I would have thought she was off her head. Well, 120,000 proved that was nonsense out of me because that’s how many walked last year and that number will grow and grow and grow because it just touches a vein,” Des continued.

This is the first year that all walkers must register online. “Every other year up until now you could rock up at four in the morning, pay your money and away you went. The walk has become too big, there’s too much money involved and the regulations have tightened,” Des underlined.

Mayor of Waterford City and County Council, Cllr. Pat Nugent, said Darkness Into Light is a “phenomenal” fundraiser for Pieta House. He praised the volunteers who have helped the unique event go from strength to strength. “It’s a fantastic honour to be asked to launch the 2018 Darkness Into Light walks [for Carrick-on-Suir, Dungarvan and Waterford city]. It’s a very important awareness and fundraising event for Pieta House,” he told those in attendance, which included Carrick-on-Suir committee members Karen McGrath, Shauna Power, Hollie Hickey and Mary Power.

“Darkness Into Light is about hope and hope is something we endeavour to give each person who comes to us in their time of need. We help them feel more hopeful about the future as we continue to tackle the grave issues of suicide and self-harm in Ireland,” Mayor Nugent continued.

Mayor Nugent slammed social media for “taking too many people by storm”. He suggested that “people are living in a false place” and urged today’s generation to rediscover the art of conversation. “[People] are bringing their iPads and phones to bed with them and it’s affecting their sleep and their mind as well.

"A lot of problems would be sorted out if people can just spend more time talking to each other like the Ireland of old.

“If this generation is taken over by social media and other modern media and if they don't know the art of conversation, what will their children be like in 20 or 30 years time? And that’s why I think it's so so important to talk.

“A teacher told me that when some students come into school they actually show them how to hold a pencil or pen. When you go to that depth it’s tragic. All of us have to stand back and try to improve this wonderful country,” Mayor Nugent added.

Fundraising executive for Pieta House South East, Olive Ruane, said the walking and talking that happens at Darkness Into Light is invaluable. She praised the Carrick-on-Suir, Dungarvan and Waterford city committees, highlighting that the work of Pieta House could not go ahead without them. “The three committees here are closest to my heart. I am blown away by the volunteerism I see around me,” Olive commended.

Director of funding and advocacy for Pieta House, Kieran Brady, emphasised the importance of fighting suicide and self-harm. He said Pieta House has helped 30,000 ‘friends’ since its foundation, acknowledging the role of volunteers in bringing hope and support to those in need. “We are in a war on two fronts - a war against suicide and a war against self-harm. We are in a fight against stigma, we are in a fight against ignorance and we are in a fight when psychologically vulnerable minds are attacked and suggestions come into those minds that ‘you’re worth nothing and you’ll never get out of this problem. There is no hope. There is nowhere to go’.

"There is hope and it's people like yourselves who have helped Pieta deliver hope to 30,000 clients since we were founded [in 2006]. Pieta is actually all of you with us. We are not separate groups doing things to support Pieta House. You are Pieta House and what you do is critical to the therapy that saves lives,” Kieran reiterated.