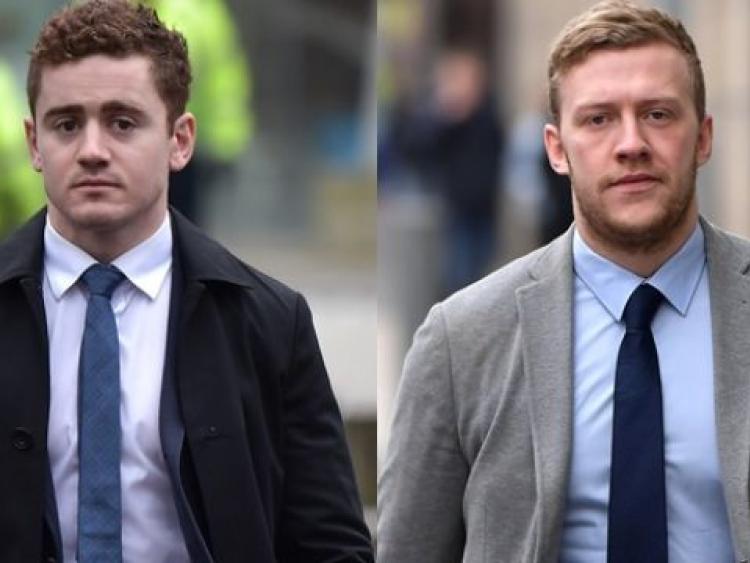 Former Munster and Ireland rugby star Quinlan said Jackson and Olding face a “tricky situation” if they wish to return to play rugby for Ulster and Ireland because of public reaction to the trial.

“The IRFU said they are going to have an internal review which is fully understandable - they have to react to what's happened. They have acknowledged the verdict being not guilty, but certainly the question will be asked ‘were they in breach of contract?’ ‘Did they bring the game into disrepute?’,” Quinlan said.

Quinlan believes the IRFU and Ulster Rugby have to be “very careful” about the decision they make on Jackson and Olding’s futures. “If it happened hypothetically that they didn’t allow the players return to work there could be some sort of recourse for the players against Ulster Rugby or the IRFU, so it’s a very grey area. There's a situation there where you’d imagine - in general for any sort of criminal trial - that if you are not found guilty you should be allowed go back to work, but this is different,” Quinlan continued.

Quinlan said the idea that sports people are role models will come into play before a decision is made about their futures. “The way the world is nowadays there is a lot more responsibility. There is a lot more attention on sports people when they are out and about. Role model has been mentioned a lot, [but] for me it’s about your behaviours - your behaviour has to be good. They have to be extra good at times because you get that extra attention when you are out and about. You get people coming up asking for autographs or photos, whatever the case may be, and people look up to you. You got to remove yourself from those situations if you find it difficult. Your behaviours - for males - with women got to be right. We have all been brought up to treat people right,” Quinlan said.

Quinlan said “there are no winners” from the Belfast rape trial and that there is “no grey area with consent”. He underlined: “[That message has to be passed onto kids]. It’s been an horrendous situation for both parties for a number of weeks and there is a responsibility for sports people [to act as role models].

“It may be worth reiterating for every establishment, sporting body and talking to their members about consent - particularly young people - and how we treat people.

“We got to try make sure that there is a high level of decency with anyone we treat and meet in the public. In all sports, when you are in an elevated position, there is going to be extra attention. But individually we must all remember our responsibilities around any sort of behaviour with people and that’s probably an important message - your behaviour shouldn’t change because you are in that elevated position. That’s really important going forward,” he added.

The IRFU and Ulster Rugby have noted the verdict handed down at Belfast Crown Court in relation to the case brought against Jackson and Olding. “We wish to acknowledge that this has undoubtedly been a difficult and extremely traumatic time for all involved,” a statement read.

“To respect the judicial proceedings, the IRFU and Ulster Rugby postponed any internal review of the matter with the players, until the proceedings concluded.

“IRFU and Ulster Rugby officials will review the matter, in line with existing procedures for all contracted players. A Review Committee, made up of senior representatives of the IRFU and Ulster Rugby, has been appointed and will conclude its review as soon as practicable.

“The players will continue to be relieved of all duties while the Review Committee is in process and determining its findings,” the statement concluded.