WE HAVE A WINNER: Clonmel's Frank Patterson crowned Tipperary's All Time Great 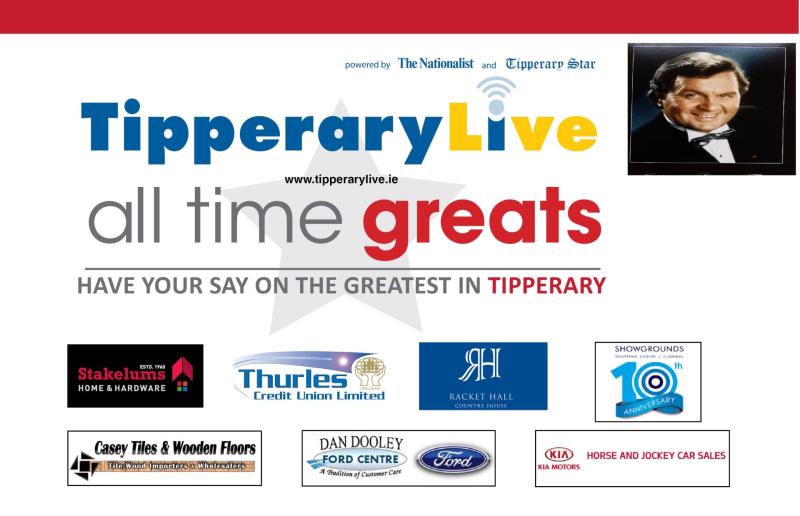 And we have a winner!

One of the greatest tenors that Ireland has ever produced, Clonmel's very own Frank Patterson, has been voted Tipperary's All Time Great in a poll on TipperaryLive.ie.

What a worthy winner the late Frank is.

Blessed with the sweetest of voices, he entertained thousands across the world and brought fame, renown and recognition to his native Tipperary.

And to win this coveted accolade he had to overcome the huge challenge of one of the greatest hurlers that the game has ever known, the legendary Jimmy Doyle.

A member of the Team of the Century and the Team of the Millennium, the Thurles Sarsfields clubman won all his contests on the way to the final and pushed Frank Patterson all the way.

Doyle will always be a Tipperary great but on this occasion our followers on www.tipperarylive.ie opted for an equally remarkable singer.

Like Jimmy Doyle, Frank Patterson died before his time and his funeral in Clonmel was one of the largest the town has seen.

His standing in his home town is also reflected in the wonderful statue in his memory in Mick Delahunty Square – a part of town named after another musical genius.

Frank's recognition in our hugely popular online poll will be warmly greeted by his remaining family in the town and his legion of followers at home and abroad.

Many will remember him from his earliest days with St. Mary's Choral Society and the parish choir.

His talent was recognised at an early age and it wasn't long before he had moved to Dublin to further his career.

Scholarships to London, Paris and the Netherlands followed before he became one of the most sought after tenors on world stages.

He gave an outdoor performance in Washington before an audience of 60,000, performed at sell-out concerts in both the Royal Albert Hall in London and New York's Carnegie Hall and sang for Presidents Ronald Reagan and Bill Clinton in the White House.

Frank also sang before nearly one million people at the Phoenix Park mass during the first papal visit in 1979 and memorably sang Macushla in the film Michael Collins.

He is indeed a worthy winner of our Tipperary All Time Great.