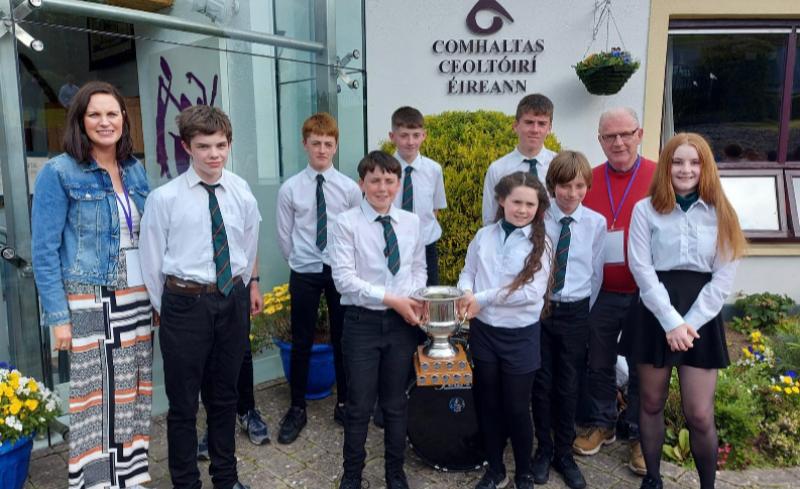 Cashel was the place to be for traditional music, song and dance over last weekend as CCÉ hosted Fleadh Cheoil Thiobraid Árann 2022.
The Brú Ború Cultural Centre in the shadow of the ancient Rock of Cashel provided a stunning setting for the first Tipperary Fleadh Cheoil since 2019.
The week’s proceedings kicked off with a very well attended instrument workshop on Wednesday evening in Brú Ború.
Eamon Cotter (flute), Michael Searson (button accordion) and Paddy Tutty (fiddle) were on hand to share their knowledge and expertise to those in attendance.
On Thursday evening the Teach Ceoil in Brú Ború was the location for a memorable night of song with the ever popular singing circle taking place.
The official opening of the Fleadh took place in Brú Ború on Friday night with Mass celebrated in the theatre by Fr Christy O’Dwyer followed by the official opening in the Teach Ceoil.
Fear an Tí Donnchadh Ó Cinnéide welcomed everyone to a packed Teach Ceoil and introduced Cllr Roger Kennedy and Mattie McGrath, TD, to say a cúpla focal.
Chairperson of Bord Chontae Thiobraid Árann, Bairbre Farrell, paid tribute to all who had made the weekend possible and wished competitors and all involved with the Fleadh the best of luck over the weekend.
Ardstiúrthóir of Comhaltas Dr Labhrás Ó Murchú was in attendance to officially open the Fleadh and remarked how significant an achievement it was for all concerned to have got everyone to the stage after a particularly difficult two years. He referred to the long and exciting journey which brought Comhaltas from the small beginnings of 1951 to the worldwide network which operates today.
At the heart of that journey, he said, was music and friendship. Labhrás thanked everyone for their hard work and was delighted to officially launch Fleadh Cheoil Thiobraid Árann 2022.
A special feature of the night were the two presentations made to two stalwarts of Comhaltas in Tipperary.
Kathleen Nesbitt received Gradam Thiobraid Árann from Bord Chontae Thiobraid Árann for her outstanding contribution to Comhaltas in Tipperary and indeed nationally.
Stalwart Donnchadh Ó Cinnéide was also presented with a significant award on the night from the Ardchomhairle of Comhaltas, Labhrás Ó Murchú presented Donnchadh with Gradam na hÉigse in recognition to his lifetime contribution to Comhaltas.
Donnchadh has been an ever present with Bord Chontae Thiobraid Árann for over 40 years and was also presented with a token of their appreciation on the night. The night concluded with a cupán tae and music session.
Saturday, May 14 saw the first day of competitions in Brú Ború. The sun shone and there was a fantastic atmosphere as music wafted through the air as competitors were dotted around the venue, grounds and car park looking to get some last minute practice and tuning in before competing.
The showpiece event of the weekend was the sold-out concert by the renowned Blackwater Céilí Band from county Tyrone on Saturday night in Brú Ború. They were joined on the night by musicians of Craobh Caiseal Mumhan CCÉ, singer Tahdg Maher and dancers Ciara Horan and Leona Bowe. It was an incredible night of entertainment and one which will live long in the memory of all those in attendance.
Sunday being the final day of the Fleadh saw the conclusion of the week’s activities with remaining competitions taking place in Brú Ború and the dancing competitions in Halla na Féile, street busking competition throughout the town and gig rig on the plaza in the centre of the town.
It was certainly an incredible week of activities and as people left Brú Ború on Sunday evening with the sun on their faces and the Rock of Cashel looking down on them, they all agreed that it was great to be back and that this was indeed a Fleadh for the ages.