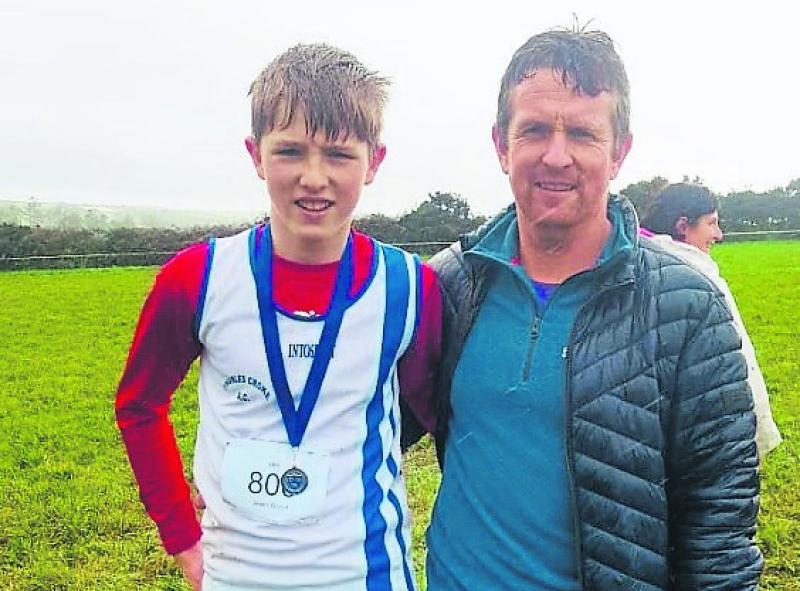 Great running by Thurles Crokes athlete James Doyle who won the Munster B Cross Country championship Boys U15 race in a very wet Cork. James was always to the fore during the race and came home a comfortable winner. Never an easy championship to win, this is a great boost for James who has trained consistently well over the past few months. Well done! Congrats also go to Emmett Fogarty for running a fine race to win at the County schools cross-country championships at the Crokes Complex. He ran a positive race throughout and maintained a strong drive to the finish line in a competitive race. Also well done to Jack O’Mara and Darragh Minogue whose strong and determined running yielded individual honours. Overall winners on the day went to Thurles CBS with Alex Crowley and Stephen Mawe contributing to the team win.

Tipperary Masters Cross Country
Thurles Crokes hosted the County Master Championship on Sunday last, with large numbers competing in each race.
In the men’s race Stewart Maloney took the race around at a mighty pace shadowed all the way by John Treacy and John Fitzgibbon leading out the blue and white charge, closely followed by Liam Shanahan, John Russell, Willie Shanahan and Austin Ryan.
John Treacy put in a fighting performance all the way to the line to claim the silver 035 medal, with John Fitzgibbon claiming the O35 individual bronze, backed up by Liam 7th and John Russell 9th (2nd O40). This superb team performance ensured the men claimed the gold team medals and took home the masters cup for 2018. Willie in the 0/40 and Austin in the 0/45 finished well up the field supporting the team on the day.
In the ladies race we had Madeline Loughnane, who was returning from a broken ankle, finishing a strong 3rd O35. Carmel Fitzgibbon was close on her heels to finish 5th. Paula Mills made a strong returned to the cross country pushing all the way to the line finishing 16th to bring the ladies 0/35 home and secure the silver county team medals. Martina Ryan running strong all the way to finish in 10th position won gold in her new category 0/50, with Brid Quinlan taking it all in her stride running a strong consistent pace from start to finish to finish in a great 25th position.
Well done to every athlete who took part.
Tipperary Juvenile Cross Country Relays
Thurles Crokes hosted the juvenile cross country relays on Sunday last. Each team had to complete a set of 4x500m.
There was great running by all athletes where the club had 4 teams take part on.
Our U10 girls had a great run, narrowly missing out on a set of medals finishing 4th.
Next up our U10 boys team again, most able to run again next year in the same age, had a great run out for the club.
Our U12 and U14 girls also had great runs over the distance again unfortunately missing out on medals but battling hard to the line.
Super running by these young athletes it will be great to see them progress over the 2019 season.
Well done to everyone.