Mooreabbey Miler athlete Hartnett back on top with Galtee glory 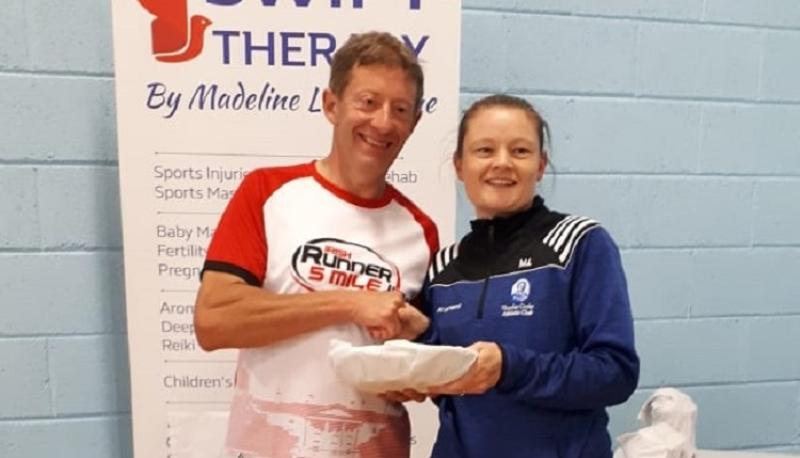 Willie O'Donoghue accepting his prize at the Dave Fogerty 4 Mile

Galtee Crossing
The Galtee Crossing took place last Sunday morning in miserable weather conditions with a climb of 1500m and a distance of 32.00km to be covered in poor visibility this was going to be the makings of a difficult journey across what should have been the beautiful skyline of the Galtees. It was part of The Munster Long Distance Championship with mandatory kite numbers to be collected along the way. The Route started in Angelsborough, then on to Templehill for Kite no.1. Lyracappul Wall Start (R846-232) Kite no.2. Wall Corner (R863-242) Kite no.3 Galtymore Cross Kite no.4. Galtybeg high point (R890-241) Kite no.5. Farbreaga, cairn at end (R934-249) Kite no.6. Rocky out crop Kite no.7. Slieve an Airde Fence 992-258 Kite No.8. Bain trig point, last high point (S007-269) Kite no.9. Hammer head (S010-269) Kite no.10 and then on to the finish at Cahir Castle car park. The club was well represented on the day with Dariusz Gazdowicz, Tom Blackburn, Kevin Lenihan, Barry Hartnett, Denis Ryan, John Hayes and Robert Cunningham taking to the crossing. The first person to fall foul to the weather conditions was Tom Blackburn losing his way on Templehill followed by Dariusz Gazdowicz. The first club man to make it across and down in just over three and a half hours and crossing the line 1st in Cahir was Barry Hartnett followed in 4th by Kevin Lenihan. Next into Cahir was Robert Cunningham followed by Denis Ryan and John Hayes. 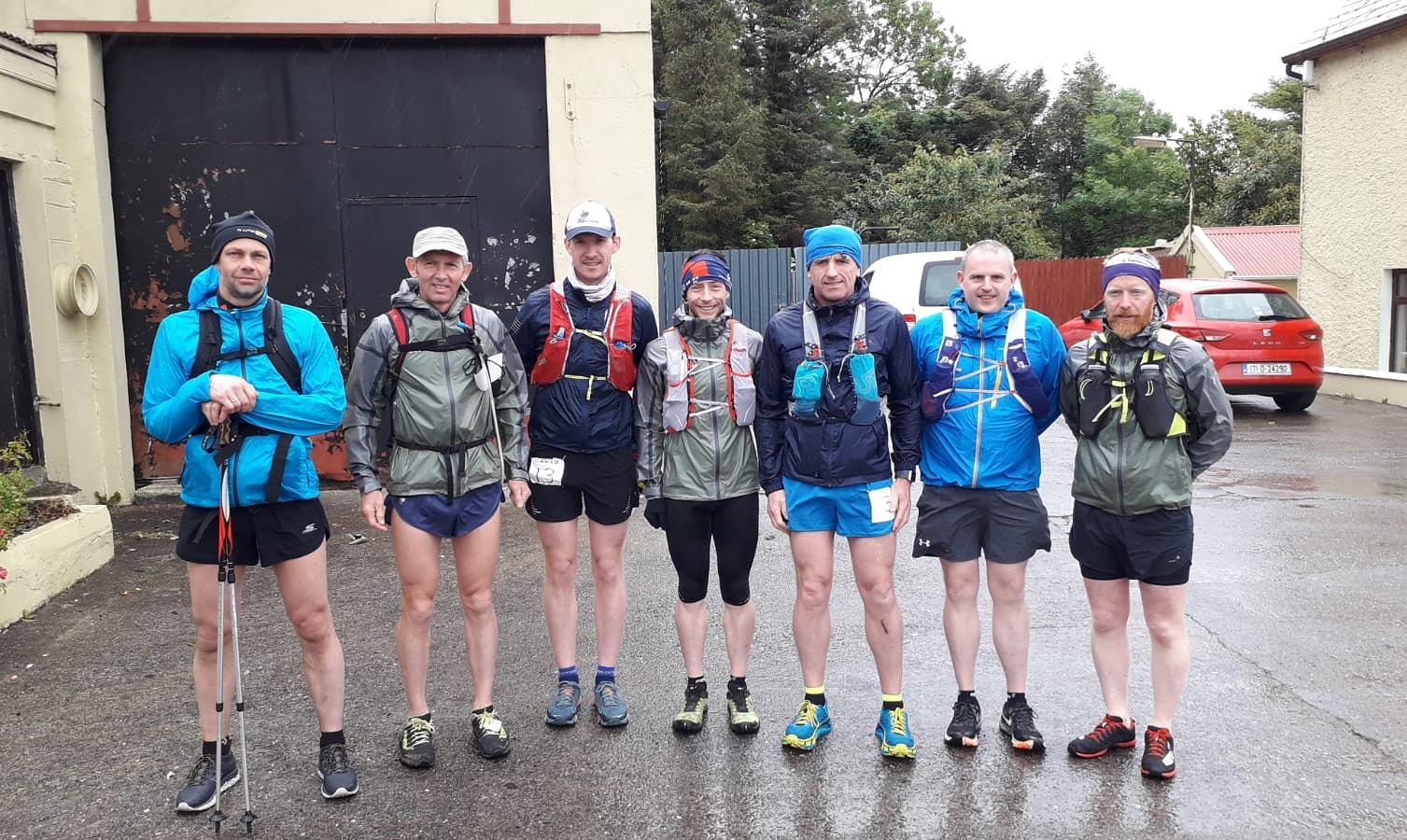 Dave Fogerty 4 Mile
The Dave Fogarty 4 Mile was held on Thursday last in Thurles and hosted by Thurles Crokes AC. Racing conditions were humid and dry with quite a strong breeze to contend with, the only assistance from the breeze was coming in the home stretch to the finish. Advice was given to hold some back for the final half mile incline, but it turned out to be a course of hill after hill after hill. Willie O'Donoghue represented the club and ran home in 9th position and took 1st in category.

Newtownshandrum 4 Mile
On Friday night Evan Wright, Mary Pyke, Patricia Ryan, Mary Hinchy and Jason Wright were in Newtownshandrum for the latest run in the Ballyhoura Active Series.
The Ballyhoura Active Series was established in 2010 and consists of a series of road races organised by Athletic Clubs in the Ballyhoura  region. These races are organised over the Spring and Summer months at different venues these range from 5k to half marathon distances.
Friday's night's race was a hilly 4 mile testing course. Mary Pyke finished 1st in her category while Mary Hinchy was 2nd in her's. 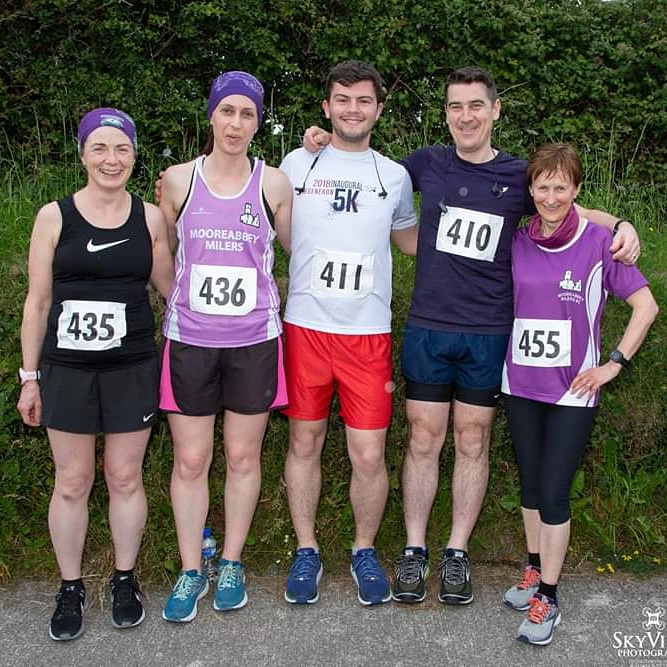 Cahir Half Marathon & Relay
'3 days left to register' Don't miss out.
This year the Cahir Half Marathon & Relay will take place on Saturday, July 6 at 11am in the picturesque town of Cahir. The race itself is AAI permit granted with a stash of cash up for grabs on the day but once you have the hard work done you'll receive a bespoke medal, goody bag, juice from the Apple farm, chip timing and Cahir physio at the finish line with music and entertainment provided at the finishing area for you and your family. We would like to thank this year's sponsors Cummin's Financial Services, Cahir House Hotel, Morrison's Pharmacy, Hinchy's Garage, Quirke Jewellers, Promec Technologies, Supervalu Cahir, The Apple Farm, Aldi, Discover Travels, Surecom, Lava Rock and Abbot Vascular & Caplice Auctioneers. Last day for online registration is Sunday, June 30. Entry fees €30 half marathon and €40 relay. Register today online with www.runireland.com

Mooreabbey Milers Club events for 2019
● Cahir Half Marathon and Relay (Saturday, July 6). We have a massive €500 for first male and female home in this one.
● Mile Dash (Saturday, December 28)