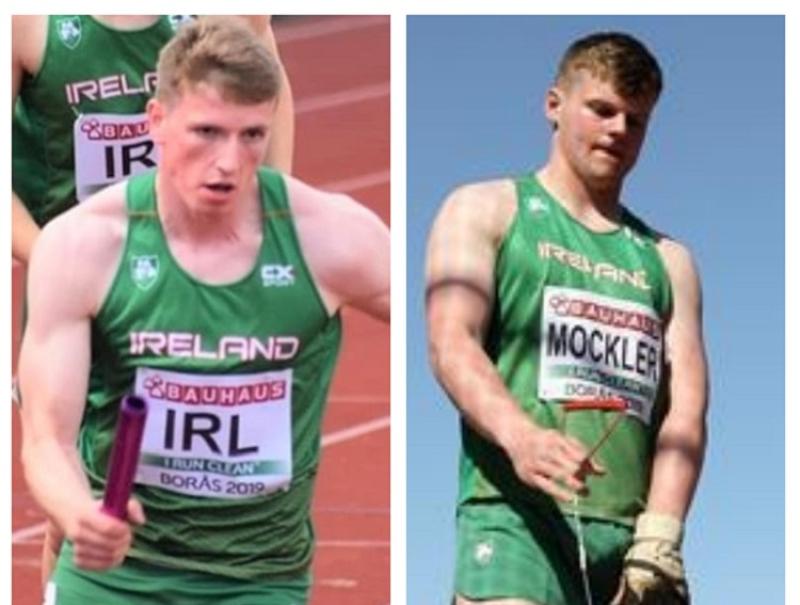 David Ryan and Sean Mockler Tipperary and Moycarkey Coolcroo AC who represented Ireland at the U20 European Championships in the Hammer Throw and 400m relay July 18 to 21, 2019 Boras Sweden

European U20 Championships Sweden
Last week we had two athletes David Ryan and Sean Mockler who represented Ireland at the U20 European Athletics Championships in Borås Sweden. On Thursday, July 18 Sean Mockler was up to compete in the Hammer Throw on Day 1 of the Championships. Alongside 32 athletes Sean was drawn in the first group of 16 where he was third person to throw. Sean didn't look fazed on the big stage and threw close to his best with a throw of 67.34m which put him in 9th place with the top 12 to qualify for the final. Unfortunatley after the second group competed he was moved down to 18th place out of 32 of Europes best athletes which is a fantastic achievement and valuable experience for Sean and a proud moment for his family who were there to share the moment and cheer jubilantly after each throw.

David Ryan competed on Saturday, July 20 as part of the Irish 4x400m relay team. An exciting race with Ireland seemingly out of contention coming up to the last baton change over to which David Ryan was allocated and had a strong run to race home Ireland into 3rd place and thus qualified for the final. The final was held the next day on Sunday evening 6:30pm Irish time with David again on the last leg or the relay he ran another very good race with the team running 2 seconds faster than previously but alas it was not to be on this occasion with Ireland finishing 7th in a very tight final but a marvellous achievement for David & the Irish team. A great experience for all involved and hopefully it will spur them on to greater things in the future. Well done to all. A great achievement and a great few days for David Ryan, Sean Mockler and Moycarkey Coolcroo hopefully it will inspire the next crop of young athletes to work hard and compete to the best of their abilities. David Ryan and Sean Mockler were also in the same class together in Scoil Mochaomhóg Naofa NS Two-Mile-Borris.

National Bronze for Anna
Well done to Anna Ryan who won an All Ireland Bronze with the Tipperary Womens Athletics Team that competed at the National League Final in Santry Dublin on Saturday July 20. Special thanks to Tipperary Athletics Support team of Aisling Hoey, Pauline Martin & Emby Walsh who do fantastic work in help in supporting and advising of Tipperary Athletes at National events.