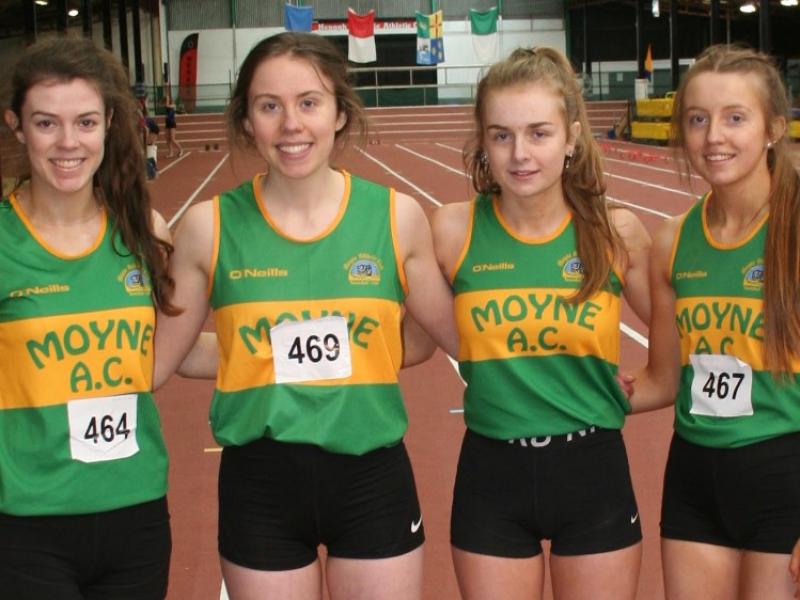 County Senior and Masters’ Indoor Track & Field Championships
The County Senior and Master Indoors were held in Nenagh Indoor Stadium on Sunday December 29. 21 men and women donned the club singlet for a day of competition. There were 4 sets of relay medals won, along with 16 gold, 7 silver and 4 bronze individual medals. Not bad for the first day out of the indoor season!
The first event for the Moyne athletes was the 60m sprint. Katie Bergin, Aisling Dwyer, Leona Maher and Louise Hickey took to the start line for the senior race. Katie finished 2nd in 8.43, Aisling was 3rd in 8.51, followed by Leona in 4th 8.84 and Louise 5th in 8.96. Ciarán Dwyer and Jack Hickey were up next in the Senior Mens sprint where Jack qualified for the final and finished in the 6th in 7.66. In the O/35 60m Ber Spillane was 2nd in 9.28 and in the O/55 60m sprint Ray Power was 1st in 9.67.
In the senior women’s 200m, Katie clinched 1st place in 27.30, Aisling ran a PB of 28.14 for 3rd and Leona was 5th in 30.35. Jack Hickey and Paul Moloney were in action in the senior men’s 200m where Jack held on to first place in 23.78. Paul who was competing in his first competition finished 8th in 27.44. In the master’s category, Ber was 1st in 32.45 and Ray finished 1st in 31.97.
Emma Gleeson and Aoife Dwyer were in action in the senior 400m. Emma finished 1st in 1.09.56 and Aoife was 2nd in 1.14.08. Out on the track once more were, Ber and Ray. Ber was 1st in 1.11.70 in her age category, and Ray finished 1st in 1.12.21 in his category.
In the senior women’s 800m, Rachel Butler ran a strongly to finish 1st in 2.47. Nathan Bowe took to the track for his senior 800m, where he narrowly missed out on bronze and finished 4th in 2.17.05. In the O/45 800m, Brigid Gleeson was 1st in 2.54.10 and Michelle Percy was 2nd in 3.03.89. Sharon Cantwell competed in the senior 1500m where she finished 2nd in 5.29.13 and in the men’s O/45, Patrick Bowe was 1st in 5.11.13.
In the field events, Leona was 2nd in the long jump. Aoife Dwyer was 2nd in the high jump and 3rd in the shot put. Ciarán finished 1st in weight for distance and 3rd in the shot put. Edmund Dwyer was 1st in O/55 weight for distance and shot put and Naomi Morrissey O/40 was also 1st in weight for distance and the shot put. Ber was 4th in weight for distance.
The last track event of the day were the relays. The team of Rachel, Aisling, Emma and Katie won senior gold in style. They set a new 4x200m club record of 1.55.77! The senior bronze medal winners were Leona, Tara Gleeson, Louise and Aoife. The senior men’s relay team of Jack, Nathan, Ciarán and Paul won silver in 1.45.52. Last but by no means least, the master women of Brigid, Ber, Michelle and Edel Delaney won gold. Very fruitful results from all 4 relay teams!
Well done to all the athletes who competed and represented the club so strongly. What a fantastic end to 2019! 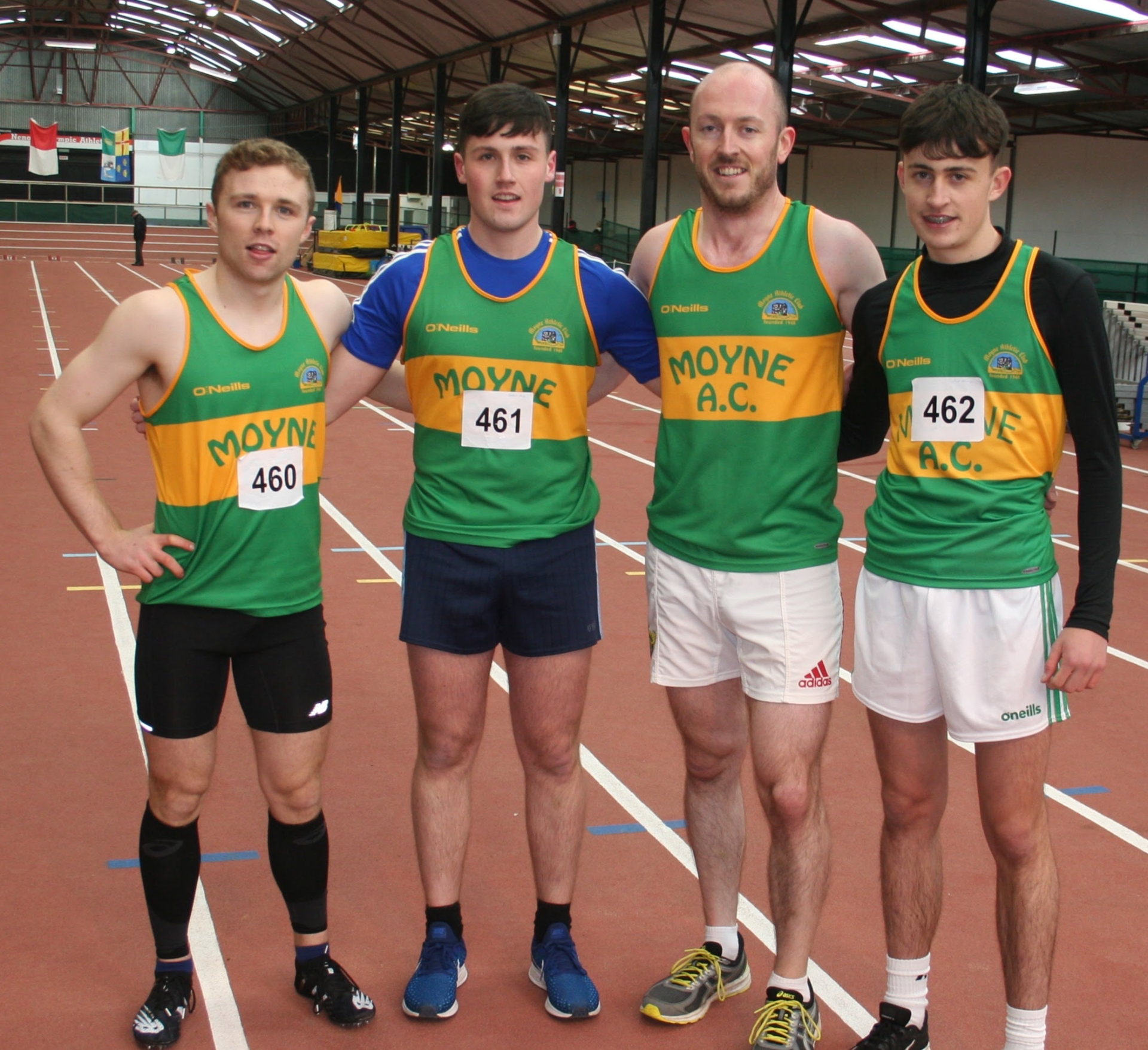 Christmas Morning Mile
Sincere thanks to everyone who came and supported our Christmas morning mile. The event, now in its 20th year, is still contributing much needed funds to charities, local and national and this year was no exception. While the day started out chilly and frosty it did not deter the near 200 people who contributed a total of €1,200 for this year’s charity “Mo Chara Animal Rescue”. Once again, many thanks to everyone for their generous support.

Annual Club Presentation Night
The club will host its annual presentation night this Thursday night, January 2 at 8pm. All medals won during the recent cross-country season by our juvenile athletes will be presented on the night. Also being presented are awards for “Athlete of the Year”, “Most Improved Athlete of the Year” and Track & Field and Cross-Country Athletes of the Year in Juvenile and Senior categories. We hope that all members will support this event.

Club Annual General Meeting
The annual general meeting of the club has been set for Friday, January 17, 2020. The meeting will commence at 8pm sharp and all members are invited to attend.

Registration for 2020
Registration forms for 2020 are now available in the club house. All members, juvenile and senior, need to re-register for the new year. Completed forms and the appropriate monies should be given to club registrar, Sharon Cantwell, as soon as possible. Closing date for registration is Friday, January 17. Please remember that all those attending training must be registered. 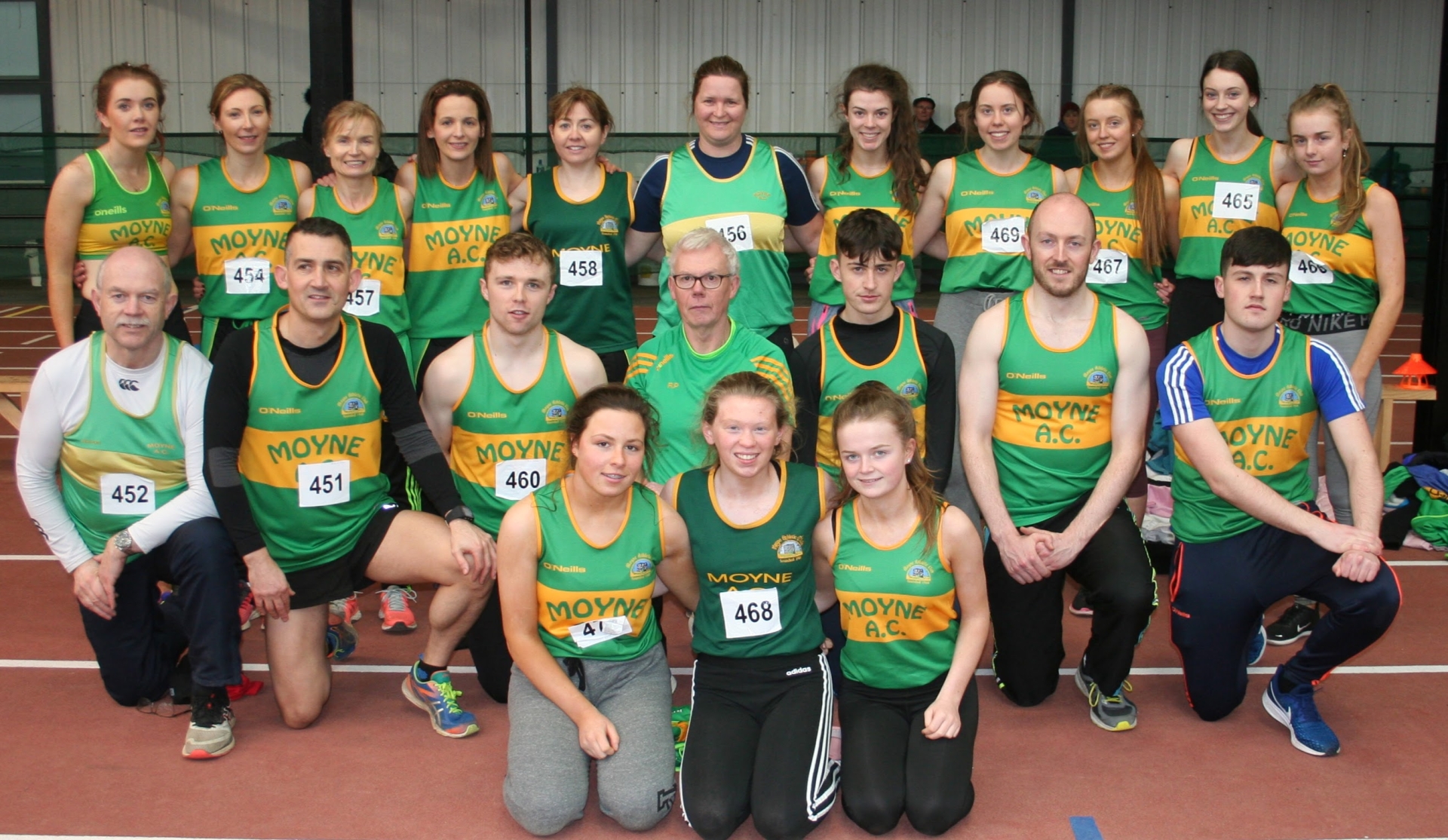