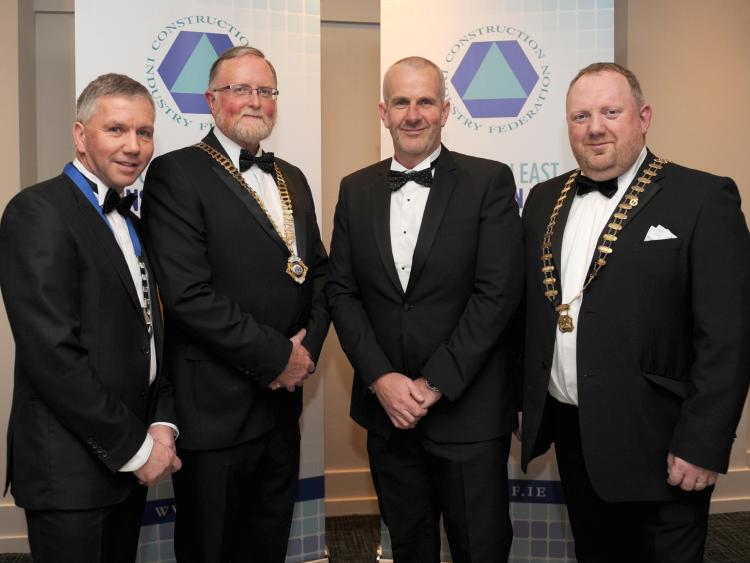 The South Eastern Branch of the Construction Industry Federation (CIF) held its annual construction dinner in the Tower Hotel on Friday, February 7 with 170 in attendance. The event is the largest social event in the Region for the construction industry and brings together stakeholders from all areas of the construction industry. Local companies such as Tom O’Brien’s, R McDonald & Sons, Suir Engineering, Winthrop, Clancy Construction and Morris DIY, joined dignitaries such as Waterford City & County Metropolitan Mayor Breda Brennan, Michael Walsh, Chief Executive of Waterford City & Council, Senator Paudie Coffey, Tom Parlon, Director General of the CIF, and Pat Lucey, President of the CIF. CIF South East Branch Chairman John O’Shaughnessy hosted the event.

In his speech John O’Shaughnessy, Director of Clancy Construction referenced the CIF South East Branch Election Manifesto which was recently released . “The manifesto highlights how the population of the South East increased over the last decade despite the economic downturn. The National Planning Framework “Ireland 2040” aims to grow the population further in Tipperary, Wexford and Waterford. Indeed the population of Waterford (City and Suburbs) alone is due to increase from the current figure of 54,000 to 81,000 by 2040. This predicted population growth means it is of upmost importance that the Government invests more in the construction of roads, cycleways, public transport, schools, hospitals, flood defences and many other types of public works in the South East. Key infrastructural projects in Waterford include:

Technological University for the South East (TUSE). Establishing the TUSE is agreed by all major stakeholders in the South East Region as the most important economic driver in the Region.
Irish Water Upgrades (New Water Infrastructure is critically needed in Clonmel.)
Waterford North Quays. This €500m development requires €104.5m from the Governments Urban Regeneration and Development Fund to build a new pedestrian bridge and public transport hub.
The National Planning Framework “Ireland 2040” recognises the need for greater investment in regional infrastructure projects. It is essential that projects in the South East are not put at risk due to very large proposals in the Dublin region.

Housing has been a key issue in pre-election debates, with all parties promising an increase in housing supply. In our manifesto we try to highlight actions that can be carried out to increase housing supply in the South East. The CIF believe the state need to fully support the First Time Buyer as part of their housing strategy. A shared equity scheme, in conjunction with the Help to Buy, will enable the average couple secure a mortgage.

Only 21,500 new homes were built nationally last year, of that approximately 7,000 were one offs, 7,000 social and 7,000 scheme developments with the majority of those scheme developments in the Greater Dublin Area. Hence there were very few homes available to purchase for the first time buyer.

Homebuilders have seen a shift in the policy towards Housing Density in the past year or two which is having an impact on supply. Housebuilders are struggling to deliver houses and apartments particularly outside Dublin due to planning guidelines that dictate a minimum of 35 units per hectare. Introducing flexibility on densities on a regional or market basis would maintain construction quality whilst allow regional homebuilders to secure finance to build much needed homes around the country.

At present hard construction costs represents just 46 per cent of the all-in construction costs of a new home. Taxation, levies, Vat and engaging with utilities make up the majority of the balance cost to the potential homebuilder.   Reducing the cost of these levies and taxes will enable more homebuilders to secure finance so they can build more affordable homes.

John also said “Substantial new housebuilding targets have been set by nearly all political parties with figures of up to 200,000 new homes to be built in the next five years. This is at a time where there is a significant shortage of skilled craft workers and third level graduates coming into our industry. To try and increase the numbers the CIF has embarked on an ambitious campaign to promote Careers in Construction.

The event is run every year in early February and is open to all Construction Industry Stakeholders. John O’Shaughnessy is Chairman of the South East Branch of the CIF and is Managing Director of Clancy Construction.