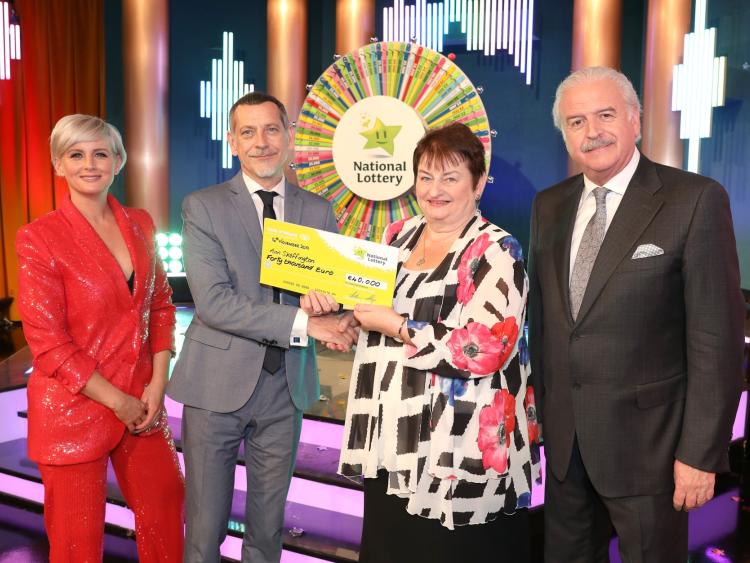 A grandmother from County Tipperary won a fortune on the National Lottery’s Winning Streak gameshow on RTÉ One last Saturday night.

Cashel's Ann Skeffington, who is now €40,000 richer, had been harbouring a secret for most of last week. She knew her scratch card with three stars was in the final 100 for the Winning Streak draw as a National Lottery official called her during the week to confirm her address. However, Ann kept the secret from everyone including her husband and children as she said that “if my name doesn’t come out, then it will just be me who is disappointed."

Ann spent Saturday trying to keep busy but she couldn’t get her mind off Winning Streak, having even spent the morning with her daughter. Even when the RTÉ programme began, she could barely handle the anticipation so she started prepping the Sunday dinner for the following day. She was peeling potatoes when she heard her name come out and she couldn’t believe it. With that she told all her family the good news and said her phone never stopped ringing until Sunday with friends and family wishing her all the best.

Ann has been married to Jim for the past 47 years and the couple have three children (Padraig, Sean and Siobhan) and they are proud grandparents to 10 grandchildren. They were all, with the exception of a couple of the youngest grandchildren, in the Winning Streak audience in RTÉ last Saturday.

Ann is originally from Athy, County Kildare, where most of her family still live, including her four siblings (Thomas, Anthony, Martin and Mary). Herself and Jim moved to Cork for a period (with Jim’s job in the Ordanance Survey) and then he was sent to work in Tipperary, where the family settled in Cashel.

After Saturday’s show, the entire group travelled back to Tipperary to celebrate in her local Gleeson’s Bar in Cashel. With Christmas only around the corner, Ann said that she plans to treat her family with her €40,000 winnings.