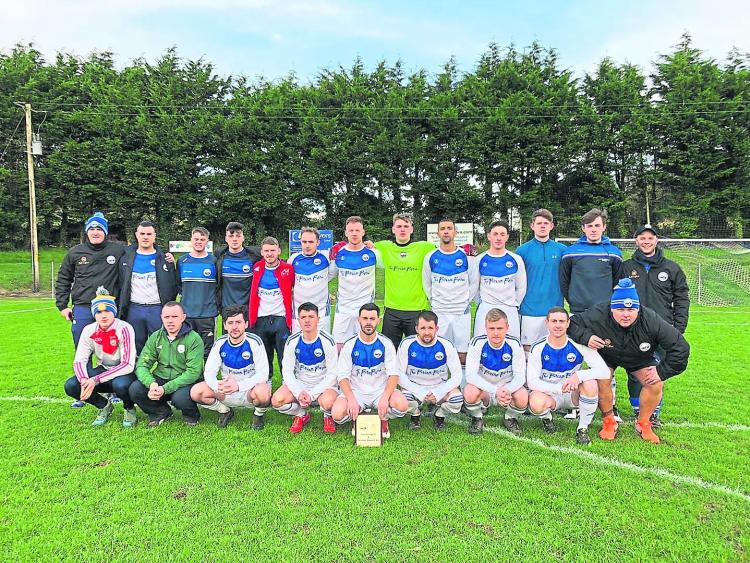 Cashel progressed to the last 32 of the Munster junior cup with a hard fought Christmas fixture over a good Oldbridge side.

This game at times might have lacked great skill and fluency on the ball but the same couldn’t be said in work and physicality from both sets of players.

It really was a great cup tie where nothing was left behind and Cashel came out winners, 3-2.

Oldbridge took the lead on 20 minutes against the run of play but Cashel stormed into the game and after two super saves by the Oldbridge goalkeeper, there was little he could do about a fine strike from Niall O’Brien on 25 minutes.
Cashel were now well on top and made it 2-1 on 34 minutes when James Harding made the most of Michael McDermott’s long throw with a cool finish to the top corner.

Cashel had two more great chances to make it 3-1 before the break but it wasn’t to be.

The second half was an entertaining game as Cashel made it 3-1 ten minutes into the half from the head of Niall O'Brien but credit to Oldbridge who battled all day for everything.

They made it 3-2 on 68 minutes and set up an entertaining final 20 minutes.
Both sets of defenders played very well in some last ditch defending.

Dathi Hall and again we mention Ian Hahessy who never stopped all day and impresses more and more every week. There was to be no twist in the tail and Cashel progressed with a 3 - 2 win.

It really was an enjoyable cup tie and Cashel showed loads of spirit to continue their unbeaten start to the season.
This sets up another titanic battle in Oldbridge this coming Sunday in round one of the Paddy Purtil cup.
Oldbridge showed on the day they are a match for anyone and again this Sunday coming, that will be no different so we wish them the best for the season.

James Harding and Eoin Byrne were again a handfull with Niall O'Brien linking up well.
Chilly Fitzell in goal making his first start of the season had a fine game but star man was Michael Colman who is going from strength to strength and showing great leadership in the side.