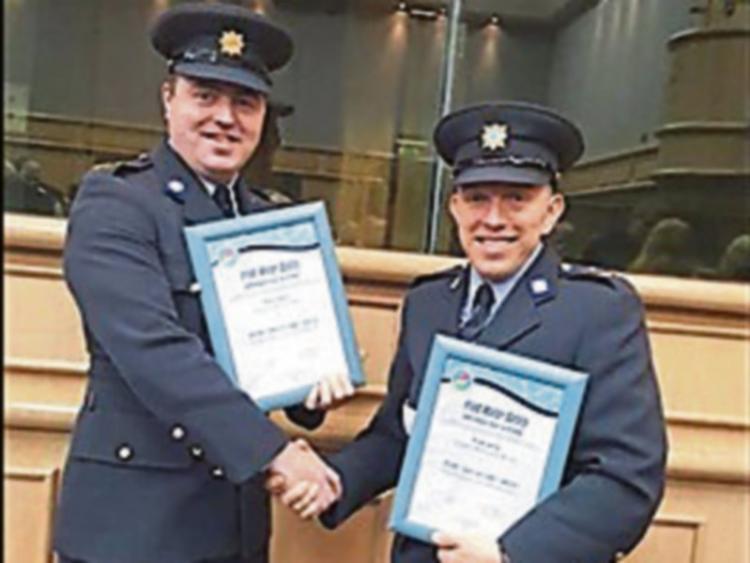 Gardaí Brendan Ryan and Brian Batt with their awards.

Two Tipperary gardaí have been honoured for their bravery and quick thinking that saved the life of a man in Clonmel.

The Clonmel based gardaí were presented with Irish Water Safety and SEIKO Just In Time Awards in Dublin Castle on Wednesday of this week (November 29).

Recognition for the gardaí came following an incident on the River Suir in Clonmel, in the summer of 2016.

On August 8, 2016, Gardai received a call that a person was in difficulty in the water at New Quay, Clonmel.

Gardaí Brian Batt and Brendan Ryan rushed to the scene where they observed a person floating face down in the water.

Both gardaí entered the river, waded out 15 feet, pulled the man out of the water and brought him to their Garda patrol car where Garda Batt began chest compressions while Garda Ryan drove towards the hospital.

They were met by an ambulance crew en route. The man made a full recovery.

The Nationalist reported on the brave actions of the gardaí - click here to read the story.

Last year another group of Tipperary gardaí were honoured for their actions when they rescued a man who had fallen in to the river Suir in Clonmel.

Irish Water Safety honoured 30 people who have saved others from drowning, at this year's ceremony.

Mr Michael Ring TD, Minister for Rural & Community Development presented the “Seiko Just in Time Rescue Award” to rescuers in appreciation for saving so many lives. Minister Ring said: "It is an honour to pay tribute to these courageous and deserving award recipients. Tragically an average of 133 people drown in Ireland every year and although that’s 133 too many, the figure would be even higher but for the dramatic efforts of these individuals who saved others from drowning and the ongoing work of volunteers teaching swimming and water rescue skills.”