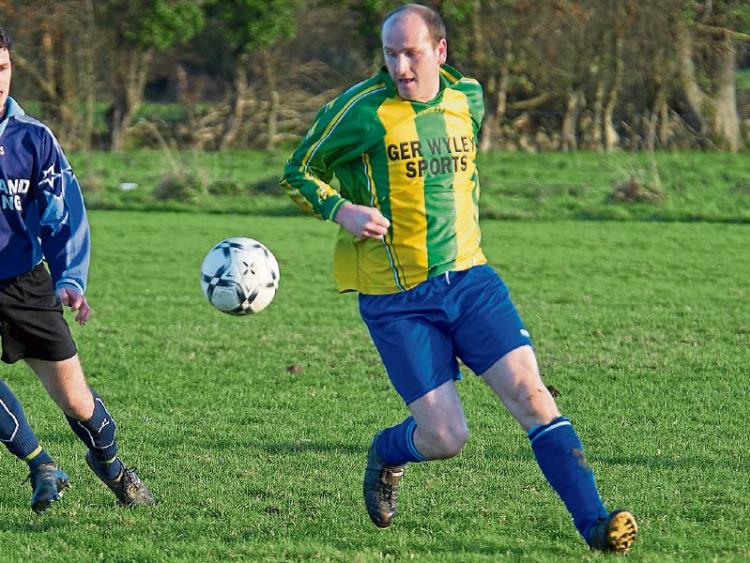 The evergreen Connie Power who got Kilmanahan United up and running with their first goal of the season on Sunday last in their 3-2 win over Cashel Town.

In what was a very emotional game for the home side after a number of tragedies in recent weeks, Kilsheelan started this game on the front foot and took the game to the Cahir fashioning some very good scoring opportunities. The best of these came in the 25th minute when they were awarded a penalty after Mark Heffernan was fouled in the area, but the spot kick was saved by the visiting keeper. Adding insult to that injury five minutes later John Allen volleyed to the net to open the scoring for the Park leaving the home side gutted.

The second half was only four minutes old when Ronan Quigley thought he had equalised only to see his effort come back off the upright and away. Kilsheelan finally got back on terms when they were awarded a second spot kick and made no mistake on the second occasion. Both teams were reduced to ten men 13 minutes from time as two players picked up second cautions and in the last major act of the game a third penalty was awarded, this time to the visitors, and slotted home by Paddy O’Donnell to give his side the three precious points.

The visitors may have went through the whole of last season undefeated, but they were welcomed to Division Two by a Kilmanahan United side in no mood to roll over and who took the spoils by the odd goal in five after a well contested game.

Kilmanahan got off the mark with just 11 minutes on the clock when some great work by resulted in a Connie Power goal. Six minutes later Power turned provider when his corner kick found Darren Guiry who hammered to the net to give the home side a two goal lead.

Josh Dolan made a monstrous save soon after the break with no sight of the ball until the final second to keep his side in front. And ten minutes later Damien O’Donnell netted from close range to put his side 3-0 up.

Cashel started to turn the tide and came much more into the game netting on the 69th minute to keep themselves in the game, and with only two minutes remaining the visitors netted again after a failed clearance to give the home side a shaky final few minutes.

They held out however and will carry on the season hoping for more days like this.

This West Tipperary derby clash looked to have stalemate written all over it until the visitors produced a late flurry of goals to give themselves a victory that had perhaps a more flattering scoreline than was fair on the home side. Donohill had more than matched their opponents and could even have opened the scoring had they been more clinical at times. But with 20 minutes left Cullen broke the deadlock with an excellent effort from Michael Elliot. Minutes later they doubled their advantage when Stephen O’Dwyer scored from the penalty spot, and inside the final ten minutes a brace of goals from Pakie Farrell and Sean Tate ensured that the visitors would be taking the three points.