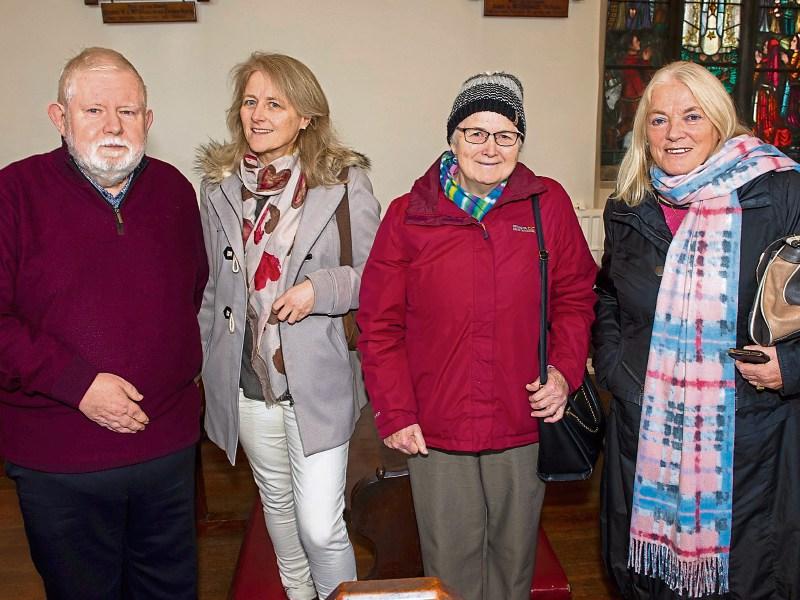 Full caption for above picture: Photographed at the Memorial Mass at the Augustinian Abbey Fethard to mark United Nations International Day of commemoration for road traffic victims on Sunday, November 17, were from left: Sean McGovern, Helena Fitzgerald, both relatives of the late Fr. John Meagher OSA whose second anniversary mass was also on Sunday, Mary Fitzgerald, a sister of Fr. David Fitzgerald OSA, and Noeline O'Donovan, a sister of Fr. Iggy O'Donovan OSA, who travelled home from Germany for the memorial Mass and who also lost a brother due to a road traffic accident.

Some twenty years ago the United Nations adopted a resolution declaring that the third Sunday of November should mark an international day of commemoration for road traffic victims.  It is now observed in many countries and in recent years the cause has taken off in Ireland.  It is in keeping with that spirit that in the past two years it has been marked with a special celebration in Fethard’s Augustinian Abbey.

On Sunday last a service was organised in the Abbey to commemorate all who have died or been injured resulting from road traffic tragedy. The Augustinian Prior Fr Iggy O Donovan presided, and he was joined by a large gathering of the Fethard community along with people from surrounding parishes.

A notable feature of the celebration was the presence of a group of students from the Patrician Presentation School who helped to organise and participated in the liturgy.

Also present were members of the Gardaí along with Deputies Mattie McGrath and Seamus Healy.

The Abbey choir were in tremendous voice and greatly added to the solemnity of the occasion.  Also present were numerous people who had been affected in one way or another by road traffic tragedy.

A variety of gifts were brought to the altar all highly symbolic of the sombre event which was being celebrated. Fr O’Donovan mentioned that while road traffic fatalities make for grim reading the figures compare very favourably with those of a generation ago. Indeed, they are only a quarter now of those of the 1970s when there was only a fraction of present day traffic on the roads.

He also mentioned that in providing services of this kind our church which has become so irrelevant in so many ways can in fact relate to reality.