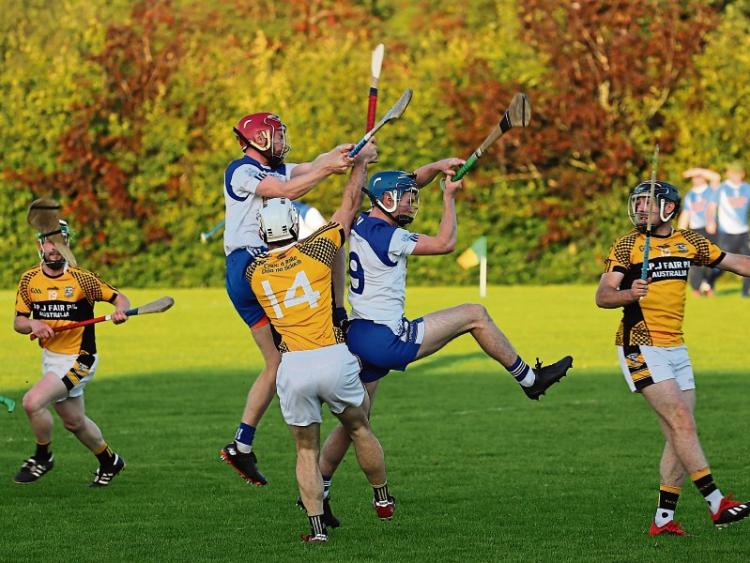 It was a game that could have gone anyway but eventually went the way of Cappawhite. Their confidence tested at various stages of the first half but their finish to that half, 1-3 without reply in the last six minutes to lead at the break was the turning point for them.

From the off the game started at a fierce pace. Ciaran Ryan P opened Cappawhite’s account with a point only for the next attack to finish with a Dean Thompson raising the first of five green flags in the game. Kickhams looked in control and Devon Ryan added two points from play to add to their advantage. Willie Barry added to his credentials with a lovely taken sideline cut resulting in a point and he doubled his tally a minute later with the game’s first score from a placed ball.

John McGrath cut the gap to a point but all Cappawhite’s good work was undone less than a minute later when Shane Morrissey goaled. Ross Dunne added his first point from corner forward but again Kickhams responded with another two points from placed balls through the in-form Devon Ryan. Ryan causing serious problems for the Cappawhite defence. Ross Dunne chipped in with another but again Devon Ryan ensured the gap remained at five points. Willie Barry (free) and a good effort from Colm O’Dwyer had Kickhams just three points ahead at the end of the first quarter 2-5 to 0-8.

Kickhams who enjoyed good possession just couldn’t get further daylight between themselves and their opposition. Dean Thompson added point to his earlier goal and Nathan Ryan who had come on as a substitute added a point from long range. The gap went between four and five again when Will Barry (free) and Nathan Ryan (free) swapped points. This would be Kickhams last score of the first half with eight minutes remaining. Ciaran Ryan P, Willie Barry (free) and Rian Doody all pointed in the last six minutes but the turning point of the half came in injury time when Colm O’Dwyer got a run on the Kickhams defence at the far side of the field from the stand. Getting in on goal he shot to the far side of Aaron Browne to see Cappawhite ahead at the break 1-12 to 2-8.

Kickhams started the second half with intent and David Butler got his first point of the game. They had further chances to level. Then Cappawhite got a huge boost when Dara McCarthy finished the sliotar to the net after Aaron Browne had made a great save from him. Willie Barry pointed a free and Cappawhite were four points up six minutes into the half. Kickhams rallied and soon found a purple patch. Ger O’Dwyer got in for a lovely point, with Ger Browne getting his first. Devon Ryan pointed a free and Paudie Slattery added another from play. The game all tied up for just the first time since John O’Grady threw in the sliotar.

Twelve minutes now left to find a winner. Sean Ryan W restored Cappawhite’s lead and less than two minutes later he added a goal. Dara McCarthy won possession and gave a perfectly time hand pass to the advancing Sean Ryan W and he made no mistake with his finish past Aaron Browne. Willie Barry put the gap out to five with another point from play. Dean Thompson responded with one for Kickhams and Michael McCormack got in for another which could easily have been a goal.