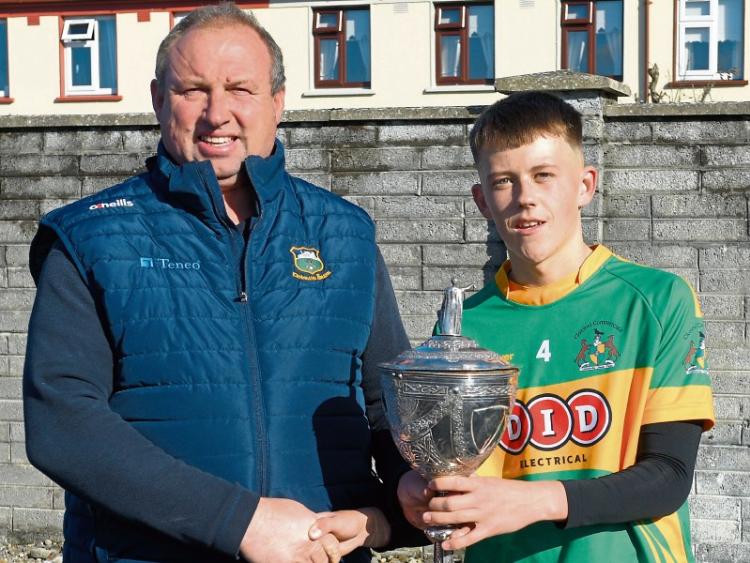 County U16 ‘A’ Football Final

Clonmel Commercials took control early on and never looked in trouble, as they exploited the space afforded to them. The full forward line were excellent, more so in a first half that set up the win.

Arravale started as they would’ve hoped, on the front foot controlling territory. Commercials keeper Shane Ryan was called on, capably clearing his lines. The balance of play shifted, yet it was Arravale that scored first with captain Caleb Molloy Hickey pointing. That was just a brief foray forward as Commercials went on to hit 1-4 before the next Arravale score.

Anthony Keeley gave a master class and was key to the win.

Anthony was fouled and Gearoid Daly converted the free before the always lively Deckie Nee fired over to take the lead. Anthony opened his account with a point, going on to score 2-3 and assist in five others. He finished two and three-man moves with points. They were followed by a killer goal, assisted by Conor Parker, with Anthony finishing well.

Arravale  had chances but  three of note went wide and another produced a good save. They added two points through Caleb Molloy Hickey’s free and Jack Ryan. Arravale’s more deliberate approach left space in their back line. Anthony Keeley set up the next two points, which Gearoid Daly and Deckie Nee scored.

COUNTY UNDER 16 ‘A’ CHAMPIONS. The Clonmel Commercials side who defeated Arravale Rovers in the County Coiste na nÓg under 16 ‘A’ final at Dundrum on Saturday last pictures: MICHAEL BOLAND

The last score was well worth the entry fee as Conor Parker, almost on the side and end lines, floated over a brilliant point, to make it 1-7 - 0-3 at the break.

Arravale had a carbon copy start to the second half and  hit the first point from the boot of Caleb Molloy Hickey. However Commercials  responded with an Anthony Keeley point.  Arravale managed the next score, an excellent Michael Lowry effort. Yet instead of starting a fight back the six-point deficit would be more than doubled in a short spell. Conor Parker and Gearoid Daly points came before a two-goal salvo. Matthew Kavanagh made a great save but the quick- thinking Anthony Keeley punched home. The second was a loose ball that Cian Smith hit first time, ending in a goal. Arravale’s attempts for goals were repelled and they only had an Eoghan Lonergan point over the last ten minutes. Clonmel Commercials added two more points from  Cian Smith and a well-received Luca Dennehy point that he worked hard to convert.

Arravale Rovers will have learned a lot from their run to the final - being at the business end of these competitions brings players on. Shane Maher, Caleb Molloy Hickey, Ben Ryan and Michael Lowry led the way. Clonmel Commercials had fine performances from Shane Ryan, Adam Branningan, Ross Slattery, Deckie Nee and the whole full forward line.