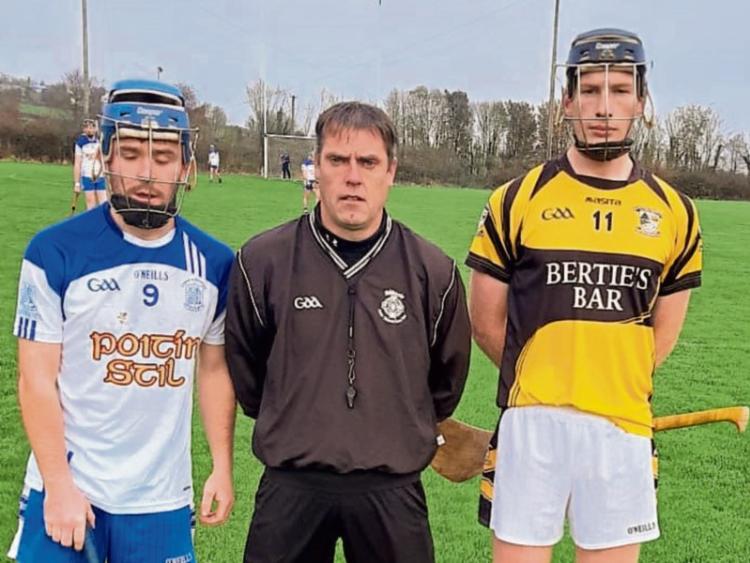 Team captains Tommy Coughlan (Cappawhite Gaels) and Michael McCormack (Kickhams) with referee Mark Jordan before the throw-in for the West U-21 A Championship game at Clonoulty on Sunday last.

Cappawhite Gaels advanced to the semi-final of the O’Dwyer Steel West Under 21A Hurling championship, as a result of their seven point victory over Knockavilla Donaskeigh Kickhams at Clonoulty on Sunday last.

Cappawhite went into this game, knowing that they had to defeat their opposition by at least seven points in order to qualify for the knockout stages. This they did in excellent fashion right from the start, led by scorer in chief, Willie Barry. Except for the opening minute of this game, following a Nathan Ryan point, they were never led and always appeared to be able to dictate proceedings.

Willie Barry got their first goal after four minutes to put them into a five point advantage. Michael McCormack pulled one back for Kickhams and further points from Aaron Browne, Shane Farrell and Ben Ryan had cut the deficit to four by the quarter hour mark. Willie Barry, Pakie Barry and Denis O’Shea kept tacking on the scores for the Combo, before Devon Ryan got two late Kickams points to leave eight between the sides at the break, Cappawhite Gaels 1.12. Kickhams 0.7.

Kickhams needed to get back into this game and they introduced Dan Lonergan for his first game in the competition, having been side-lined due a hand injury. Devon Ryan and Aaron Browne were putting over the points and slowly eating into the Cappawhite Gaels lead. A Lorcan Carr point after thirteen minutes had just two between them and all to play for.

With the pressure now back on the Combo, they introduced Ryan Renehan and Gearoid Ryan to their attack and with almost his first touch of the ball, on 18 minutes, Renehan raced through the Kickhams defence before driving a low ball to the corner of the net, giving Jack Breen no chance. This put their lead back out to five, but Kickhams kept in touch, mainly through Devon Ryan.

With six minutes of normal time remaining David Murphy put over a point for Cappawhite Gaels, to get nearer their seven point winning target. Two minutes later Renehan again got through for a second goal to go eight up. This brought the crowd to their toes as the excitement reached fever pitch. Kickhams put everything into attack in the final minutes and a Devon Ryan point left seven between the sides.

Try as they would, they were unable to further reduce this deficit as the Cappawhite Gaels defence held firm with a place in the semi-final against Cashel this cming weekend their reward.

Clonoulty defeat Cashel to advance to West U21 'A' Hurling Final