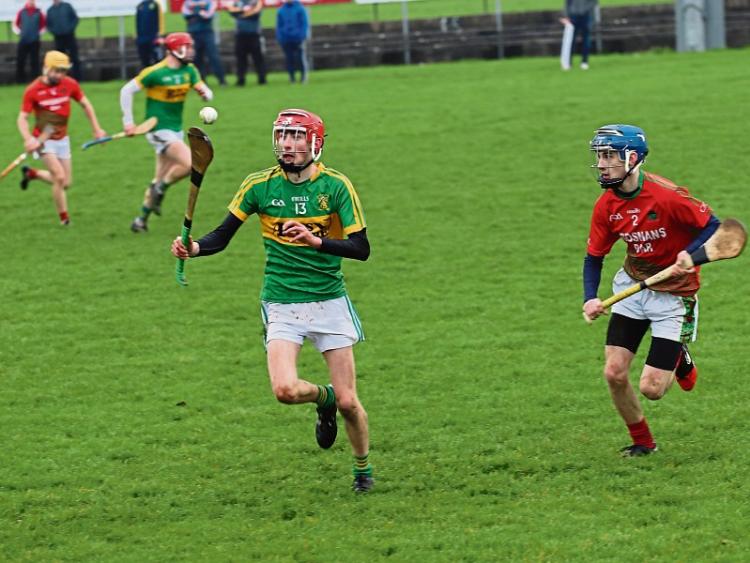 Sean Ryan (Clonoulty/ Rossmore) brings the sliotar under control as Brian Davern (Cashel King Cormacs) prepares to challenge in the West U-21 A Hurling Championship semi-final at New Inn on Sunday.

Defending O’Dwyer Steel West U21A Hurling champions Clonoulty/ Rossmore are through to the final of this year’s competition following victory over Cashel King Cormacs in New Inn on Sunday morning. A strong first half performance from Clonoulty/Rossmore that saw them 11 points up at the break laid the foundation for this victory. While Cashel King Cormacs did rally somewhat in the second half, 1-2 from Clonoulty/Rossmore in the final seven minutes sealed the victory.

Cashel King Cormacs came out in more determined fashion for the second 30 minutes. Jack McGrath got his first score as did Colin Ryan while Daniel Moloney pointed from a 65.

The game then went 11 minutes without a score before Thomas Skeffington cut the deficit to seven points with 13 minutes remaining. Jack Ryan got Clonoulty / Rossmore’s first point of the half in the 20th minute before Conn Bonnar responded at the other end. Clonoulty / Rossmore finished the stronger and when Nicky Mockler pulled on a free that was dropping short it went straight to the net.

The sides traded scores for the remaining few minutes before the final whistle saw Clonoulty/ Rossmore emerge winners on a final score of 1-17 to 0-11.

Cappawhite Gaels into West Under 21 'A' Hurling Semi-Final