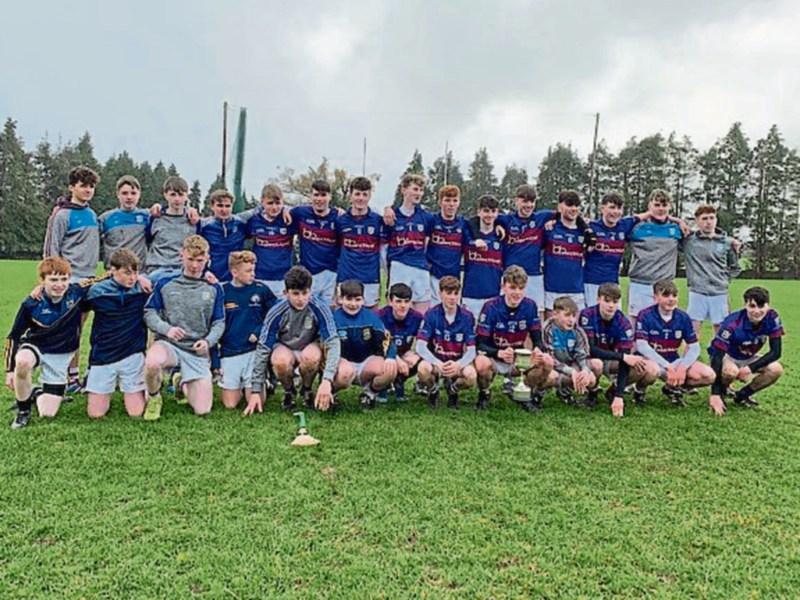 The Presentation Ballingarry side who recently won the Munster U-16.5 D Hurling Championship when defeating Scoil Phól Kilfinane by 1-10 to 1-9 in the final.

Ballingarry started against the strong wind but got a vital score by Ryan Cranitch in the opening minutes of the game. Against the strong wind there was some great defending by Conor O’Brien and Jack Cleere but eventually Scoil Phól made a break and got a crucial goal. Ballingarry then missed two clear cut goal chances which they hoped would not come back to haunt them. Thankfully Ballingarry finished the half strongly with a point by Eoin O’Dywer.

The first half finished 1-5 to Scoil Phól and 0-5  to Ballingarry.

The start of the second half was end to end hurling with Ballingarry scoring a skilful goal finished by Ryan Cranitch. This motivated the Ballingarry boys to push on for the win with Aidan Fitzgerald getting in on the action with a well taken point. Scoil Phól tried to get back into the match but missed two key opportunities for a goal and a point. Ballingarry punished them for that with Vincent D’arcy, Simon Blackmore and Eoin O’Dywer getting a point each. The defending was brave at the end by Michael Ryan as we had to see out a one-point victory.

Top scorer for the day was Vincent D’arcy (four points) and man of the match was Conor O’Brien.

Well done to all of the players and Mr Alan Egan (Manager) and Eoghan Pollard (Mentor).