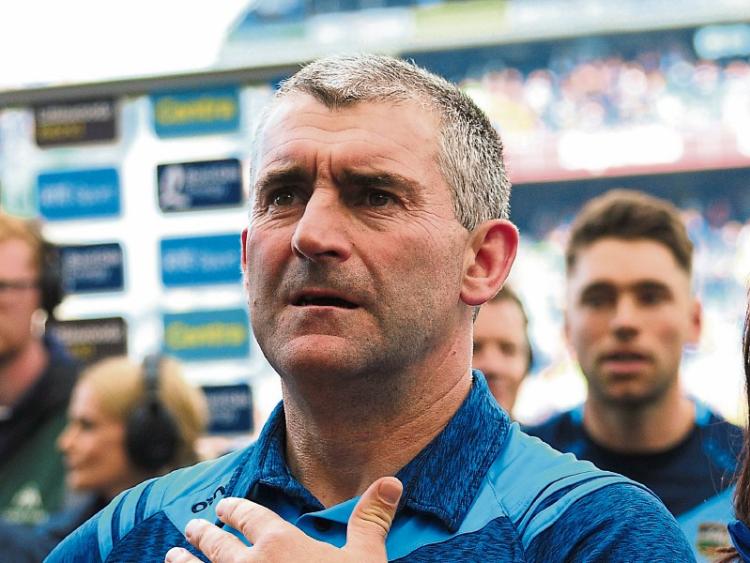 “Some people would be of the view that Limerick are still the best team in Ireland”, says Liam Sheedy

Tipperary hurling manager Liam Sheedy believes that his team needs to find “another gear” this season.

As the side prepares for the opening game of the Allianz National League against Limerick at Semple Stadium on this Saturday (throw-in 5.15), he says “it’s our ultimate belief that we can (find another gear) and that’s what we're going to go after.

“And if we come up short it won’t be for the want of trying. I can honestly tell you that this is a very committed bunch. They’re very grounded in their approach”.

While the initial focus of all counties is on the league, it’s only a stepping stone towards the serious business of the championship, with All-Ireland champions Tipperary bidding to retain the MacCarthy Cup for the first time since 1965.

The discussion about the prospect of his team winning back-to-back All-Irelands is unavoidable at this time of the year but Sheedy says it isn’t occupying his thoughts or those of his players .

“We’re ultimately going to focus on being better in 2020.

“We believe we can be better. We believe there were flashes of what this team can do at various stages throughout the championship (last year) but we never really found that ultimate consistency that we believe is within the team.

“So that’s what we’re going to go after. It’s a long way ahead, we won’t be getting ahead of ourselves.

“This is a very committed  bunch. They really will put their shoulder to the wheel and do everything they possibly can and we’ll take it match by match and performance by performance.

“It’s  a minefield out there, there are some really good teams out there, if you look at the Limericks and the Galways and the other teams.

“The only place I want to be is the one team that has the chance to go and look to do it again but that means we won it last year! If we didn’t win it last year we wouldn’t have this headache!

“For me and for the lads, having been there, we can really go and express ourselves and have a freedom about our play in 2020.

“There were a lot of questions asked about this group (last year), whether they could go and win another one, and ultimately some guys in this group have won three All-Irelands in the last decade.

“They're going into this decade absolutely with a freedom about their play, with an ambition to express themselves and just to be better.

“And once they’re in that place and they keep showing me what they’ve showed in the last three or four training sessions - even though it’s early days - I’ll be a very happy man.

“Because ultimately they’re going to do everything that they can for this county and this jersey.

“They’re just a group that gets on really well together. You watch them and how they interact together when they were on holidays (in New York and Mexico), they were very comfortable in each other’s company.

However one player passed up the chance to enjoy the team holiday, choosing instead to go on a charity mission to East Africa. 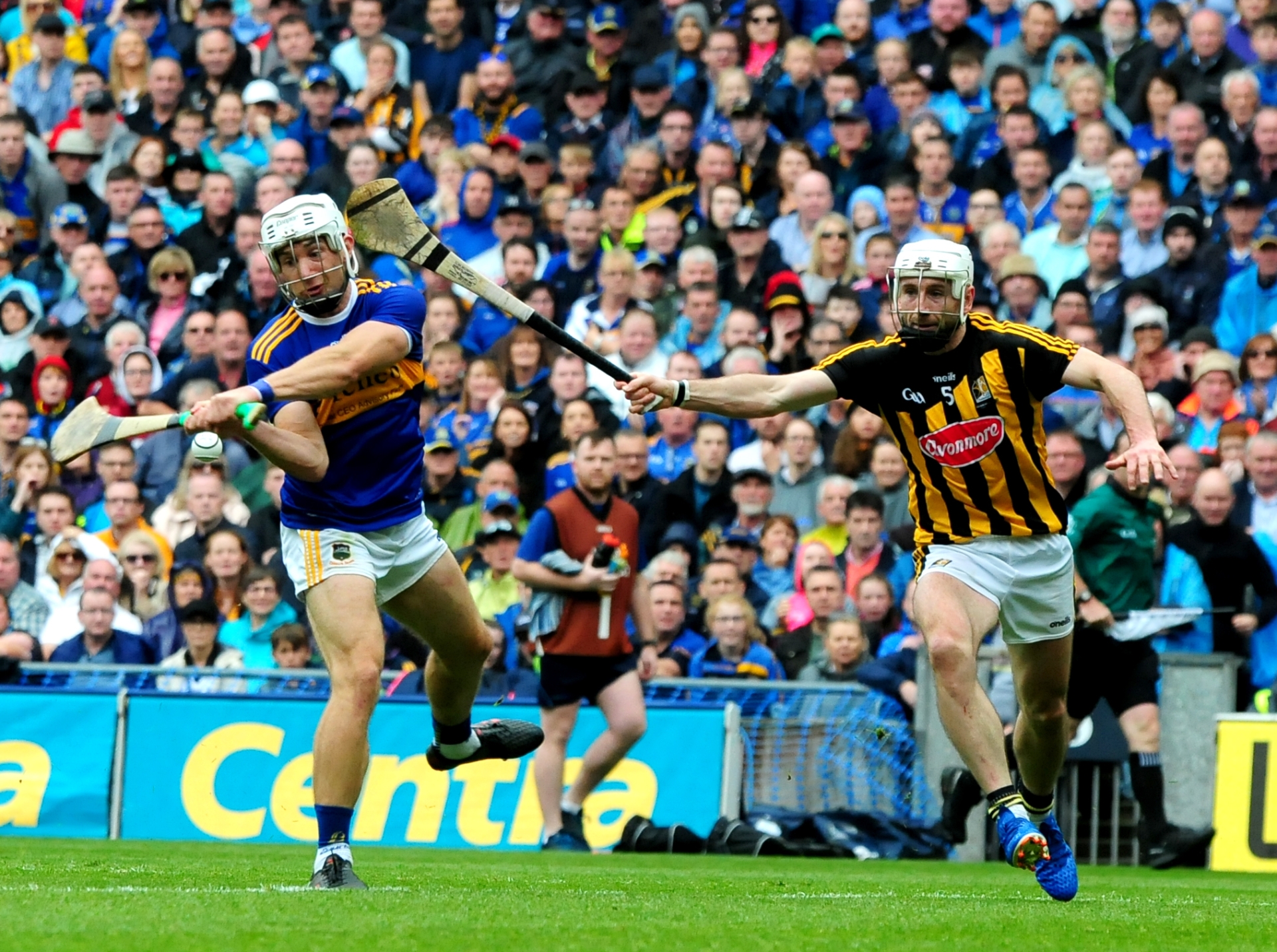 “Niall O’Meara (pictured above scoring against Kilkenny in last year's All-Ireland Final) went and supported the Ray of Sunshine charity in Rwanda, which is for kids that haven’t the bright future to look forward to like we have”, says Liam Sheedy.

“The work that he’s doing is incredible. That shows you the statement from within the group in terms of their connection to what’s going on in other parts of the world.

“There’s a real element of humility and gratitude within this group. So they’re very grounded even though they’ve been successful. They’re very committed to this county and this team.

“For me, sitting here as a manager, I have a backroom team to die for, in terms of the quality of personnel I have around the team. So the team won’t want for anything in terms of their preparation and we will prepare to the best of our ability.

“If that means we’ll come eighth, we come eighth but I can honestly tell you I will have no regrets when this journey finishes because they are committed to giving everything 100%”.

It isn’t a concern to the manager that some of the panel’s most experienced players have a lot of mileage on the clock.

“We saw it last year, there were a lot of lads ready to get the headstones out for some of these players! When we sat here this time last year and when you look at some of the performances of some of the guys in there, with a three (in terms of All-Irelands won) in their number, and look at the way they played.

“I think it's just about managing energy and managing the mileage but these guys have finely-tuned engines and are far from being a lost ticket. The leadership and energy they give, the way they train.. they’re working as hard as any of the panel and they know they might be at the opposite end of the careers of some of the younger guys, but they are hell bent on continuing.

“They like what they got in 2019 and they want to make sure they give themselves every chance to try and taste a little bit more success”. 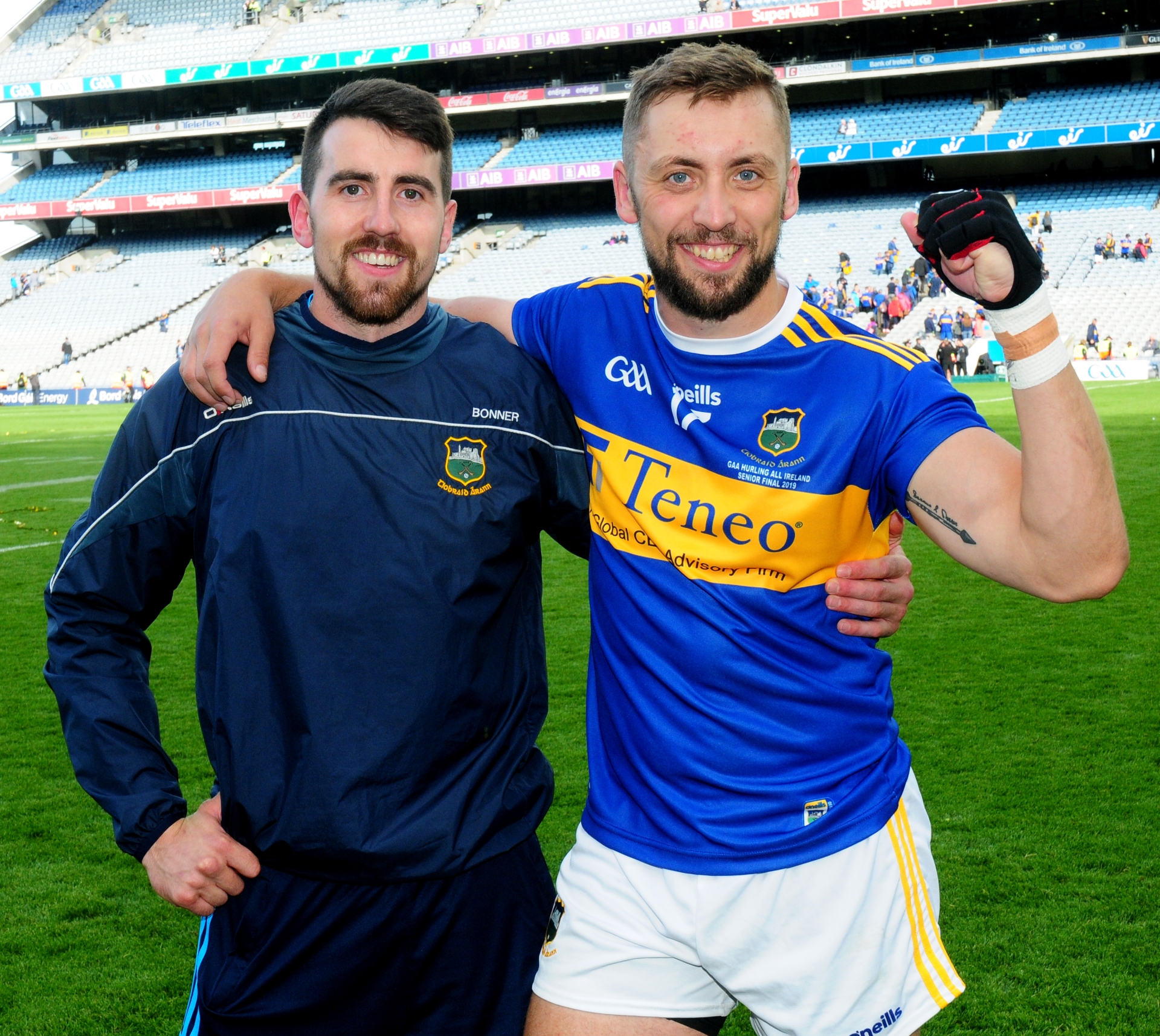 He expects Bonner Maher (pictured above, left, with James Barry) who tore his cruciate ligament in the round robin championship game against Limerick last summer, to rejoin the panel in the middle of next month, which he says will be a big lift for everyone.

“You won’t be surprised to hear that Bonner is ahead of schedule in terms of his rehab. Everything in life that he does he’s ahead of schedule! It’s great to see him back, he’s working really hard at the side of the pitch every night”.

Liam Sheedy says it’s only to be expected that his team are “a little bit behind the curve” in terms of their preparations for the league.

“Limerick will be a serious baptism of fire for the start of league but for us that’s wonderful. If we want a benchmark for where we’re at in the middle of January, what better team to ask that question of you than Limerick, who are the league and Munster champions.

“Some people would be of the view that they’re still the best team in Ireland”.

He has also appealed to the Tipperary public to get behind the team.

“I certainly felt in the earlier rounds of the league last year that we (supporters) didn’t really come in behind the team, and the Wexford match (the All-Ireland semi-final) last year was the moment where we won over the people of Tipperary.

“I would ask them now they’ve come on board and they’ve really come in behind the team in the latter stages of 2019 that they would stay with us in 2020.

“Because this is a team worth following”.