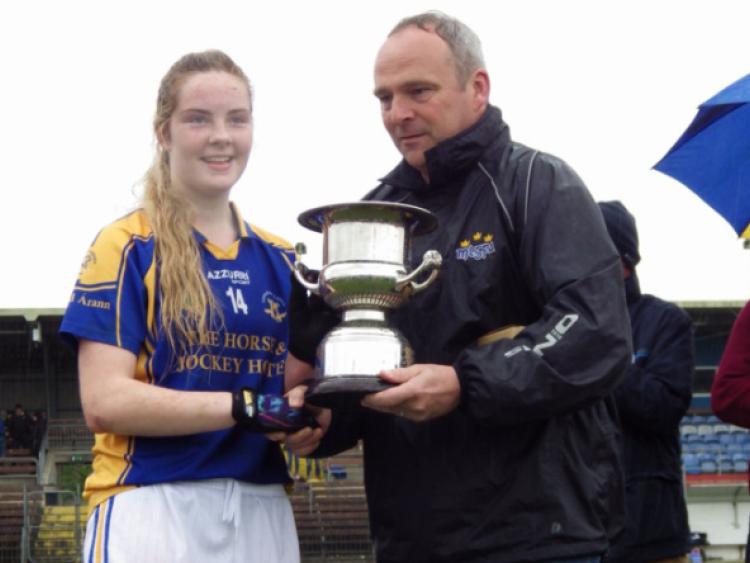 On qualifying for the Munster Minor B Final with Waterford as their opponents, Tipperary supporters were promised a thrilling final and they were not let down. These two counties leave no stone unturned when they meet at any level and on Sunday last in a damp Fraher Field, Dungarvan it was no different.

On qualifying for the Munster Minor B Final with Waterford as their opponents, Tipperary supporters were promised a thrilling final and they were not let down. These two counties leave no stone unturned when they meet at any level and on Sunday last in a damp Fraher Field, Dungarvan it was no different.

Tipperary captain Aisling McCarthy opened the scoring in the first four minutes with a point followed by a goal. In the fifth minute Aoibhe O’Shea added a point before Aisling provided another point.

Tipperary looked to be dominating the game but in the fifteenth minute Waterford captain Mairead Power opened their account with a point. Tipperary’s Aisling McCarthy replied with a point of her own.

Waterford had settled into the game and were applying pressure on Tipperary which resulted in Shauna Dunphy and Lauren McGregor adding their names to the score board with a point each. Tipperary’s Lauren Fitzpatrick kept the deficit between the two teams at four points when she made a fantastic save in the 24thminute. Tipperary’s Aishling Moloney and Aisling McCarthy added two more points to Waterford’s Lauren McGregor point which left Tipperary in front by 5 points at the interval, 1-6 to 0-4.

Waterford came more in to the game after half-time with a Shauna Dunphy point beginning a sequence of scores which saw the home side scoring 5 of the first 7 scores of the half to leave just 2 points between the teams heading in to the final quarter.

The next score was going to be crucial and when Aishling Moloney scored a goal in the 49th minute followed by a quick point, the Tipperary lead was back up to 6 points.

Tipperary substitute Caoimhe Condon added a further point with her first touch and though the sides traded points in the final stages, Tipperary ran out 7 point winners and were crowned Munster B Champions.

An All Ireland Semi Final awaits Tipperary on Saturday July 19 against the Ulster representatives (Armagh or Donegal) which will be decided on May 25.

Congratulations to Aisling McCarthy who received the Player of the Match.

Tipperary Ladies Football U14 team travelled to Coralstown/Kinnegad GAA Club, Kinnegad, for the All Ireland Ladies Football U14 Blitz. An early start was required as their first game was against Clare at 10.30am. Tipperary were no strangers to Clare as they met in the Munster Championship but on this occasion Tipperary won 4-1 to 1-0. In their second game, Tipperary defeated Donegal by 2-1 to 1-0. Tipperary had to wait until 12.30pm before their next game when they overcame Laois on a score line of 2-0 to 1-2. The final game in the rounds was against Wexford, who proved to be too strong for Tipperary.

Due to other results not going Tipperary’s way, Tipperary tied with Laois for second place resulting in a point penalty shoot-out to decide who progressed. Tipperary scored one point to Laois’s two points. Tipperary had a fantastic day of football but unfortunately their day finished there.

Tipperary Ladies Football is starting to organise their 2014 Development Squads.  It is hoped to commence the following squads on these dates - U12 Academy Start (July 26th/27th); U13 Development Squad Start (Aug 9th/10th); U15 Development Squat Start (Aug 16th/17th). Can anyone who is interested please email to development@tipperaryladiesfootball.ie. -Your name and club, which group you are interested in and what team you are currently training or what teams you have trained to.