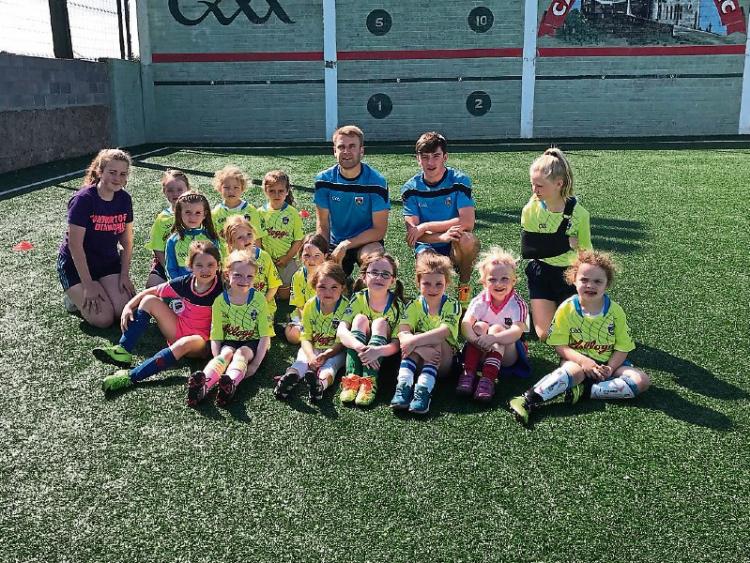 Over 190 kids, boys and girls, aged from 5 years up to 13 descended on Leahy Park last week to take part in Cashel King Cormac's most successful camp yet.

Right through from Monday to Friday each participant was coached in hurling/camogie and football with a fun theme integrated at all times.

The buzz around Leahy Park was second to none with everyone involved having a fantastic time. A word of thanks to Kevin Halley from the Tipperary county board and his band of coaches for their time and expertise and to our own club volunteers also.

Finally to Eileen our Cul Camp co ordinator a Massive thanks Eileen for the enormous work you did in the run up to the Camp and indeed during the week itself. You do tremendous work and the club is deeply indebted to you. Congratulations on the biggest and best Cul Camp yet, exceptional, well done once again.

Our Junior B Hurlers made it back to back victories with a late victory over Arravale Rovers. This wasn't Cashel's most polished display and with minutes to play it looked like the points were heading back to Tipp town.

However one late drive triggered by a superb goal from Brian Fitzpatrick put Cashel in pole position deep into injury time. Thomas Skeffington added a point and Cashel had pulled victory from the jaws of defeat with a late rally. Considering the panel are down a few players due to injury this was a decent win with some of the younger players really stepping up. A win over Cappawhite this coming Friday will guarantee a place in the knockout stages so hopefully the lads can pull out another performance. On the night best for Adam Kennedy, John Gaffney, Brian Davern, Paddy Morrissey, Alan Cummins, Thomas Skeffington, while Jamie O'Keeffe had a big influence on proceedings when introduced. Full time score Cashel KC 1-16 Arravale Rovers 2-10

Cashel's Minors put on a fine display to easily dispose of Golden/Galtee in round 2 of the West Minor A hurling. This was an understrength Cashel side with many players unavailable due to holidays but this had little impact on the manner of the win. After holding a commanding halftime advantage of 2-7 to 0-3 the second half was all one way traffic and Cashel quickly put the game to bed. Jack McGrath spearheaded the scoring stakes bragging an impressive 3-6. All over the Pitch Cashel dominated. Eoghan Connolly was exceptional at centre back with Jack Browne Corbett also to the fore. Jamie O Keeffe, Thomas Skeffington, Daniel Moloney and Aaron Moloney too had good moments. Fearghail O Donoghue capped a fine display with four well taken points. No one will get too carried away however with this victory as tougher games lie ahead in the not to distant future. Full time score Cashel KC 5-17 Golden Galtee 0-7.