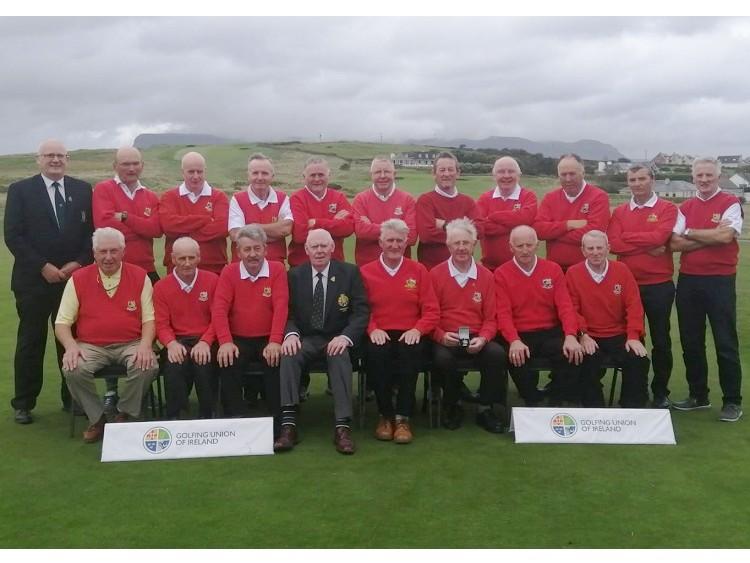 A historic Golf Union of Ireland (GUI) interclub 4 province competition exclusively for men aged 55 and over, Templemore’s Team Captain Seanie Gleeson was thrilled to have a very competitive element of players for this age profile. Having already won over 5 Munster prestigious Clubs, Tipperary, Ballykisteen, Dungarvin, West Waterford, Limerick, qualified Templemore to the Munster finals on Sunday, September 8 at Cork Golf Club against East Cork Golf Club with a decisive win of 3.5 to 1.5 continued to the All-Ireland semi final on Thursday, September 26 against Woodenbridge Golf Club in Rosses Point Golf Club, Sligo. Woodenbridge played some great golf that was a challenge of the men from Templemore but the Templemore side won decisively with a 3.5 to 1.5 victory. Seamus Bourke and Liam Daly, a pairing unbeaten throughout the campaign, put the first point on the board for Templemore with a 2&1 win. Their second point came in the bottom match where Denis Maher and Padraig Moloney were comprehensive victors by 5&4. Woodenbridge rallied, beating Joe O’Connor and Tom Kenny by 1 hole but moments later Templemore sealed the win when Denis Tuohy and Joe Fahy were victorious with a 2&1 win. The nine-hole Templemore course in rural Tipperary was applauded by the prestigious Woodenbridge Golf Club and Templemore’s team Captain Seanie Gleeson spoke highly of his team commitment, endurance and not faltering to the weather elements. It is a great achievement for a small club like Templemore to have reached the All-Ireland final in this inaugural National prestigious tournament. The Connaught, Gort Golf Club defeated the Ulster side Loughgall by 3.5 to 1.5.

The all-Ireland final stage was now set for Friday, September 27 in Rosses Point Golf Club between Templemore and Gort Golf Club. The weather conditions were seriously inclement intermittently, players experienced the four seasons in a matter of hours across the famous Rosses Point links. The drama began. It was so intensive and captivating that it has to be a record for this GUI All Ireland final especially as it was the first Fred Perry competition on his home course. A total of 96 holes were played to decide the winners. At one stage mid-way through the back nine the scene was set for Templemore to lay claim to the title but the resilience of the Gort side continued. A battling performance from Gort against Seamus Bourke and Liam Daly gave them the first point of the day, coming on the 19th green. The second point for Gort came in the third match sealed a win by 1 hole against Tom McGrath and Bertie Keane. The drama was to intensify. Templemore were looking comfortable in the last two matches and would go on to win the bottom match by 1 hole. Denis Maher and Padraig Moloney taken all the way to the last hole to win. The fourth match, Templemore's Denis Tuohy and Joe Fahy climbed to the summit mountain green (their 20th) and halved. Gort needed to win just one of the remaining two matches to seal the win. It fell to Gort v Ambrose Purcell & Mattie Bourke who lost on the marathon 21st hole, and the Fred Perry Trophy went to Gort 3.5 over 1.5 for Templemore. Final result: Seamus Bourke & Liam Daly lost on the 19th; Ambrose Purcell & Mattie Bourke lost on the 21st; T McGrath & B Keane lost on the 1 hole; Dennis Tuohy & Joe Fahy halved; Dennis Maher & Padraigh Moloney won 1 hole.
Templemore Team Captain Seanie Gleeson congratulated Gort on their win and emphasized that “Golf is one sport that you can play until you’re 90 years + and you can be competitive. To have competitions like the Fred Perry Trophy for any golf club is tremendous, for older players and most members now retiring at 60 and they are out playing golf it’s tremendous to be able to do that.” A fantastic victory in defeat.

Gort’s Team Captain Robbie Killeen congratulated Templemore and lauded that Templemore could have won the game on the 19th, 20th. It was hard luck on Templemore. “It was a thriller, I didn't think we were going to win it. It was brilliant. I think it’s great for a Connacht club to have won the Fred Perry Trophy seeing as he was from Connacht”.
“Fred was a one off,” says former GUI President John Moloughney. “He was committed to golf and the ethos of the game. He was a father figure in Irish golf.”
The inaugural All-Ireland Finals in Rosses Point was Fred Perry's home club in County Sligo, where he served the Connacht Branch with distinction for 42 years on the West of Ireland Championship Committee before his death in March 2018.
A historical distinction performance by Templemore Golf Club.

LMC President Prize
It is an honor to have a Templemore member as President of the LMC Mr. Phil Ryan. His LMC President Prize date will be on Saturday, October 5 in Templemore which will have in excess of 100 members from various clubs taking part. We wish Phil all the success with the event.

Cadets
For 8 to 18 year olds. A special practice range is now in place for the Cadets. Contact Pat O’Connell. 087-9205821 Club Juvenile Liaison Officer. Come along if you are interested in playing Golf.
Training will continue, on Saturdays from 1 to 2pm. Thanks for all the support from parents and volunteers and look forward to continuing throughout the year.