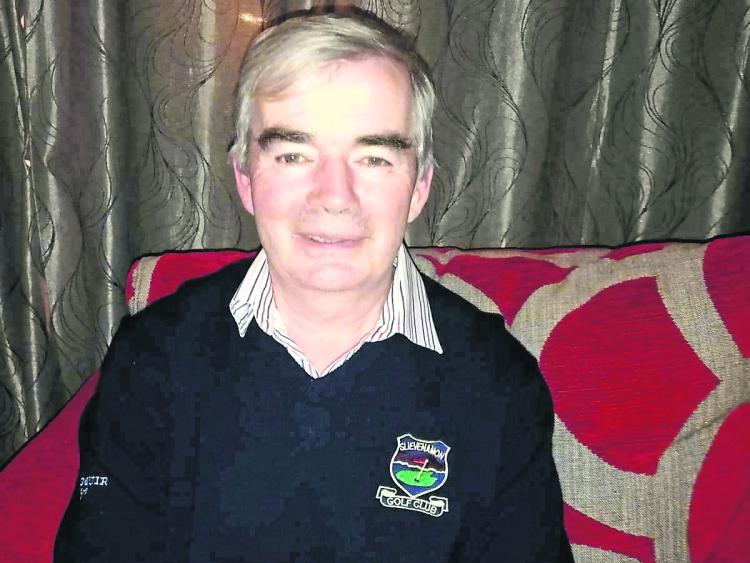 Sean Aylward carries the honour of being Gents Captain at Slievenamon Golf Club for 2021 and following the stop-go nature of golf in 2020 - with a permanent “fore” to the sport called on no less than three occasions - Sean is now hoping that golf is back for good from Monday next, April 26.
According to Sean, “golf like most other sports and pastimes has been badly hit due to Covid-19 and little did we think when news of the virus broke that over a year later we would be still in lockdown. What happens on the other side of the world usually only commands a couple of days conversation but alas that was not the case this time round and we have now nearly become used to restrictions,” he said.
“It’s hard to credit,” he continued, “that all golf stopped on March 24 until May 18, then from October 22 to December 1 and again - and hopefully for the last time - from December 22 to what we hope will be a permanent restart on Monday next.”
This time of year, with the days lengthening and the sun shining more is always a wake-up call to golfers - especially those who don’t savour winter golf too much. And if golfers, either way, might not have been too pushed about playing in the poor weather of the first months of this year the appeal is all the greater now, with the better conditions.
“The early part of 2021 was wet and frosty and golf would have been restricted due to weather conditions, but now with the sun shining and milder conditions all golfers are chomping at the bit to get back on to the course. Golfers are now getting ready in earnest, cleaning golf equipment (finding clubs, shoes, golf cart, etc.), all mad for action once more,” he said.
You could sense from conversation with Sean, an immensely proud Killusty man, that like all golfers he too is really happy to have golf back in his weekly routine.
THE COMPETITIVE EDGE
“What people missed most when golf was out of bounds was the competitive edge which most golfers possess, no matter what their ability, age or handicap. During lockdown we all walked more and did some gardening with the occasional shopping trip a big treat. It’s amazing how people can cope when they have to,” he added.
“When we do get back to playing golf it will be run strictly by the rules - book your time, arrive, play and go home, no tea or coffee afterwards, etc. It will still be very different from Monday next with restrictions and Covid guidelines still in operation. We will allow only two players to play together unless from same household,” stressed Sean.
The golf captains of 2021, up and down the country, including County Tipperary’s 11 golf clubs, have pulled the short straw somewhat with the first quarter of the year now almost gone without a ball being shanked in anger!
“It could not haven been foreseen that the captain’s role in 2020/2021 would be so restricted and there was not a lot that could be done about that. We cannot plan fixtures or even the ceremonial drive-ins until the situation allows, although provisional fixtures are in place ready to go. We hope that some form of drive-in can be arranged soon in line with Government guidelines.
“Committee meetings are held on Zoom and teams have been entered in the Pierce Purcell and Jimmy Bruen inter-club competitions. We are lucky to have a good working committee, which makes the Captains’ task - mine and Teresa’s - easier,” added Sean.
Sean, who recently retired after a lifetime of dedicated service to the Sporting Press in Clonmel, felt a little put out that golf, despite the vast expanse of the courses, was excluded from the list of sports allowed to resume earlier.
He explained: “Golfers were of the opinion that golf should have been back earlier as two people playing out in the open seems much safer than lots of people going shopping. Nonetheless the GUI were adamant that all restrictions were adhered to. But then again it was great to be able to watch soccer, rugby and horse racing with the great local successes at Cheltenham and Aintree. It will be great when we can once again attend live at these fixtures,” added Sean, a great horse racing and greyhound racing supporter down the years, as well as being a lifetime pillar of Killusty Football Club in their day.
Slievenamon Golf Club has a newly redesigned course and the club captain was quick to sell it as a venue for an enjoyable round of golf, when green fees and open competition resume later.
“Since taking over at Slievenamon Golf Club the new owners Brian Powell and Mary Hand have put a lot of planning and work into improving the course. All the greens were sanded, new tee boxes were built and the 2nd, 8th and 17th holes were lengthened. During lockdown course maintenance continued under Paul Kenny and his team and I have no doubt that from Monday next we will all be returning to a pristine course,” boasted Sean.
“Playing golf and being part of club is always a great way to keep fit and make new friends. Indeed, after the first lockdown membership increased at Slievenamon Golf Club. We have a great deal for new members and also for distance members,” added Sean, extending an invitation to one and all, perhaps later in the summer, to come along to Lisronagh and enjoy a round of golf with the iconic Slievenamon as a unique background.