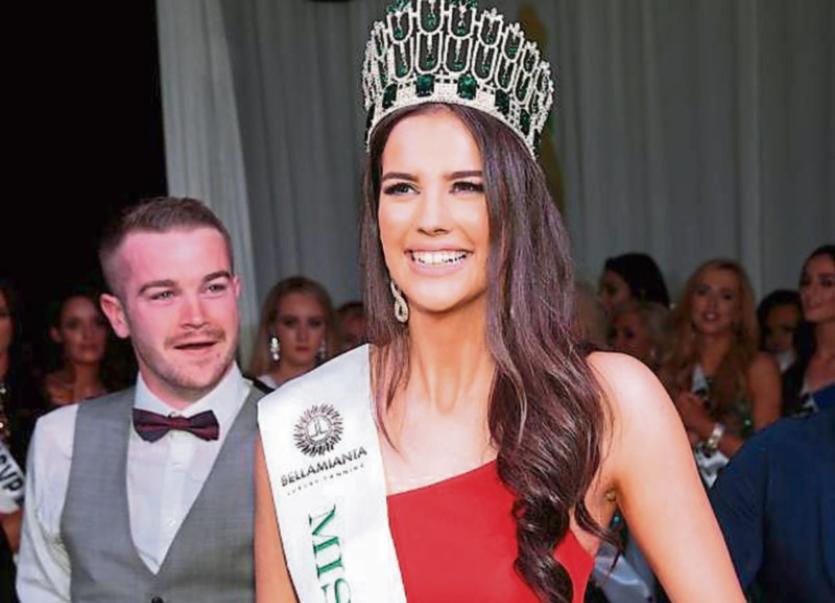 Portroe was cheering for one of its own on Friday night as Niamh Kennedy was crowned Miss Ireland at a star-studded ceremony in Dublin’s Crowne Plaza Hotel.

Tears flowed all round as Niamh came out on top, beating off competition from 33 other contestants to claim the coveted tiara. Now she advances towards the Miss World finals in Washington D.C. on December 19th, with a busy schedule ahead.

Niamh won the Miss Tipperary title back in May, and has been involved in charity work since then. Taking home the silverware on Friday night was the icing on the cake.

But the celebrations were bittersweet, as Niamh remembered her late father Liam, who passed away five years ago from Alzheimers. When her name was called out as the winner, Niamh says she couldn’t believe her ears. “Absolutely amazing,” she told the Tipperary Star. “I just went into shock and started bawling crying. I don’t think I’ll ever get over it.

Niamh, who is a classically trained ballerina, now works in the hospitality industry. Niamh dedicated her victory to the memory of her late father, to whom she was so close. She said she could nearly feel his presence on stage. “I was really really excited by the whole experience. I think he really was there. I was so so close to him. He would have been the first person up on stage with me.

“I think he would have been so proud to see me that I’m doing well and following my dreams, and doing everything that I want. It’s been really enjoyable.”

Niamh’s mother Catherine, and brother Colm, joined her up on stage. “Definitely they rocked the place. From Tipperary, they know how to shout and they did a great job.”

Niamh paid tribute to her former teachers and her ballerina coach, Aishling O’Doherty in Nenagh, who taught her for ten years, beginning from the age of 5. Niamh attended Scoil Mhuire, Portroe N.S. and St Mary’s Secondary School in Nenagh.

Niamh is now all set for Washington D.C., where she will represent Ireland in the Miss World contest. “I’m so excited. I’m really looking forward to it. It’s going to be an amazing experience no matter what happens.” The contestants will be put through their paces, singing, dancing and performing.

As part of her prize, Niamh gets her own photo shoot for her Miss World profile page, along with being signed up with the Andrea Roche Modelling Agency. Niamh says she made great friends with the 33 other Miss Ireland contestants. “I couldn’t have met better girls. I’m very happy that I got to share it with them”.

Niamh wants to thank organisers Brendan Scully and Sean Montague. Niamh will face stiff competition in the Miss World titles, and hopes to perform either a traditional Irish dance or ballet routine for the Finals. “I really don’t know how I’ll do. I haven’t met any of the other candidates. As long as I’m true to myself, I’ll be happy with however I do.”

The whole experience can really open doors for contestants, and Niamh says she’d love to try a career in modelling, following in the footsteps of fellow Tipperary woman Andrea Roche. “I’d absolutely love it.”