Tipp Art For All exhibition will be launched on Friday night 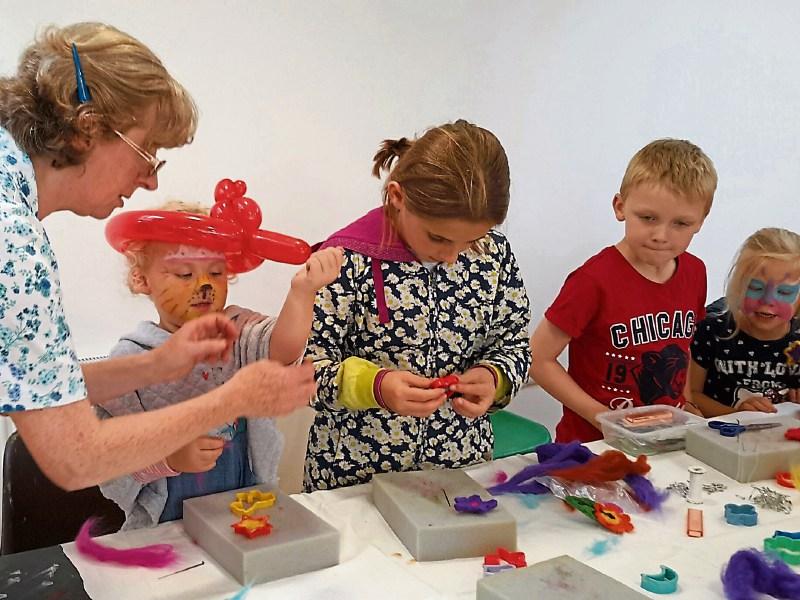 In spite of the bad weather the South Tipperary Arts Centre’s 20th birthday celebrations were enjoyed by approximately 150 people of all ages who turned up throughout the day.

Fortunately the rain eventually eased off and from 1. 30pm in Clonmel Courthouse a group of young musicians from Powerstown/Lisronagh Comhaltas Ceoltoiri Eireann played their hearts out to a very appreciative audience for an hour.

The acoustics were just perfect for the traditional musicians.

The tutors set up their workshops in the studio and gallery of the Arts Centre in Nelson Street. Magician and balloon man Reco performed shows for the younger children while the two great face painters, Aine and Connie painted lots of faces.

Thanks are extended to the arts and crafts tutors who worked without a break for up to five hours - Mary B. Mackey, oil painting; Marie Crean, patchwork; Lily O’ Donnell, calligraphy; Lesley Lynch, felting; Sarah Delahunty, printing; Elke and Grainne Wison, paper craft and Tony Crosse and Adrian Cooke, drawing.

Over in the courthouse from 3. 45pm The Cedartowns played brilliantly, as usual, for nearly two hours, to great acclaim.

The Arts Centre staff were delighted that so many enjoyed the five hours of celebrations in Nelson Street. The delicious finger food was set out in the Cluain gym, courtesy of Ronnie Corbett, manager, and was supplied by Cian from Cluain, Pat from Whelan’s Butchers, Martin from Tesco’s, TJ from Lyons Takeaway and Sinead from Quimby’s, to whom the Arts Centre is most grateful.

Thanks are also extended to Mary B. and Patricia, along with voluntary manager Maureen who put up the road barriers at 7am on Saturday morning in atrocious conditions; to the County Council; the media and all the volunteers who helped make the family day such a great success.

The current exhibition in the Arts Centre is Tipp Art for All, an exhibition of 130 artworks by 70 Tipperary artists and which which has been organised in conjunction with the 20th birthday celebrations.

It will be officially launched at the Arts Centre at 7pm this Friday night.

Admission to the gallery is free.

Information on all the classes for children, as well as the new beginners Adult Art Classes and computer and photoshop classes is now available from the reception in the Arts Centre, Nelson Street, Clonmel.

Ring 052-6127877, Tuesday to Friday through lunch and Saturday from 10am to 2pm or e-mail info@southtippartscentre.ie