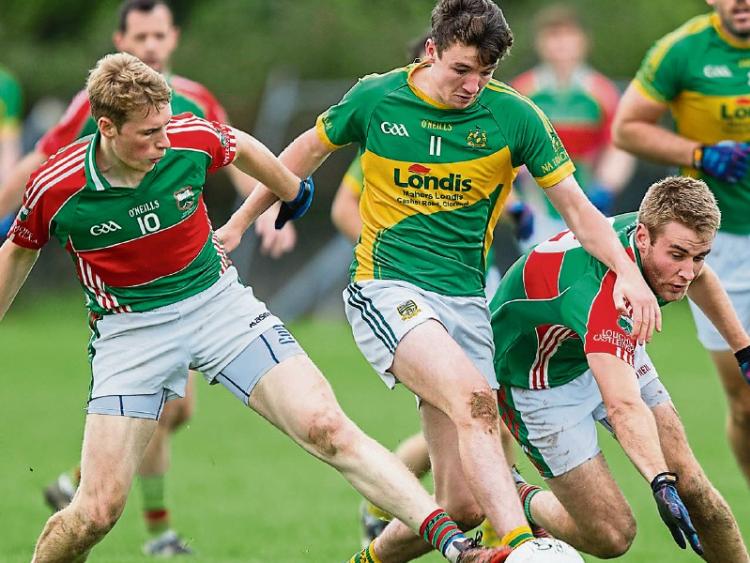 All Ireland winning Tipperary senior hurler and Tipperary Person of the Year Noel McGrath inspired Loughmore/Castleiney to a thrilling win over Clonmel Commercials in the County SFC semi-final at Boherlahan on Sunday.

McGrath was supreme at midfield as he helped the Mid side drive at Commercials in waves and allowed the champions no time to settle.

Defeat means that the Clonmel side surrender their county and Munster titles. They gave it everything in a battling display but on the day met a better side.

However they represented Tipperary with distinction on the provincial and  national stage and were worthy ambassadors  at club level in a great year for Tipperary football.

But it was also a great year for Tipperary hurling and on a never to be forgotten day in Croke Park last month, the McGrath brothers Noel, John and Brian returned home with three All Ireland medals.

On Sunday they showed they are equally accomplishsed footballers as they contributed massively to the win.

Cousin Liam McGrath, who captained Tipperary to the All Ireland minor football title in 2011, was another huge influence before his game was ended with a black card.

Loughmore are renowned for their battling spirit and that was evident in buckets. They knew the danger that Commercials presented in players such as All Star nominee Michael Quinlivan, Jack Kennedy, Jason Lonergan and All Ireland hurling medalist Seamus Kennedy and they were determined not to allow them display their skills.

They cut out the Clonmel attacks at source and never relented an inch.

A point inside ten seconds from Eoin Fitzgerald after a great run from Quinlivan set Commercials on their way and when Quinlivan added another it looked as if the champions were about to stamp their authority.

But Loughmore settled and points from Evan Sweeney and a Liam McGrath free had them level within eight minutes and another McGrath free put them ahead for the first time in the 19th minute. Their lead should have been greater but for some poor wides from play and placed balls.

Noel McGrath was proving to be an immense influence for Loughmore and their dominance was rewarded with another Liam McGrath free extended the lead to two.

Commercials needed a score and they got it after 26 minutes - their first in over twenty minutes - from Jason Lonergan.

But back came Loughmore and great work from Noel and John McGrath set up Cian Hennessy for a lovely point. On the stroke of half time Quinlivan pointed a 45 to make it  0-5 to 0-4 at the break.

Commercials enjoyed another blistering start to the second half when Quinlivan equalised in twenty seconds and put the champions ahead again within a minute.

But Loughmore were not going to allow Clonmel pull clear and when Liam McGrath was fouled, he pointed the free himself to make it 0-6 each.Back came Commercials and Jack Kennedy restored the lead and as the game became heated, there were black cards for Ciaran McGrath (Loughmore) and Kevin Harney (Commercials).

Nine minutes into the half Liam McGrath levelled from play from a Noel McGrath pass and then defender Tomas McGrath came forward to give them the lead. When Liam McGrath was shown a black card it could have been a huge blow for Loughmore but they weathered the storm to finish the stronger.

There were groans from the Commercials supporters as Quinlivan missed a kickable free and Loughmore made them pay with a brilliant point from the outside of the right boot from Cian Hennessy to go two up with running out, 0-9 to 0-7.

Commercials needed a goal but all they could manage was a final point from a Quinlivan free. Loughmore withstood everything Commercials threw at them in the closing minutes to seal a well deserved victory.

They now meet Moyle Rovers in the county final in Cashel next Sunday and on this performance will go into the decider as favourites.