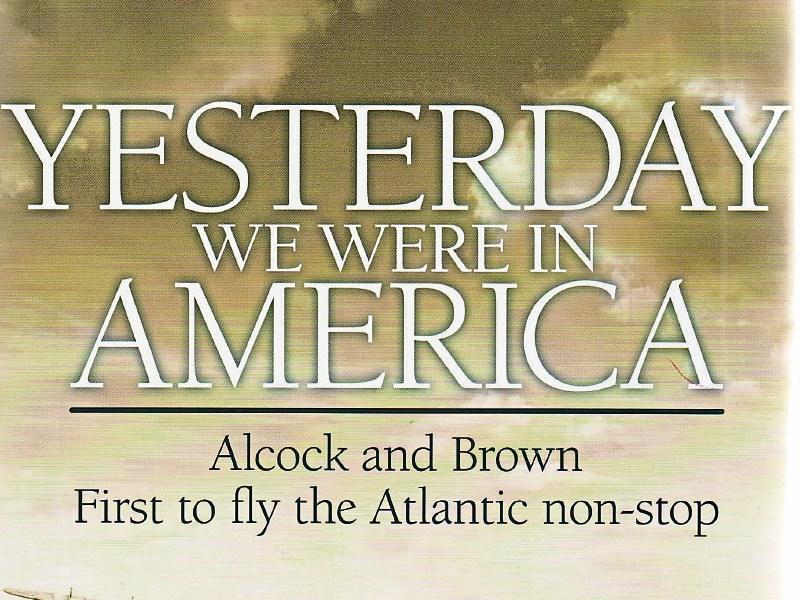 Toomevara author Brendan Lynch is appealing to Irish filmmakers to step forward, after a US company’s failure to progress a proposed movie on John Alcock and Arthur Whitten Brown’s first non-stop 1919 Atlantic flight from St John’s, Newfoundland to Clifden.

The film was to be based on Mr Lynch’s account of the pioneering flight, Yesterday We Were in America, which was praised by authors Len Deighton and Colum McCann.

“I signed a holding agreement with a New York company, who initially informed of their progress with screenwriters and producers. But they have now gone cold and I hope an Irish filmmaker may step in to record the dramatic flight which put Ireland on the world aviation map,” he said.

The author spent two years researching his book on both sides of the Atlantic.

He met the late Steve Fossett, who replicated the flight in July 2005, and also Clifden’s Harry Sullivan, who witnessed Alcock and Brown’s June 1919 arrival.

“With the 2019 centenary looming, planning would have to start soon, if a film were to be made,” said Brendan.

Alcock and Brown survived continuous cloud, snow and ice and a near-fatal stall in their open-cockpit Vickers Vimy, as well as a damaged exhaust and a non-functioning wireless, before landing at Derrygimla, near Clifden on Sunday morning, June 15, 1919.

Mr Lynch insisted that the all-action John Alcock and his introspective navigator, Arthur Whitten Brown, were the two of the world’s most successful and, sadly, most neglected aviation pioneers. Their 16-hour flight was probably the most significant and dramatic aviation feat, after the Wright Brothers’ early efforts.

“It marked the first crossing of an ocean and, at 1,880 miles, the longest distance ever flown up to that time. Though the Atlantic was not flown again until Charles Lindbergh’s 1927 crossing, it was Alcock and Brown who pioneered the route we all take for granted today,” he said.

With Failte Ireland’s assistance, a boardwalk was recently erected on the landing site to make the area more accessible to aviation fans and those interested in the early Marconi station which once stood there.

“A film on this great flight could also boost the number of transatlantic visitors to Ireland,” maintained Mr Lynch.

Brendan Lynch was born in 1937, and is the son of late Garda sergeant Patrick Lynch and former schoolteacher Siobhan Lynch.

After a year in St Flannan’s College, Brendan studied at Nenagh CBS, where his teachers, Bill Small and Rodney Bent, inculcated a love of literature and the written word. His first job was with CIE in their Thurles office.