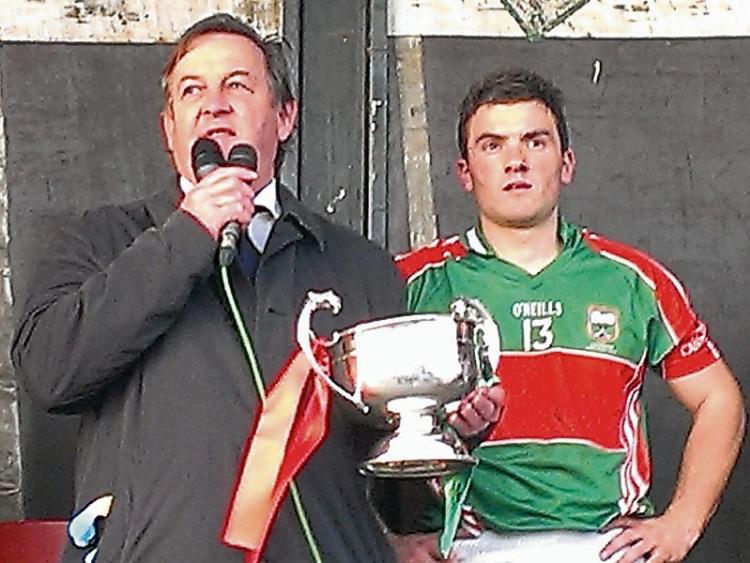 Loughmore/Castleiney are champions of Tipperary football for the third time in four years following their victory over Moyle Rovers in today’s county final played in Cashel.

The Mid side, captained by Liam McGrath, are fully deserving of this latest success, having beaten both of last year’s finalists, Clonmel Commercials and Moyle Rovers, on consecutive Sundays.

Today’s decider won’t go down in the history books as a classic final by any means but Loughmore won’t be too concerned about that. They came to get their hands back on the O’Dwyer Cup and at no stage of the game did they look like being denied that by a Rovers side that played second fiddle all day.

Favourites beforehand after their one point win over Munster champions Commercials the previous Sunday, Loughmore, as expected, took the game by the scruff of the neck and after Moyle Rovers had missed a couple of early chances the Mid boys got on top.

Early points for Loughmore from Noel and Aidan McGrath put them ahead but they also had two early goal chances from Noel McGrath and John Ryan as Rovers struggled with their intensity. The Powerstown/Lisronagh side weren’t helping themselves though with three bad wides inside the first 10 minutes coupled with the loss through injury of wing-back Tadgh Fitzgerald after fielding magnificently in the middle of the park.

After ‘Man of the Match’ Cian Hennessy put his side three up, Stephen Quirke eventually got his side on the scoreboard from a '45' in the 12th minute.

Joe Hennessy with a superb point out on the right for Loughmore was matched by a Liam Boland point, Rovers' only score from play in the opening period. And when Stephen Quirke made it 4-3 for Rovers with a free on 26 minutes it seemed the South Tipp side were doing well for themselves considering Loughmore seemed more dominant overall.

Suddenly the game exploded to life when substitute Dara Ryan took a pass from Liam Boland and finished brilliantly past Dominic Brennan for an unlikely 1-3 to 0-4 lead to Rovers as half-time approached.

But it is often said in sport that the most likely time to concede a goal is after scoring one and almost from the kick-out Cian Hennessy finished off a great Loughmore move when beating Ian Browne, although the Rovers keeper did get a touch to it. 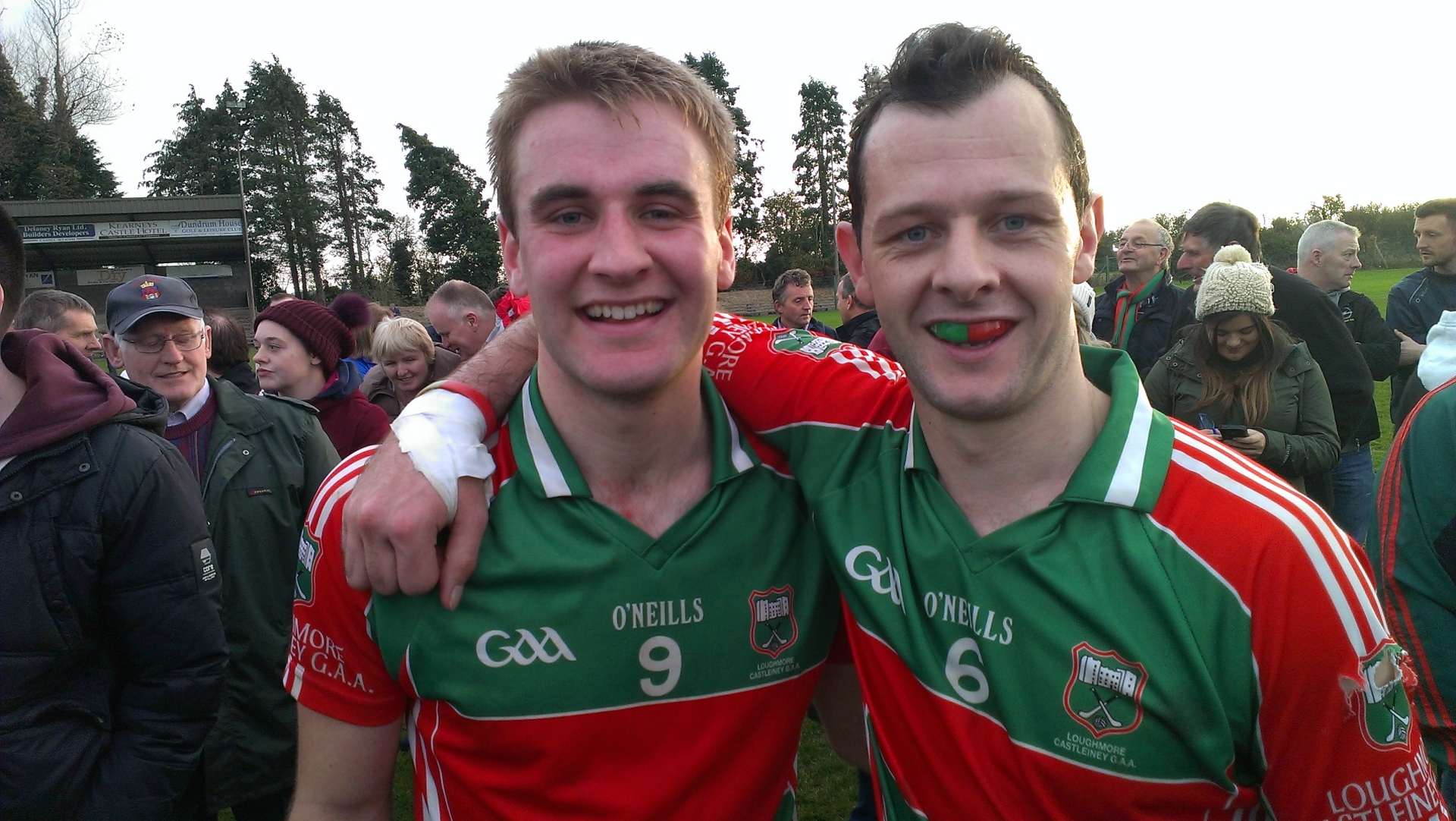 John McGrath and Ciaran McGrath (Loughmore/Castleiney) savour the moments after the final whistle.

Quickly captain Liam McGrath and John McGrath added points against a stunned Rovers and Loughmore went in three to the good at the break.

A dour third quarter almost passed without a score before Liam Treacy made it 1-7 to 1-3 after 44 minutes with the first point of the second half. And but for a superb save from Ian Browne from Joseph Hennessy soon afterwards the game might have been put to bed early for Loughmore.

Another point from Liam McGrath, the minor who captained Tipp to All-Ireland glory in 2011, stretched the lead to five points as it looked increasingly likely he would be lifting the O’Dwyer Cup also before day’s end.

After that the game faded out as a contest and it never looked likely that Loughmore would be caught by a side that could only score two points from play all day, both from Liam Boland.

That second point from play by Boland was quickly cancelled by Cian Hennessy and with six minutes to go Rovers needed a miracle. Two further frees was all they could muster from Liam Boland and Stephen Quirke to bring it back to three points. But the better team were full value for their victory and deservedly are now back at the pinnacle of Tipperary football, and who can argue with a team that has won three titles in four years. 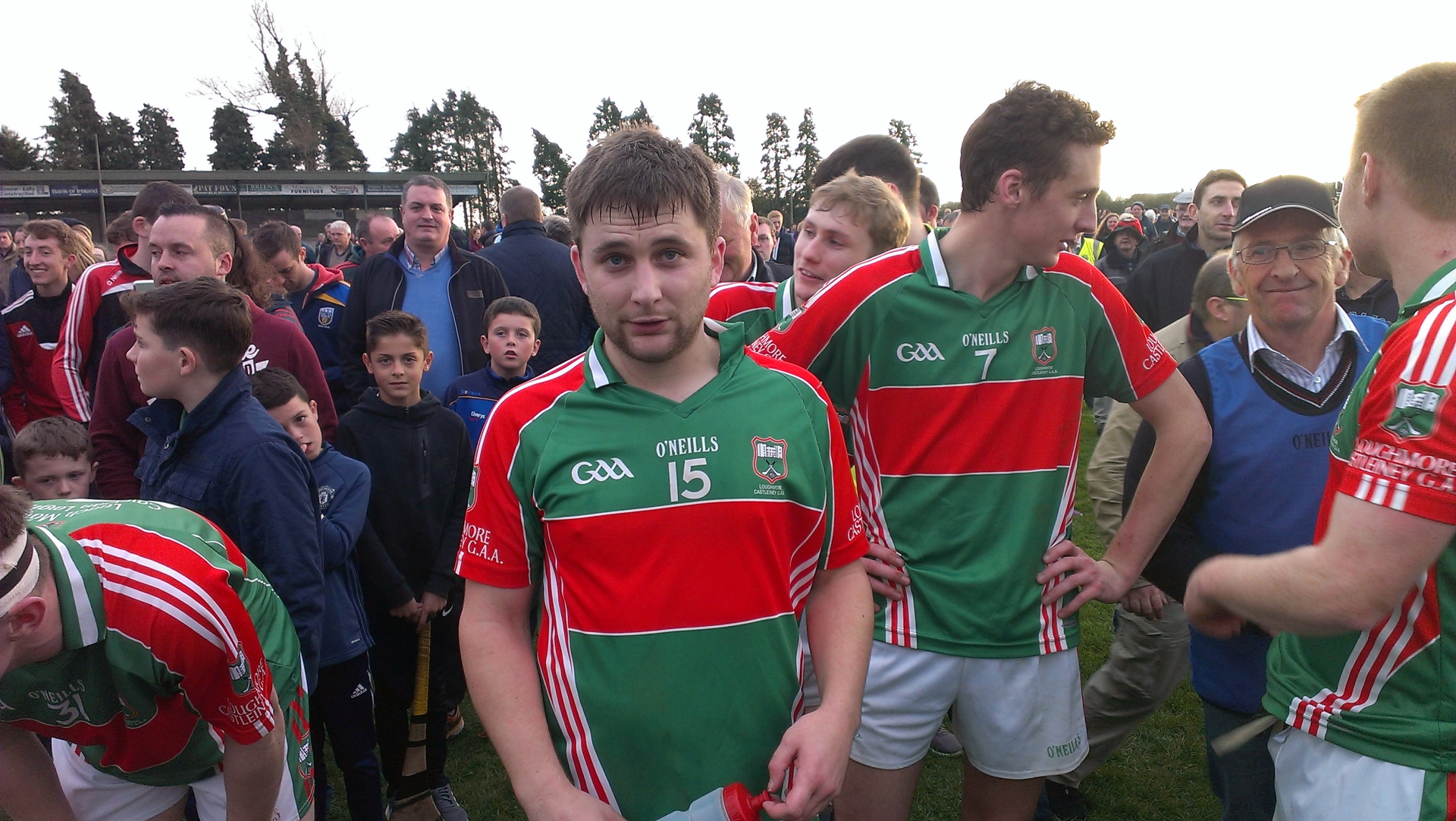 Cian Hennessy (15) was 'Man of the Match' in Sunday's County Final between Loughmore/Castleiney and Moyle Rovers.

Finals are for winning, and they only give out one cup at the end of the game, regardless of the performance. While it wasn’t an outstanding game, played before an attendance of 1,257 attendance, the winners did more than enough all day. Cian Hennessy was 'Man of the Match' for his overall performance and contributing 1-2, while John Meagher (supposedly joining the Tipp senior panel soon), Noel McGrath, John McGrath and Liam McGrath also stood out superbly. But it was a typical hard-working in-your-face Loughmore win based on team work and total commitment from start to finish.

For Rovers it will be a hard pill to swallow, a second county final defeat in succession. If last year they came away from Semple Stadium feeling they had left it behind them, they cannot justifiably feel likewise after today. It seemed as a team they were swimming against the tide all year and the loss of their leader Peter Acheson to emigration mid year was a huge blow, followed by injuries to some key players such as Darragh Dwyer, Morgan Irwin and Ciaran Kenrick. They suffered a further early blow today with Tadgh Fitzgerald’s loss. Having said that they did tremendously well to get back to the county decider. But today, they needed every crumb going to trouble Loughmore and they didn’t do themselves any favours with some woeful misses for frees and play over the hour, 13 in all.

Alan Campbell was a class act at the heart of defence and Danny Owens gave his all, but 1-6 over the hour with just two points from play was never going to be enough for their first county win since 2009. With only two contributing to the scoreboard on the day, it would always be an uphill battle. It will be back to the drawingboard once more at Monroe. The talent is there no doubt and if the work ethic and never-say-die commitment of Loughmore/Castleiney as an true example can be matched going forward, their day too will come soon.