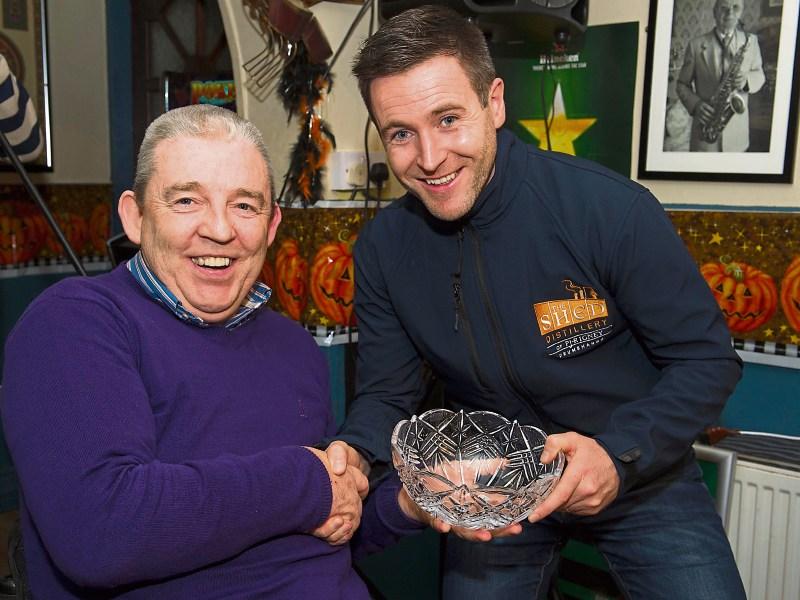 Michael was a bronze medal winner in the wheelchair section of the World Blackball Pool Competition which was held this year in the Glen Eagle Hotel, Killarney. The award was presented by Declan Ryan.

The winner of the Butler’s Bar Fethard Sports Achievement Award for the month of October was Michael Barry. Michael was a bronze medal winner in the wheelchair section of the World Blackball Pool Competition which was held this year in the Glen Eagle Hotel, Killarney.

The winner was announced at a special function in Butler’s Bar on Friday, November 4.

The award was presented by Declan Ryan who represented this month’s sponsor, Dalcassian Wines & Spirits. David also brought along a bottle of their new product to sample, ‘Gunpowder Gin’ – a refreshing herbaceous gin distilled using oriental botanicals and gunpowder tea. The winner of the ‘Mentor of the Month’ was Sharon O’Meara, St. Rita’s Camogie Club.

(1) David Flanagan – greyhound trainer David continues on his winning ways with three winners on the track during October.

(2) Colin Allen & Shane Kenny – winners of the HolmPatrick Cup for the second year in a row. The final against three other Irish clubs took place in St. Andrews Scotland.

(3) Michael Barry – bronze medal for Michael in the wheelchair section of  the World Blackball Pool Competition which this year was held in Killarney.