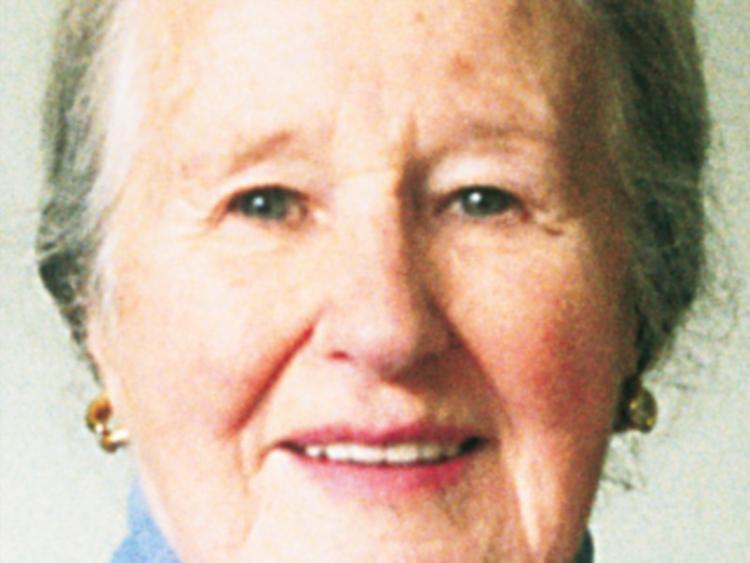 I was watching the moon rising from a low north-eastern sky. I had found a dark place in the backyard which gave me some shelter from the street-lights. The sky was clear except for a few wispy scattered clouds. It was the night when the moon (dubbed by the media The Supermoon) was closest to the earth since 1946 and it would be another 60 years before this astronomical phenomenon would again appear.

The Supermoon was perched at the top of the Sycamore tree in the backyard, when the telephone rang. Julia, accepted as the “most Irish” of my four German grandchildren, was presuming, rightly, that I was, like her “glued” (her description) to the sky. She was standing on the small balcony in her four-storey student apartment, as she described the golden glow on the layered roofs, the spires and medieval walls of her university city of Nuremberg.

I told her that it had been a late Autumn in Ireland, that the trees had only now shed their leaves which covered the road on which I live, and on which the very bright and big moon now shone. “It’s the moon on the yellow road,” I said, and we laughed.

Julia, like me, is a bit of a star-gazer, though she is far more knowledgeable than I am, since she is a member of an Astronomical Society and keeps up-to-date with all the latest published research on space-exploration. We have both shared some memorable sky-experiences; once seeing, from a cliff-top in Kerry, a very bright Venus, perched on the verge of the horizon and reflected in the huge Atlantic. It was just for a few seconds but it was magical.

I like to think that Julia's interest is part of the gene-pool, and goes right back to my grandmother, and her great-great grandmother, Mary Anne. I called her Grannie and Julia calls me Oma.

Grannie was born in 1870 on a South Tipperary farm, where the fields sloped down to the Suir in the shadow of the Knockmealdows. At aged 21 she married the son of a neighbouring farmer, became the mother of seven children and was a widow at the age of 40. With the help of her brother she continued to farm, and lived a very long life. I spent every available day of my school-holidays with her in a place that I loved.

I never discovered how Grannie knew so much about the night-skies. There were some books in her house, though none, as far as I can recall, on astronomy. I can only presume that her knowledge was handed down to her by her parents. She left school when she was 14, and yet she could still solve a problem in Algebra, could quote long poems by Byron and Shelly, sing Moore's melodies, recite long lists of the capital cities of Europe, and give dates of events in European history. The principal of her school wanted her to remain as a monitor (a trainee teacher) but as the eldest in her family, her mother needed her in the rearing of her brothers and sisters.

I always felt that, whatever her book-knowledge (as she would describe it) her knowledge of the physical geography of the Ireland of her time was very limited. She would go to Cahir every few weeks to shop, and Clonmel when she need “something special.” When the harvest was in and the threshing completed, she would have a holiday by the sea in Dungarvan. She visited Dublin on only one occasion.

My grandmother's nightly ritual was always the same. At about 9 o'clock, we knelt down on the kitchen floor, rested our elbows on the kitchen chairs, and with a glowing open fire warming our backs, we would say the Rosary. We would finish with prayers for our dead and living relatives and friends.

And then, if the sky was clear, we would leave the dim lamplight behind us and walk into the farmyard to look at the stars.

There, she told me about “our nearest neighbour,” the moon, and its phases. With her right arm above her head, she traced the inner planets - Mercury, Venus and Mars, and although we were standing in the farmyard, we were on Planet Earth, on that same orbit. And further out, there was Jupiter, Saturn, Uranus, Neptune. And away, away out there, beyond our vision, there was tiny planet Pluto. She always knew the time of the year during which each was in the ascendant.

And so it went on, during every clear night of school-holidays. With her right forefinger she traced The Plough and circled The Pleides and, both arms held wide, she spoke of the immensity of The Milky Way. Sometimes we saw a shower of meteorites and once we went into one of her higher fields to watch the Northern Lights.

That was my introduction to star-gazing - an occupation which has given me much pleasure, a permanent pain in the neck, and a subject on which I am still appallingly ignorant.

Grannie always finished these sessions with some more prayers. Thank God for the fine weather, or the rain, or the frost. Thank God for the healthy animals. Thank God for the crops and the harvest. And then we would go into the kitchen again and drink cups of cocoa before we went to bed. (She had “a thing” about not going to bed on what she called “an empty stomach”).

Julia is separated from her great-great grandmother by 150 years. Grannie saw in the sky and in her world, a reflection of the great glory of God. Julia tells me she doesn't “do religion.” But, in the glow of that recent Supermoon, it seemd to me that she and my grandmother and all the layers of family sky-watchers, shared a common awe, a wonder, a reverence, for the complexity, the beauty, of the Universe, and for Planet Earth where, for a fraction of the nano-second that we call Time, we live our very brief lives.