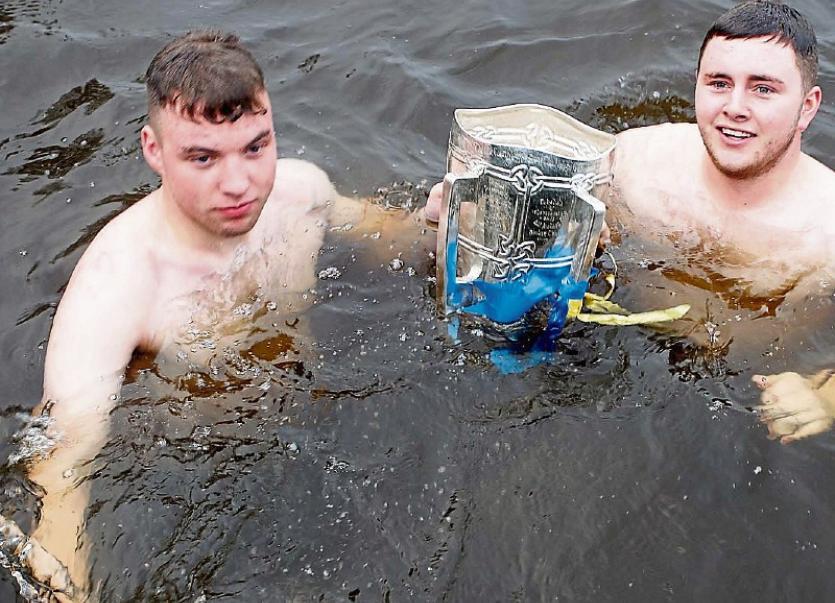 Liam McCarthy takes a dip in Lough Derg in the company of Newtown brothers Conor and Padraig Gill during the Christmas Day swim at Youghal Quay Picture: Bridget Delaney

Liam McCarthy joined the hundreds of people from Nenagh and surrounding areas who turned out to support a raft of Christmas Day fundraising events.

On a mild day, and despite wind and rain in the morning, up to 140 swimmers braved the waters of Lough Derg at Youghal Quay for the 25th Christmas Day swim.

Organiser Tony O'Flaherty told the Tipperary Star that everything went “according to plan”.

“We had the Liam McCarthy Cup, the All-Ireland minor hurling cup, as well as the two cups Burgess Duharra Camogie Club won - the Tipperay Senior Cup and the Munster Senior Cup,” he said. “We were just polishing them up for next year.”

Tony was one of four swimmers who have never missed a swim in the event's 25-year history, the others being Pat Gill, Eddie Ryan and Christy Manning. Indeed, Tony takes a dip in the lake every day.

He thanked all the volunteers who turned up to help out with safety and to give the swimmers a hot drink of soup and punch afterwards.

This year's swim was in aid of North Tipperary Friends of Bawnmore, North Tipperary Motor Neurone Disease and Ballina / Killaloe Community Resource Centre. The presentation of the proceeds of the swim will be made in Reidy's Bar, Newtown, on January 13.

Former Nenagh Mayor and nursing home operator Sandra Farrell got into the spirit of Christmas by organising the first Christmas Day dinner for people who may feel alone at this time of the year.

The event in Deborah's on Silver Street saw around 120 dinnrs being served.

“We had a very successful day. We served dinners to between 100 and 120 people, made up of those who attended and meals delivered to various households on Christmas Eve, Christmas Day and St Stephen's Day,” she said.

Ms Farrell said he hoped it would become an annual event.

“There is a lot of goodwill in our community. So many offered assistance or services to ensure it was a success,” said Ms Farrell, who thanked all those involved.

And on St Stephen's Day, several hundred people gathered in Ballycommon to see off the Ormond Hunt, with close to 70 riders taking part.