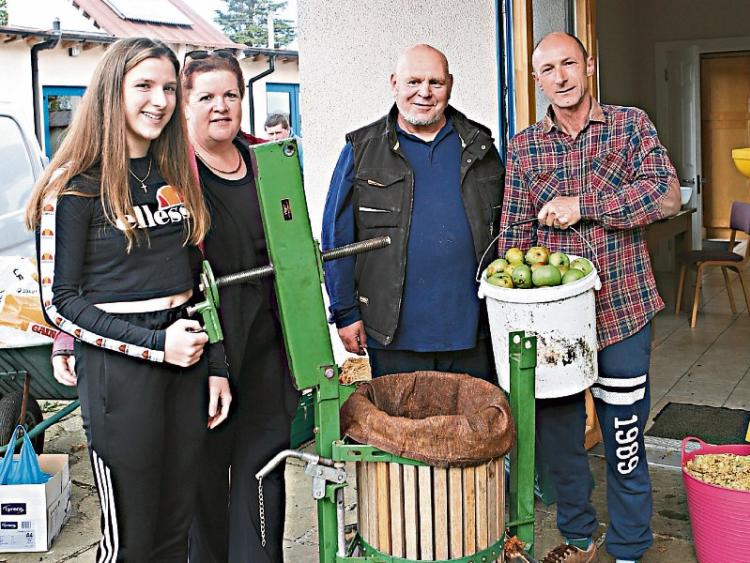 Carrick-on-Suir's Camphill Community celebrated its 20th anniversary over the past year and is planning a big re-union of former workers and volunteers for its 21st birthday next September.

The residential community for adults with intellectual disabilities has been based at Castle Street and at its Ballingarrane farm on the outskirts of Carrick since the autumn of 1996. And in September the residents, workers and volunteers marked the 20th anniversary with a party and built an outdoor pizza oven at Ballingarrane.

Áine Taylor, the Community's Deputy Person in Charge, is one of the original Camphill staff who set up the Carrick-on-Suir community. She says two of their first six residents are still with them: Helen Liffey from Birr and Co. Offaly and Mary Reade from Kilkenny.

Carrick-on-Suir's Camphill Community was founded by Camphill staff from the communities in Grangemockler and Ballytobin near Callan in Co. Kilkenny.

Áine, a native of Dungarvan, recalls that the Carrick Camphill Community started out in a house in the Slate Quarries at Ahenny with four residents while the properties they purchased at Castle Street were being renovated. One of the Castle Street buildings was a 1960s bungalow and the other was an old building that was used as a boarding house for years. While the bungalow simply required to be converted, they had to demolish the older property, as it ws unsound and rebuild it. While this work was taking place, the Community purchased May Cooney's farm at Ballingarrane for the residents.

Twenty years on, the Community now has 17 residents, who are supported by 20 Camphill workers and 20 volunteers. The Community's work is funded by the HSE and supported by HSE personnel. While the Community has some volunteers from abroad most of its employees and volunteers are locals. "We are probably one of the bigger employers in Carrick-on-Suir," says Aine.

Many of their residents are from the general South Tipperary area but Áine points out the Community has an open admissions policy so people from anywhere can apply to become a resident though admission is dependent on funding from the HSE.

Áine praises the HSE in Clonmel for the great support it has given the Community over the years.

And the Community received a firm thumbs up from HIQA inspectors when they visited over a year ago. "We received very good comments in the inspection report. We were quite ready for it. I find the HIQA standards ensure a good quality of life and safer, sustainable life for our residents."

Providing training for residents is a big part of the Camphill ethos. There is a weaving, art and food production workshop at Castle Street and training in agriculture and horticulture is provided at the farm and community garden at Ballingarrane.

Working side by side with the Camphill Community is the Journeyman Project based at the Ballingarrane farm that runs training programmes for young adults with intellectual disabilities.

Áine says one of the biggest changes the Community has experienced in recent years has been the development of supported independent living accommodation for some residents.

"People like to have their own space and now many of those who have lived in the the community house have their own accommodation. They are supported to live in their own house. We try to make sure everyone can achieve the most independence they can."

Carrick's Camphill Community has four houses for residents suited to "supported, self-directed living", at the rear of Castle Street, two at Gleann an Locha estate close to the Ballingarrane farm and one at O'Mahoney Avenue in the town.

The Community is also currently working towards creating "social entrepreneurship" opportunities for its residents in the areas of arts and crafts, agriculture and horticulture.

Local people had an opportunity to see the fine arts and crafts work created by the Camphill residents at their annual Advent Christmas Fair earlier this month.

Indeed, the Camphill Community has become an integral part of the life of the town over the past 20 years. Its residents have regular outings into the town centre and have become well known to locals over the years.

"We have a very nice relationship with the local community. We don't have any big signs outside our place calling attention to ourselves. We are just another house in the parish and town," says Áine.

"We find a lot of people in the town are very well disposed towards our residents and they look out for them and are very good to them."