A TALE OF TWO FETHARD BRIDGES 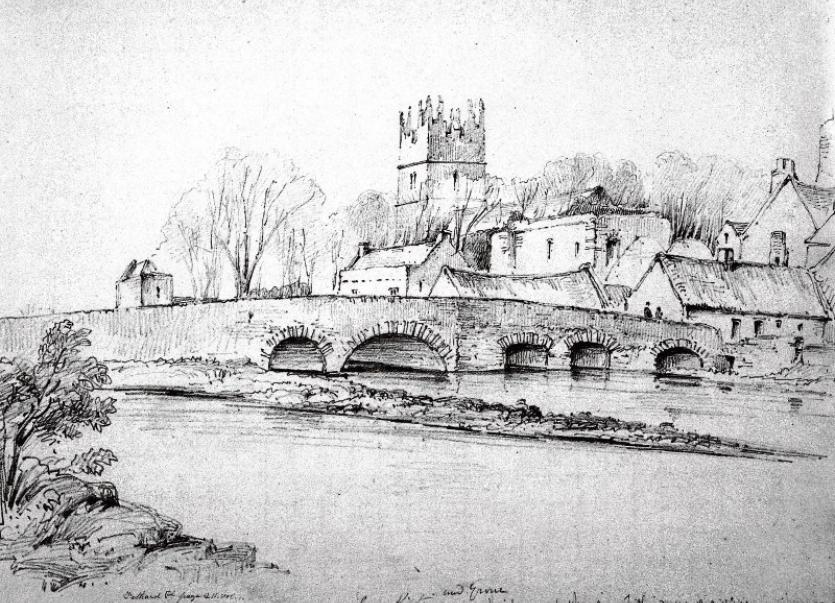 The proposed flood defence plans for Fethard by the Office of Public Works were made available for public consultation at two meetings, both in the Fethard Convent Community Hall.

Those who became aware of the plans and who read through the 300 page document were surprised to learn that the engineers in the OPW have rated Fethard as being at “high future risk” of flooding and therefore deemed to require correspondingly major remedies to address this risk.

The draft plans outline two options for the town, both costly and involving heavy engineering work. Each plan involves building walls and embankments. Option 1 has higher walls and banks whereas Option 2 has lower walls and banks but includes dredging a mile of the river bed above and in the town. Based on various considerations Option 2 has been chosen by the OPW, pending the outcome of submissions and various other assessments.

The OPW proposal document does not pull its punches in outlining the negative effects of all this work for example stating that there will be long term permanent impacts on river health from dredging due to the release of sediment, and that “the flood defences and upgrade works proposed to the south east of the bridge at the west end of Main Street will impact view and will have a permanent negative impact”. It also states that “proposed flood walls, gates and embankments are likely to permanently change the setting of Fethard Town Walls which is a national monument so that they are completely altered in some areas.”

A group of local residents including members of the Fethard Historical Society, the Business and Tourism Group and the Fethard and Killusty Anglers became aware of the flood plans in late November and began to examine the OPW document in some detail in the few weeks leading up to the December 13 deadline. They compared the high flood rating with their own experience of flooding events in the town. They talked to other residents about the behaviour of the river after heavy rain. They looked at photographs, old prints maps and documents, and walked the river banks.

The group came up with some interesting findings which may be summarised as follows:

• Fethard does not have a history of significant flooding, though an event in 2012 demonstrated two important blockages to river flow which are not mentioned in the OPW plans.

• The concrete footbridge at Abbey Mill acts as an effective dam in high water due to its low height, small arch and high parapet. The dam is a clear cause of water backing up into the town.

• The four arched bridge at Watergate Street also acts as a dam after heavy rain, backing up water which can rise to road level and flow down the Kilsheelan road towards the Creamery. However, there is an additional fifth arch on the north (town) side of the bridge which has been buried under soil for the past 50 years and the existence of this buried arch was also overlooked by the OPW engineers who surveyed the town. (There is actually a sixth arch, also buried, on the south side of the bridge beside the Council yard.)

• One of the group discovered century old documents referring to diversion of tributaries of the upper Clashawley into the River Suir in the 1800s thus explaining why the river is smaller now than before and why the extra arches were needed in the past to accommodate the higher water levels.

Based on these observations, the group made the following suggestions:

(2) Re-open the blocked fifth arch at Watergate Street. This would be a very simple operation involving digging out clay and stones and which could also enhance the appearance of this beautiful medieval bridge while allowing the release of dammed up water in flood conditions.

The above two measures would certainly cost much less than the 1.5 million euro estimated cost of the OPW proposals and would have the added advantage of enhancing rather than detracting from the unique riverside environment of our amazing medieval town.

These suggestions have been incorporated into a number of written submissions to the OPW from the following groups: Fethard Historical Society, Fethard Business and Tourism Group, Fethard and Killusty Anglers and a Fethard Community Group.

Tipperary Council has a further opportunity to make a submission to the OPW by January 13th, and it is hoped that the suggestions outlined above will be supported by the Council to ensure a favourable outcome.